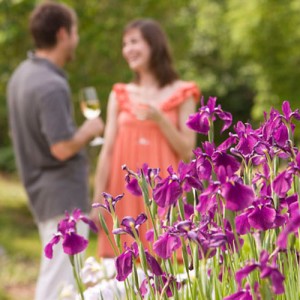 Relax on Thursday evenings throughout the summer at Flowers After 5. Stroll through the gardens; enjoy live music, wine and beer, dining and shopping.

Tickets for Flowers After 5 will be limited and timed tickets will be required for all guests, including members.  Tickets will be available online ONLY (no walk-ups). The event is rain or shine; no refunds. Cost is $14 adults; $11 senior citizens (65+); $8 children age 3-12; free for children under 3 and members. Included is the brand-new, nationally traveling exhibit M&T Bank: Wind, Waves and Light, featuring large-scale, stainless steel kinetic sculptures that move and change with the wind.

With more than 50 acres, guests can socially distance while exploring the gardens. Instead of one band at one location, the performers are splitting into soloists or duos in two locations, allowing for social distancing and providing background music for evening strolls and dining. The second and fourth Thursday nights are also Fido’s Nights when the Garden partners with the Richmond SPCA and leashed dogs are allowed.

Guests are invited to bring their own blankets and chairs. Food is not allowed to be brought into the Garden, but there is an option to purchase food online to eat outside in the Garden. Exciting new dining options coming soon, please check back for updates and details! Beer, wine and hard seltzers will also be available for purchase in several spots throughout the Garden.

Enjoy Flowers After 5 every Thursday on evenings ’til 9 p.m.  No outside food or drink is allowed inside the Garden; food and drink are available for purchase online.

5 – 8 p.m. Wine and beer available for purchase throughout the Garden. Food may be ordered online from your smartphone.
5 – 8 p.m. Live music concerts at Bloemendaal House and elsewhere in the Garden

Fidos After 5: The Garden partners with the Richmond SPCA on the second and fourth Thursdays of August and September to allow leashed dogs at Fidos After 5.

Pokemon Go: If you’re a player of the popular Pokemon Go augmented reality game, there are Pokemon in the Garden and evening is a great time to play!

The Garden has extended hours until 9 p.m. on these nights with food, wine and beer available for purchase and live music from small, socially distanced soloists and/or duos in two locations in the Garden.

The line-up includes performers from the following bands:

Drawing on their diverse musical backgrounds, The Whiskey Rebellion mixes the spontaneity of bluegrass, the collectiveness of jazz, and the urgency of rock and roll to create their own unique take on everything from traditional bluegrass to anthemic party favorites. The band covers a wide array of artists ranging from The Beatles to The Talking Heads to Guns ‘n’ Roses, but their approach is always steeped in their acoustic roots and uniquely lends itself to being both listenable and danceable.

Paul Urban is a Tidewater blues/jazz guitarist who also plays some country and pop music. With three CD’s of original music under his belt, you might hear a few original songs too. From George Benson to Eric Clapton and everything in between, you’re sure to hear something you can connect with!

Kenneth Von Kellner, is a Richmond musician and educator who specializes in Jazz and Blues. On August 13, he will play three hours of America Standards that range from Cole Porter, Rodgers and Heart, Ira and George Gershwin, to Louie Armstrong, Frank Sinatra, Nat King Cole, Ella Fitzgerald and Chet Baker.

Hazeltone a regional Roots Rock original music band has been playing their songs for the last 10 years with the band’s influences coming from The Doors, John Mayer,  Neil Young and others

U&I Plus Latin Band is a Cover band native to Richmond, Virginia. We perform a mix of Afro Caribbean Salsa infused with a bit of Old School R&B. Many of our covers you will recognize, with just a twist of Latin flavor!

Høly River is founded by multi-instrumentalists Laney Sullivan and Jameson Price. Fusing together the pulse of drone pop, worldly instrumentation, this experimental music would best be described as a landscape, as a biome all its own. This musical phenomenon has come to be known as, Earth folk, a type of music inspired thematically by the natural environment: flora, fauna, soil, stars, and the human experience. From harmonium engulfed melodies to mouth-harp stomp grass, Høly River taps into an embodied and innate celebration of internal and external worlds, attempting to bring them closer together with each beat. On record or in-person, a listener is entranced in the soaring vocal ballads bathed the in moonlight of dance beats and folk-inspired roots. The music of Høly River carries the message of humanity’s need for reconnection with itself and the earth. Mystically political and wholeheartedly grassroots this DIY band finds themselves playing on large festival stages as well as backyard fire pits of intentional communities around the world.

Love Redemption  is the union of Wayne and Jessica Pooley.  While their connection to each other goes far back, their story really began with a chance encounter in 2012 that would reunite their then separate lives and mark the start of their musical collaboration.  The deep connection between them is hard not to feel when they play music together.

With an emphasis on strong vocals and intimate harmonies, the couple weave their way through a broad variety of some of their favorite music. Having a disparate group of influences between them,  Jessica and Wayne draw on decades of American Folk, R&B, Gospel, and Rock and Roll from artists such as Ray Charles, Amy Winehouse, Chrissie Hynde, Leon Russell, J.J. Cale, Bill Monroe, Patty Griffin, Gillian Welch and others. Often featuring the talents of some of the areas finest musicians as well as national touring artists, their arrangements can scale down to an intimate private setting or up to the unbridled energy of a full band.

Dead Letter Officers – Born through an undying love of the jangle, Richmond’s R.E.M. merchants, the Dead Letter Officers, focus on early R.E.M. music from the early to late 1980s! Waking at the dawn of the college rock movement, DLO recreates the early 1980’s energy and songcraft of R.E.M. that became the soundtrack to countless college road trips and all-night dance parties throughout the South.

Rick Schaffer has become synonymous with a good time during his 20 years on the road with Mid-Atlantic favs BS&M, The Jangling Reinharts, Little Known Legends and his myriad solo appearances in his native Richmond. He’s played it all – rock clubs, weddings, corporate events, summer venues, and college parties. The secret to connecting with an audience, Rick says, is delivering the right set of songs for each individual event, and with his innate and ever-expanding knowledge of hundreds of classic and alternative rock songs, rootsy anthems, and even TV themes, he has a lot of them to choose from. Rick Schaffer will tell you that they don’t keep inviting you back to the stage unless you connect with your audience. He’s more than just another guy with a guitar, on stage and off, he has a knack for making you feel good.

Antique Melody Show is a nostalgic matinee of 1920s, 30s and 40s radio stars such as Annette Hanshaw, Mae West, Fats Waller, Eartha Kitt and Jo Stafford – just to name a few. Sprinkle in some Squirrel Nut Zippers, Postmodern Jukebox and other roots jazz contemporaries and you’ve got a confection of romantic popular / jazz standards, Tin Pan Alley, ragtime and Broadway show tunes coming at you from their unique style of stripped-down arrangements.

Jordan and Erin – Folk-rock duo, Jordan Tarrant and Erin Frye have been sharing the stage in the local music scene for years! They come together once in a while to play a solid mix of their own original tunes and covers.