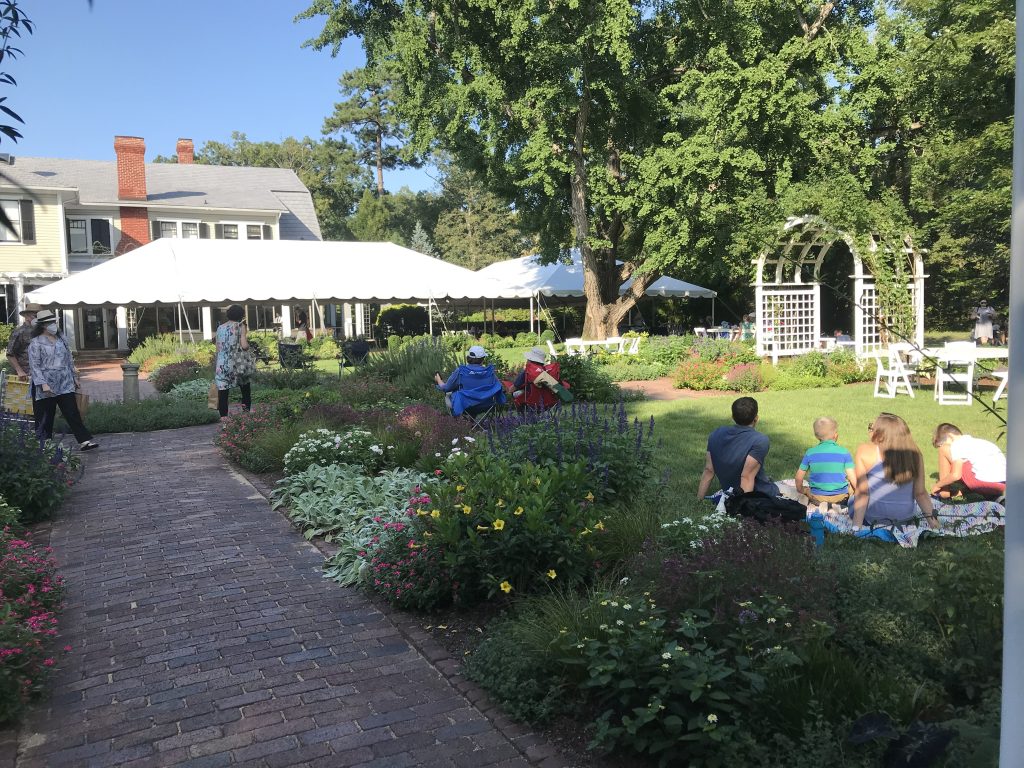 Relax on Thursday evenings mid-May through mid-September at Flowers After 5. Stroll through the gardens; listen to relaxing live music, and enjoy food and drinks. (Food and drink are available for purchase; outside food and drink are not allowed to be brought into the Garden.)

Guests are encouraged to bring their own lawn chairs and blankets.

Please read our information carefully as we have made changes with your safety as the top priority. Be sure to read Planning Your Visit so you’ll be aware of our safety protocols.

Advanced tickets are available, but not required, for this event.
The event is rain or shine; no refunds. In cases of hazardous weather, the event would be canceled. It’s summertime in Richmond, so we monitor the weather very closely and if there is a high likelihood of strong storms during Flowers After 5, we make the decision at noon whether or not to cancel, based on the forecast. We post the information as quickly as possible to the website and social media; it’s always a good idea to check before you come!
Admission to this event is free for members and regular Garden admission for non-members. (Not a member? Consider joining.)

With more than 50 acres,  there’s plenty of room to spread out and explore the gardens.
The second and fourth Thursday nights are also Fidos After 5 nights when the Garden partners with the Richmond SPCA and leashed dogs are allowed.
If you’re a player of Pokemon Go augmented reality game, there are Pokemon in the Garden and the evening is a great time to play!

May 19 – U&I Plus Latin Band, a cover band from Richmond, performs a mix of Afro Caribbean salsa infused with a bit of old-school R&B. You will recognize many of these covers with just a twist of Latin flavor added!

May 26 – Run Forrest Run, a cover band featuring music from U2, the Bangles, the Cranberries, Cyndi Lauper, Pearl Jam, Radiohead, the Beatles, the Police, Queen, the GoGos, Toad the Wet Sprocket and more.

June 2 – Brass in Pocket present the exceptional music of The Pretenders. Inspired by the semi-autobiographical songwriting and invigorating singing style of The Pretenders leader, Chrissie Hynde, Jessica Pooley leads the foursome through a wide range of iconic as well as lesser-known songs that bridge the gap between post-punk, early modern rock, and top 40.

June 9 – The Atkinsons meld roots, country, and rock music into their own style of rambling swing rock & roll. Heartfelt story-telling is at the core of the Atkinsons, and it is complemented with three-part harmonies layered over mandolin, fiddle, drums, bass and electric guitars. The band’s influences run the gamut from country, mountain, bluegrass, to straight-up rock and roll music, and the sound ends up being quite a musical stew.

June 16 – Dead Letter Officers focus on early R.E.M. music from the early to late 1980s! Waking at the dawn of the college rock movement, DLO recreates the early 1980s energy and songcraft of R.E.M. that became the soundtrack to countless college road trips and all-night dance parties throughout the South. Though they would later become the biggest band in the world for a time, at their beginning, R.E.M. was an intelligent, rocking bar band with rollicking songs and presence. DLO brings to life R.E.M.’s early sets in a live setting, recreating the IRS – era recordings with tireless enthusiasm. DLO creates a musical cacophony that harkens back to a simpler, more exciting time.

July 7 – Serenata!  In the Spanish language, “Serenata” translates to “serenade.”  Serenata features music from Latin America, the Caribbean and Spain. Their repertoire includes a mix of salsa, Cuban son, bachata, merengue, cumbia, bolero, and rumba flamenco. We “serenade” our audience with lively Latin music in a warm, intimate setting!

July 14 – Abrams Bridge a band of brothers performing all of The Boss’s biggest hits, live staples and deep cuts! A tribute to the one and only Bruce Springsteen and the E Street Band!

July 21 – Bruce Ewan Harmonica Maestro – has been a part of the Washington, D.C. blues scene for more than four decades and since 1995, Ewan has been part of the international blues scene as well, touring Latin America, Europe and South Africa to great acclaim. In the United States, Ewan has shared the stage with artists like John Lee Hooker, Albert Collins, Carey Bell, Bobby “Blue Bland” and Bobby Radcliffe

July 28 – Jay Brown’s Grace Street Seven is a vintage-style jazz septet that performs songs in the tradition of early American dance bands from the 1920s to 1930s. Renowned as the little band with a BIG sound, this versatile group specializes in playing Victrola record transcriptions of Jazz Age classics from the likes of Al Bowlly, Cole Porter, Fletcher Henderson, Ray Noble and Irving Berlin. The instrumental line-up includes trumpet, clarinet, saxophone, tenor banjo, piano, upright bass and percussion/drums. Full of sophistication and exuding the nostalgia of early American Jazz, expect a dapper yet cheeky performance with a few fun surprises.

August 4 – Jackass Flats an ultra-talented Virginia quintet comes from a long-standing bluegrass tradition but creates a wholly original sound by weaving their melting pot of acoustic roots music with the sounds of electric rock’n’roll. Jackass Flats combines a unique blend of jam band rhythms with twangy versions of contemporary hits that can elevate any event into a unique, rousing experience. Expect a repertoire that runs the gamut from Johnny Cash to The Beatles, Willie Nelson to Prince, Smokey Robinson to The Rolling Stones, all delivered with warm southern charm and infectious energy.

August 11 – Luke Bobbitt and The Crocodilians will keep your foot tapping and wanting to sing along all night long! Bringing a unique and diverse setlist, Luke and his band of Crocs tackle all kinds of songs ranging from Rock to Country and plenty of surprises. Luke has played around central Va for 14+ years in both bands and as a solo artist. He brings his Springsteen-esqe gritty, authentic storytelling voice to those familiar songs ranging from classic rock, pop, country, and his own songwriting.

August 18 – WKNDR  fuses classical flute with iconic guitar riffs, modern folk-rock, and a penchant for all rhythms syncopated!  WKNDR’s “alternafolkrock” sound has something with everyone. Favorite artists to cover include Fleetwood Mac, The Head and The Heart, and Wilco, and their original music celebrates the good things in life.

August 25 – The Haze and Dacey Collective revels in lilting melodies, tight harmonies, and compelling rhythms that make toes tap and bodies sway. Original songs written by Haze are interspersed amongst covers both familiar and obscure. The duo skips nimbly from folk-pop to alt-country to roots-rock, creating a homegrown organic sound with upright bass, acoustic guitar, piano, shaker, tambourine, and mouth-horn. The Haze & Dacey Collective is what happens when the folk(ish) duo brings additional musicians into the mix to fill out the sound and spice things up.

September 1 – Antique Melody Show is a nostalgic matinee of the 1920s, 30s, and 40s radio stars such as Annette Hanshaw, Mae West, Fats Waller, Eartha Kitt and Jo Stafford – just to name a few. Sprinkle in some Squirrel Nut Zippers, Postmodern Jukebox and other roots jazz contemporaries and you’ve got a confection of romantic popular / jazz standards, Tin Pan Alley, ragtime and Broadway show tunes coming at you from their unique style of stripped-down arrangements. AMS additionally lauds a growing collection of resonant original songs evocative of the same era. This band features Marilyn Brown on vocals, Artie Mayer on guitar, Andrew McCarty on piano & trombone, Allen Cole on clarinet, Kassia Arbabi on violin and Carter Blough on upright bass. If you’re looking for jazz in Richmond, AMS delivers it in a vintage, pure, speakeasy package that is simply the sweeter side of swing.

September 8 – The Original Elbe-Musikanten German Band plays in the traditional style of German, Austrian, Czech and Slovak music such as polkas, marches, waltzes as well as other favorites.

Plan ahead! See our long-range calendar.