Celebrate the fall season with the dynamic duo of local mixologist Beth Dixon and Restaurant Associates’ Chef Jared Serr as they team up for a demonstration showcasing how to create fabulous craft cocktails and delicious paired small plates. Beth showcases the orchard through a Walnut Old Fashioned, Pear-ginger Margarita and Jack Rose featuring Applejack and homemade grenadine. Following the creation of each cocktail, Chef Jared shows you how to highlight orchard flavors with his paired plates. Fee includes cocktail samples and food pairings. 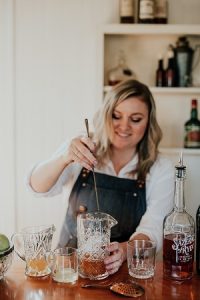 Beth Dixon has been in the restaurant industry for over 19 years. She started her bar career behind the stick at Can Can Brasserie. In her almost 7 years at Can Can she honed her skills as a professional bartender. When time came to move on, she, rather serendipitously, landed at Pasture. She worked the bar at Pasture for almost 7 years, where she fine-tuned her style with Southern flare and hospitality, and eventually became the bar manager. Known for her shrubs and high acid cocktails, Beth was put to the challenge in her role as Bar Manager at Perch, Mike Ledesma’s Pacific Rim inspired restaurant. Beth is the sole proprietor of Salt and Acid, where she focuses on cocktail menu consulting, bar staff training and private events. She currently serves as President for the Richmond, VA chapter of the United States Bartenders’ Guild and occasionally tends bar at L’Opossum in Richmond, Virginia. 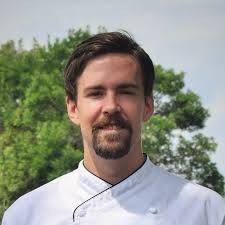 A graduate of the Culinary Institute of America, Restaurant Associates Executive Chef Jared Serr brings skills to Lewis Ginter Botanical Garden from fine dining restaurants in New York City. For the past 6 years, Jared has served as Executive Chef in establishments within the Compass Group, including Chartwell’s Higher Education Dining Services in Ashland Virginia. Having grown up working on farms, his passion is farm to table cuisine. He currently resides in Ashland Virginia with his beautiful wife and toddler son and daughter.