Learn more about early cycling history in Richmond with this  exhibit, which includes details about the Lakeside Wheel Club — now Lewis Ginter Botanical Garden. While this exhibit “lives” in the Garden’s library, it may travel to other locations throughout the Garden September 19 – 27.

Lewis Ginter Botanical Garden is honored to be part of the 2015 UCI Road World Championships coming to Richmond in September. The Garden is the start venue for the elite men’s and women’s team time trial events on September 20, 2015. See other activities the Garden has planned during the week of the Worlds.

The Garden’s involvement is a natural fit. The historic home on the property, Bloemendaal House, was originally the Lakeside Wheel Club. Built in 1895, the structure was one of the nation’s first “wheel” or bicycle clubs and an integral part of early cycling history in Richmond. Now, 120 years later, history has come full circle and the property will again be at the center of cycling, not only for Richmond, but the world.

The eight panels in the exhibit address different topics, including:

The Cycling Craze at the Turn of the Century: The popularity of cycling soared in the late 1800s with the arrival of safe, affordable bicycles available to all ages and genders. Richmonders were caught up in the cycling fervor; favorite routes were established and social clubs were formed.

Women and Fashion in the Bicycle Boom: Women embraced cycling, in large part due to the freedom the sport provided.

From Bicycle Club to Botanical Garden: The cycling craze had cooled by 1901, thanks to electrified street cars and the automobile. After Lewis Ginter’s death in 1897, the wheel club property reverted to his estate. His niece Grace Arents bought the property sometime around 1911. She added a second story and for a short time it was a children’s hospital. Eventually it became Arents’ residence until her death in 1926. Arents’ will left the property and an endowment to the City of Richmond with the stipulation that a botanical garden be created in honor of her uncle. She also left life rights to her close friend Mary Garland Smith, who lived on the property until her death in 1968. 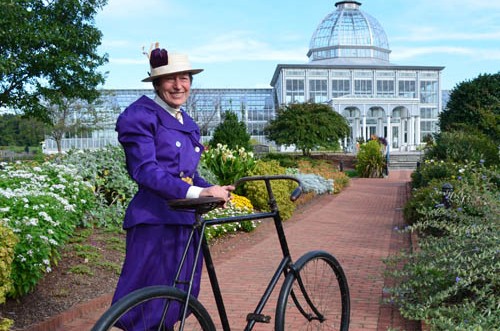 Lewis Ginter Botanical Garden was chartered in 1984 and opened to the public in 1987. With more than 50 acres of lush gardens, a Conservatory, dining and shopping, it has become one of the most-visited attractions in the Richmond Region. The Garden was voted number 2 in USA Today’s 10Best Public Gardens contest and other recent awards include: one of the “Top 10 North American Gardens Worth Traveling For” (BBC Travel) and one of the Best Botanical Gardens in the U.S. (Travel Channel).