GARDEN TO GLASS:
Anything But Gin Botanical Cocktails

Gin is a natural pairing in botanical cocktails, but local mixologist Beth Dixon wants to change things up and take on the challenge of creating botanical cocktails with anything but gin. Join Beth as she creates three exciting craft cocktails to bring the garden to your glass in an Elder-Fashioned using St. Germain and rye whiskey, the Bothan highlighting chamomile infused tequila, and a Singani Mojito. During the demo, sip samples of each cocktail as you enjoy expertly paired small plates. Fee includes demonstration, cocktail samples and food pairings.

Our Garden continues to follow CDC recommendations and state guidelines for preventing the spread of COVID-19. Properly worn masks are required for indoor class participants regardless of vaccination status unless eating or drinking. Non-vaccinated participants are also required to wear masks when outdoors and unable to maintain 6 feet of social distancing. The Garden reserves the right to implement additional safety measures. Any updates will be communicated prior to class, if possible. 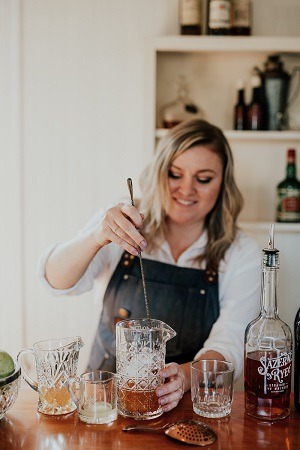