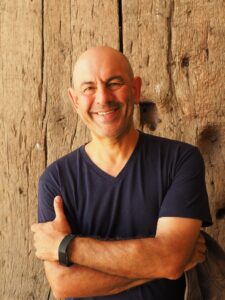 Simon Majumdar is a world-renowned broadcaster, food writer, speaker, author and cook who has dedicated the second half of his time on this planet to fulfill his ambition to “Go Everywhere, Eat Everything.” It is a journey that has taken him to all fifty states and to dozens of countries around the world. He is also a restaurant critic for Time Out Los Angeles and has written hundreds of articles for such outlets as The Guardian, Foodnetwork.com, and The Times of London. He has also written three books: “Eat My Globe” (2009), “Eating for Britain” (2011), and “Fed, White and Blue” (2015). Simon is also a well-recognized television personality, regularly appearing on shows such as Guy Fieri’s Tournament of Champions, Alex vs. America, Iron Chef America, Supermarket Stakeout, Guy’s Grocery Games, Cutthroat Kitchen, Beat Bobby Flay, The Next Iron Chef (Food Network), The Best Thing I Ever Ate (Food Network and Cooking Channel), and EAT: The Story of Food (Nat Geo). He is also the creator, writer and host of the hit food history podcast, “Eat My Globe: Things You Didn’t Know You Didn’t Know About Food.”