It all begins with the crust! Executive Chef Anne Maury Haapala begins by demonstrating how to make an easy food-processor pie dough.  She’ll cover how to handle the dough and how to fix common crust catastrophes.  Anne says, “I’m not a baker and maybe you aren’t either, but we can do this!”  Anne will use her neutral pie dough to create savory and sweet traditional 9-inch pies and several varieties of hand pies, including some that can be frozen and reheated for easy meals.  For those of us who need gluten free recipes, Anne will also cover how to make a delicious gluten free crust.  Anne’s hour and a half demonstration is followed by a delectable lunch featuring some of the recipes discussed. 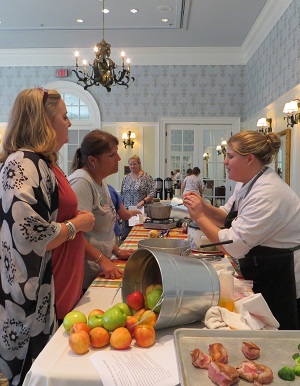 Chef Anne is the Executive Chef for the Garden’s caterer, Meriwether-Godsey.  She has a degree in hospitality and tourism from Virginia Tech and studied Culinary Arts at Johnson and Wales University in Charlotte, North Carolina.

View other winter/spring Lunchtime Lectures at the Garden: