Butterflies have mastered of the art of disguise. With so many natural predators, including birds, spiders, reptiles, insects (wasps, flies, mites), and small mammals, they have disguise themselves in order to survive. From their early larva stage to the fully emerged adult butterfly, these Lepidoptera have some extraordinary abilities to mask themselves from the rest of the world.

Chrysalids come in so many different shapes, sizes, and forms. Each has a specific design meant to protect the precious cargo inside. Here at Butterflies LIVE!, we receive between 250 and 400 chrysalids each week. As you can see, some of the chrysalids resemble brightly colored green leaves while others are more bark-like in nature. The chrysalid takes on the coloration of the surface from which it hangs in nature. So, if a caterpillar decides to hang from a branch, the chrysalid will look more brown and bark-like or if it hangs from a leaf it could be bright green such as the Papilio palinurus chrysalid below. 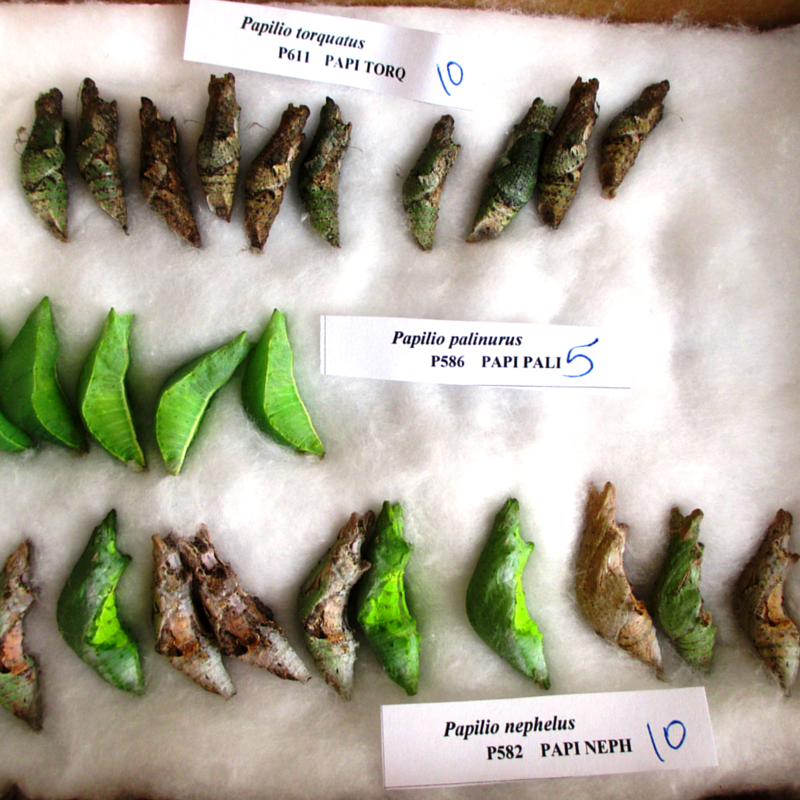 Once the butterflies emerge, they are equipped with even more tools to hide from predators. Several camouflage techniques come into play including distinct marking on the underside and topside of their wings, resting on surfaces that blend in with their wings, and resting with their wings closed. The king shoemaker (Archaeoprepona demophon) and the pearly leafwing (Consul electra) both have very dull patterns on the underside of their wings but the pearly leafwing, in particular, has masterfully disguised himself as an actual leaf. 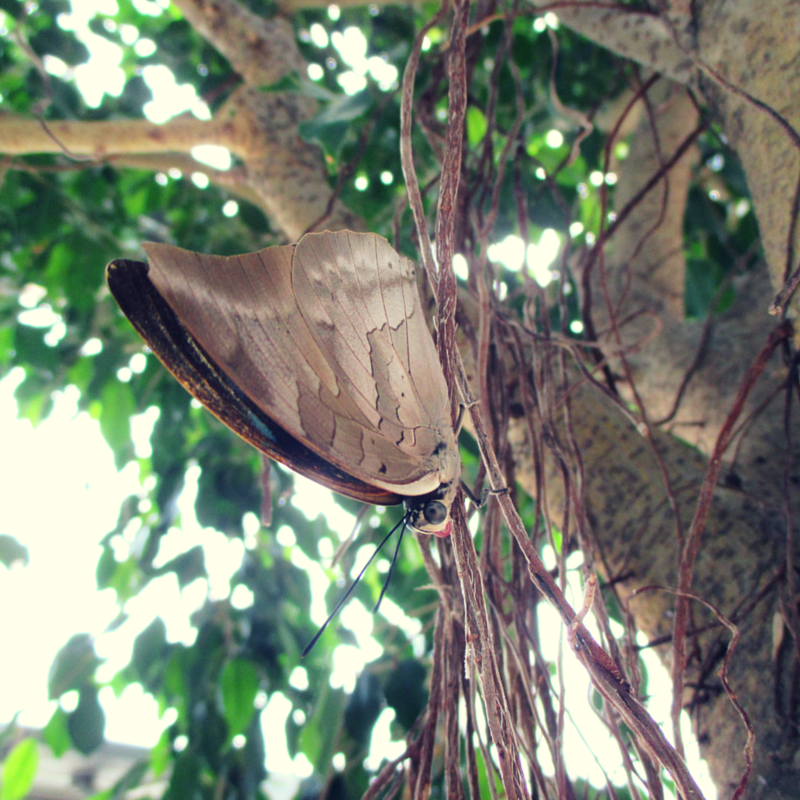 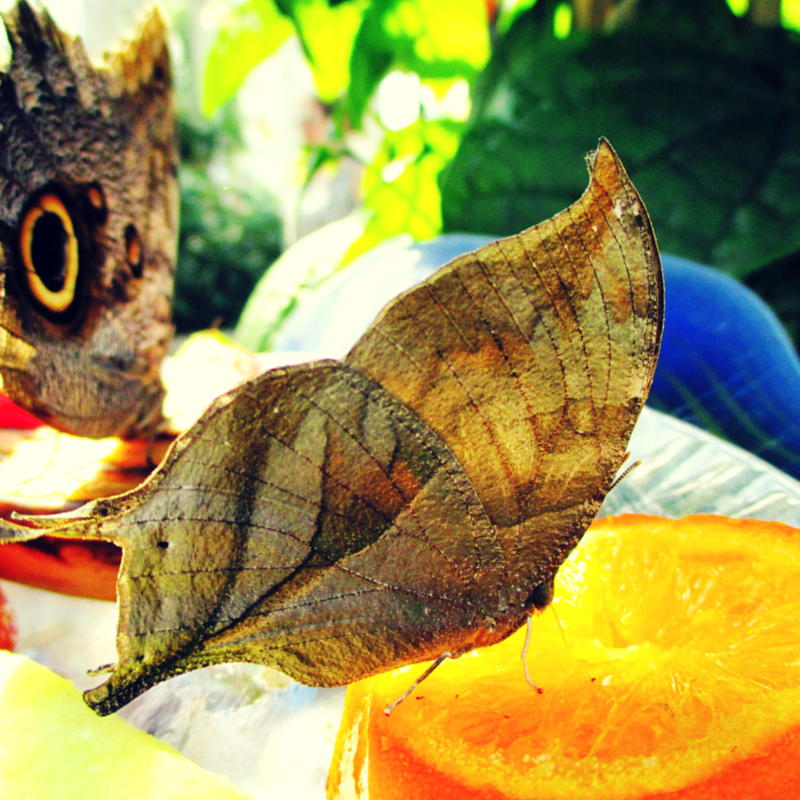 The common morpho (Morpho peleides) also implores several techniques to mask itself. Here we have one resting on a pair of blue jean shorts. Although the colors do not exactly match, resting on similar colored surfaces will help to camouflage this butterfly. One would think that having such bright colors would work against the butterfly’s ability to protect and disguise itself. However, butterflies partake in an interesting behavior known as flashing. The common morpho, and other brightly colored butterflies, will open its wings quickly or flash its wings to daze and confuse their predators when they get too close. 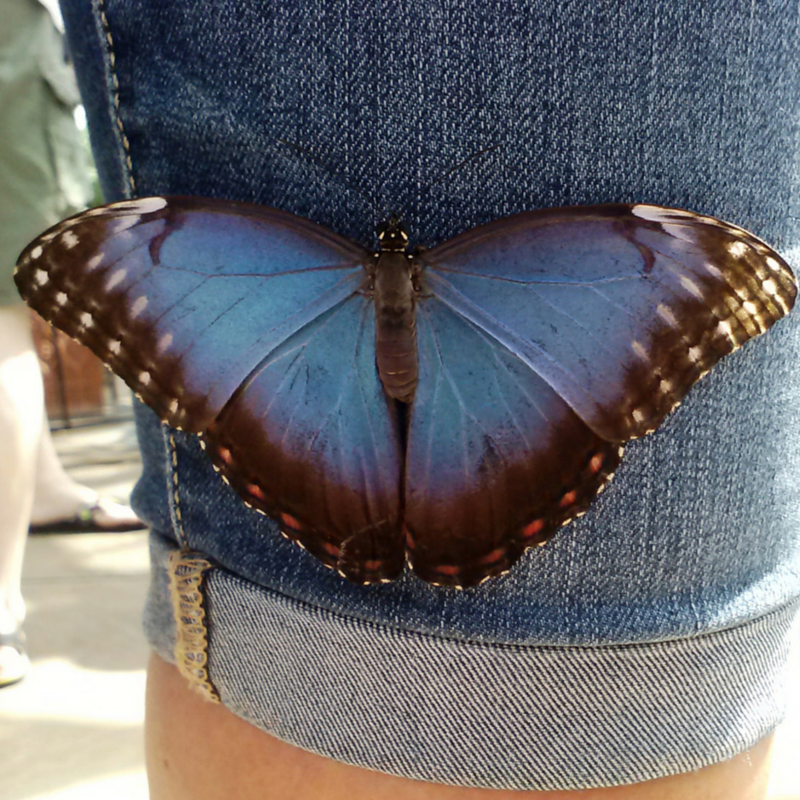 A common morpho (Morpho peleides) resting on my blue jeans to blend in.

Patterns are a great way to disguise oneself. Although this tailed jay (Graphium agamemnon) may seem obvious to us, it is very difficult to spot from a distance. Their distinct markings allow them to successfully hide in thick green brush or forests from predators. 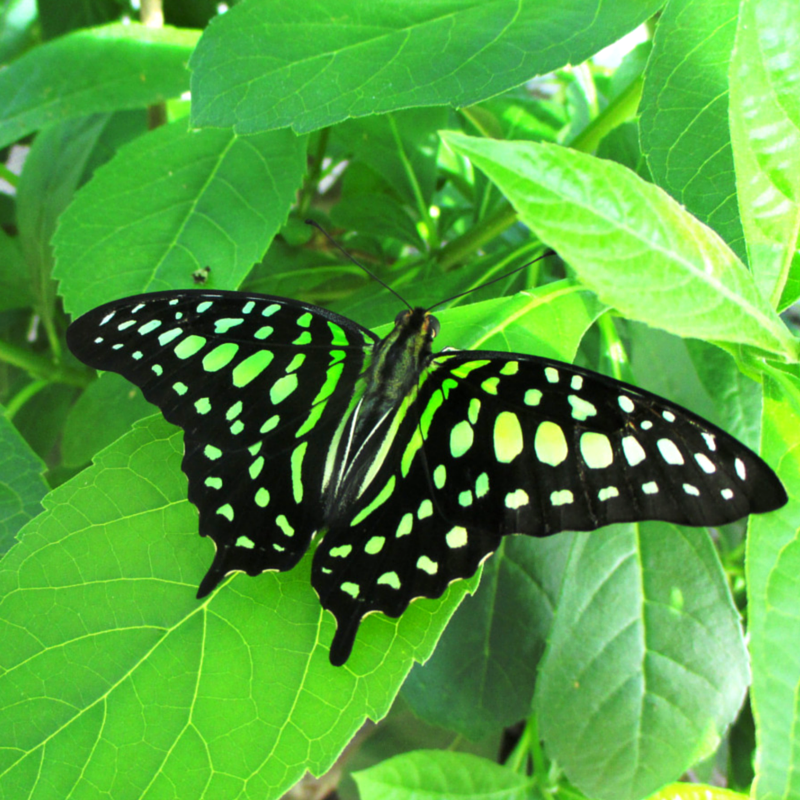 Another extraordinary example of camouflage is the photo below of the forest mort blue (Caligo eurilochus) and giant owl (Caligo memnon) resting on a weeping fig tree (Ficus benjamina ‘Indigo’). They are resting with their wings closed to expose a more dull underside but there is something else there that is particularly interesting. Eye spots! Several species of butterflies have these eye spots on their hindwings so that predators will attack the tips of their wings rather than their body. This allows the butterflies to escape their predator’s grip. However, something else even more peculiar is happening here with these two Caligos. If you take a moment to study the markings of the giant owl, you can see that the pattern does indeed mimic an owl’s face. This will also scare off predators who fall prey to owls! 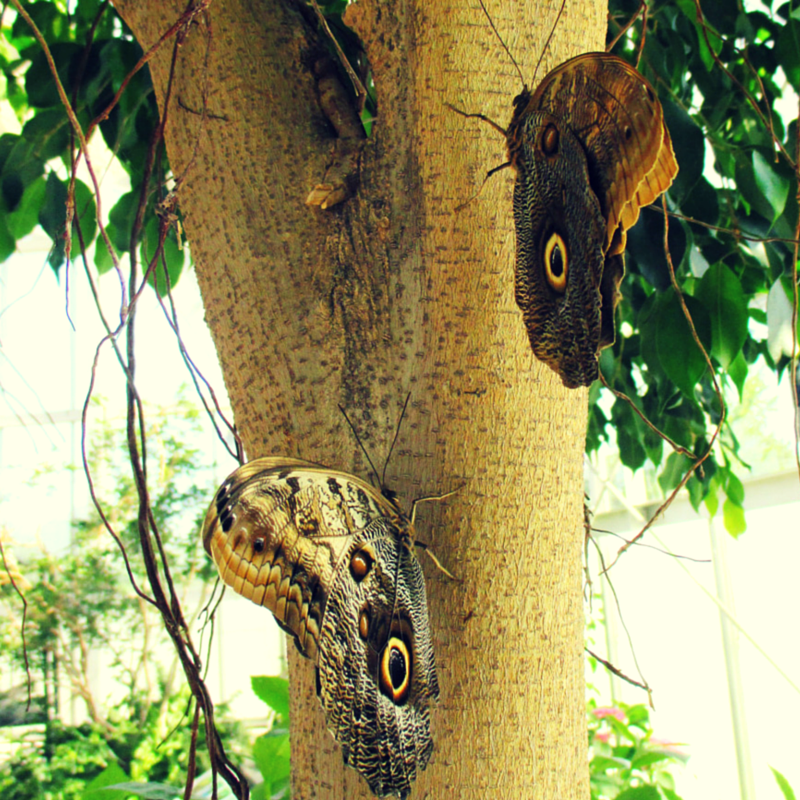 As impressive as the Caligo eurilochus and Caligo memnon are, the atlas moth (Atticus atlas) takes the cake for having an outstanding mimicking technique. Moths are still part of the Lepidoptera family and the atlas moth  is the largest moth in the world. Their wingspan can reach up to 12 inches across! Since they are so large, they can be easily spotted by predators. If you examine the tips of the wings in the image below you will see that they actually mimic a cobra’s head. This mimicking technique is key to their survival during their short lifetime of only one to two weeks. 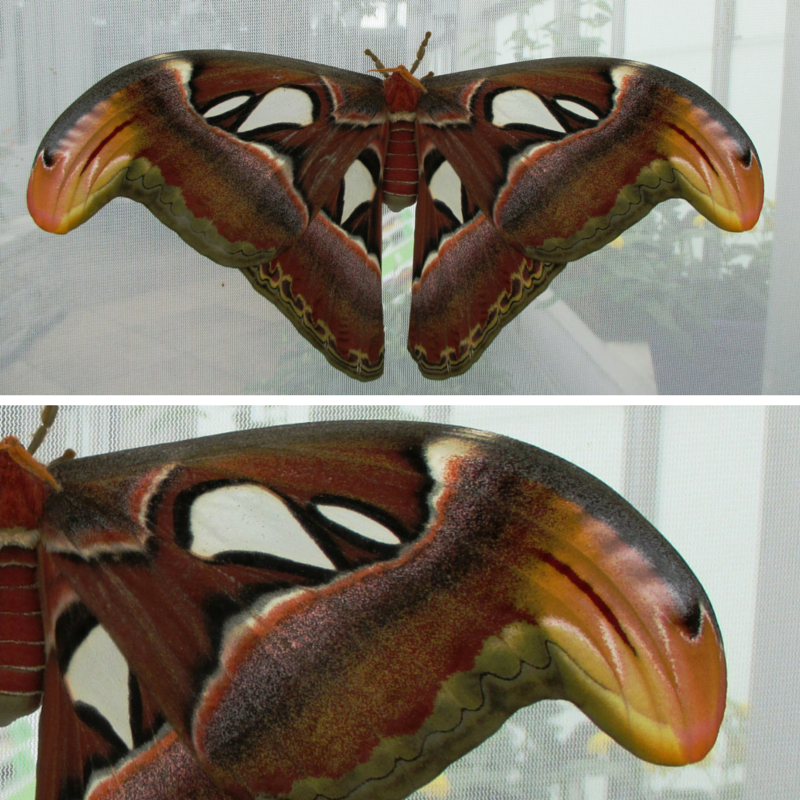 These are only a few disguise techniques that Lepidoptera use to hide from predators. Each butterfly species has some unique adaption to help it survive in this world. So next time you visit Butterflies LIVE!, the Children’s Garden monarch waystation, or see a beautiful butterfly in nature, take a moment to make those small observations that help these fragile and fascinating creatures survive.

Hilaire Ashworth is an Assistant Butterfly Curator in the Butterflies LIVE! exhibit. Here are a few more facts about her: Q: If you were a butterfly, which one would you be? A: Bat Wing (Atrophaneura semperi)! I love the vibrant red against the black and white wings. Q: What do you do in your spare time? A: I spend most of my spare time with my adopted street cat and organic gardening. However, I love rock climbing, hiking, and spending as much time outdoors as I possibly can.