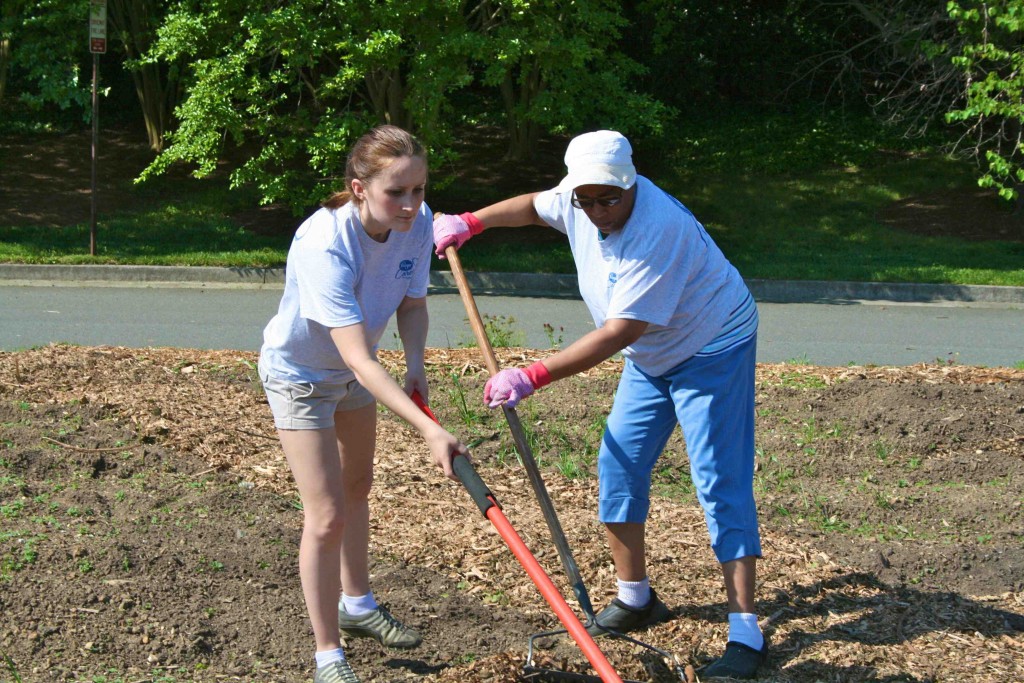 Is it Okay to Mulch in Winter?

You may think the end of January is a strange time for a blog post on the topic of mulch, but we had a question on Facebook:  “Any thoughts on the wisdom (or lack there of) of putting down mulch at this time of year?” and that got me thinking: why do we mulch, and when is the best time to put it down?

I talked with Elizabeth Fogel,  horticulturist, here at Lewis Ginter Botanical Garden, and she says there’s nothing wrong with putting mulch down at this time of year.  One of the main reasons you’d mulch in fall or early winter would be to protect the plants from the cold, but more importantly from the alternating of freezing and thawing temperatures.  If plants or bulbs freeze and then thaw and then freeze and then thaw, not only can the roots get damaged, but also bulbs and the plants themselves can get heaved from the ground where they are further exposed to temperature extremes and can’t get the protection and moisture they need from the soil.

Ideally, one would put down their mulch a bit earlier, just after the first hard frost (the frost will put the shrubs and perennials into dormancy)  but if you haven’t had a chance until now, it’s not too late — especially if you are checking for plants that may have popped out of the ground and are able push them back into the earth (or add soil to cover them if the ground is frozen) as you go along with your mulch.

I had no idea there was so much to know about mulch! For example, Fogel uses one kind of mulch on the Garden’s annual beds — triple shredded pine bark mulch, that goes down in both spring and fall. She uses a different kind on perennial beds. The triple shredded pine bark is very fine, because it is mechanically shredded three times. So it breaks down very quickly into soil, and 6 months later, it is fairly well composted.  This is good, because you don’t want to layer mulch upon more mulch.

The perennial beds, on the other hand, only get mulch once a year — in spring.  For the perennials, the Garden uses a hardwood mulch with larger pieces than the triple shredded pine, that doesn’t break down very fast — it lasts all year.  Some folks have mentioned removing the mulch from plants after a certain point. Fogel says that the primary reason you’d want to do that is if you either didn’t like the way the aging mulch looked and were planning to add fresh mulch before it decomposed.   Some folks even use evergreen boughs from their former Christmas tree on perennial beds — as the branches offer protection while still allowing plenty of air circulation for the plants that need it. It wouldn’t be as polished-looking as mulch, but I think that is a creative solution to the alternative of sticking your old Christmas tree in the trash can headed for the landfill  Or worse, letting it sit on your front curb because trash companies often refuse to take discarded Christmas trees.

I’m sure you’ve all seen those poor trees with a good 8 to 12 inches of mulch right up against the trunk. That is a big mistake, Fogel says, because it will encourage pests.  The mulch, stacked against the tree creates a great environment for rot, disease, insects and other creatures like voles and mice who may chew on the bark and girdle the tree.

“You don’t wan’t more than just a couple of inches,” Fogel says.

One other thing you want to watch for when using the hardwood mulch that slowly breaks down is that if you use a poor quality hardwood mulch, it sometimes has a tendency to clump so that rain water just runs over the mulch but won’t saturate it and reach the soil like you want it to. If this happens, she says you can solve the problem by breaking up the clumps on a regular basis.

In summer, mulch serves an entirely different purpose than in winter: it helps to keep in moisture in times of dry weather and watering restrictions, this can be critical to a plants survival.  The best time to put down mulch for the summer season, is actually in spring though Fogel says, because It’s much easier to lay mulch before the plant experiences spring growth and leafing. The plants are smaller, easier to work around and more accessible.  So you won’t have to work as hard to lay it down the mulch under the base of the plants & shrubs or avoid newly sprouted shoots.

If you have more questions about mulch or plantings feel free to ask us here or on our Facebook page. You might just inspire a blog post!