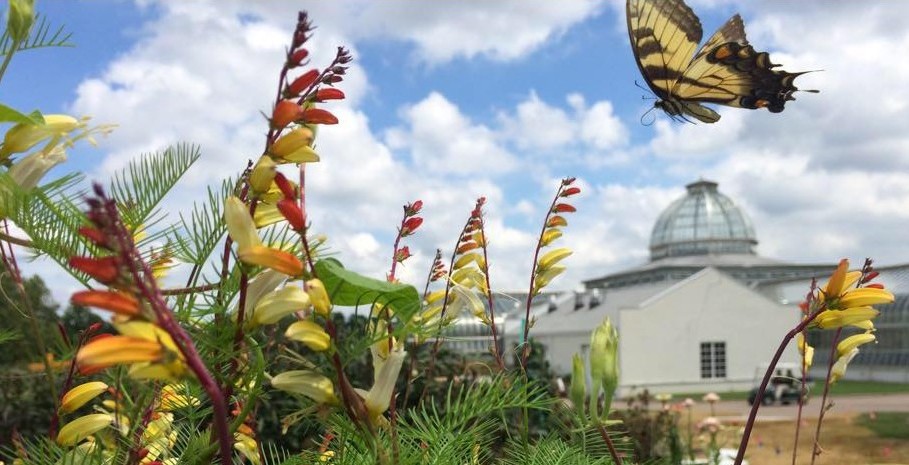 Sometimes, you just get lucky with the camera. That’s what happened earlier this week when we had our staff “huddle” (a weekly 15-minute stand-up staff meeting) next to the Community Kitchen Garden. My colleague Lucy Coggin and I were geeking out about the Spanish flag (Ipomoea lobata). I was giddy at what she was whispering to me just as the meeting started, pointing to some crazy beautiful bloom just beyond where we were standing.

“It used to be called Mina lobata,” Lucy said.  Until they changed the name.  I love plant taxonomy,  and the drama of changing botanical names, but now I’m getting distracted.  I was intrigued. I had to go see this Prince of plants, “formerly known as” Mina. What struck me most about her was that I’d never noticed her before. How could I NOT notice something so lovely?  I love how the blooms change from white, to yellow, to red and all stand on one side of the stem, like a flag. I love the fine, feathery foliage.

I was starting to feel like a plant groupie, just waiting for an autograph, when out of the corner of my eye: HUMMINGBIRDS! Everywhere. Ok, not everywhere, but there were at least three of them, and they were all drinking from the blooms of the plant “formerly known as” Mina. They were so greedy for their flower fix in fact that they didn’t seem to mind me standing there watching them. They flew from the shelter of a nearby magnolia to the Spanish flag and back again. And again. Then one perched on a nearby vine, and watched me. And watched some more, while I stood there wishing I had my good camera, instead of my iphone.  I figured I’d at least snap a few photos for our Instagram and Twitter feeds.

I realized I had found a hot new spot for wildlife at the Garden.  Yes, it’s off the beaten path, (it’s behind the Conservatory), but well worth the detour, and only about 50 meters from the Central Garden. Plus, if you visit it you’ll get to check out a sampling of the goods we are growing for the food bank and the blooms we are growing for dried flower decorations for this year’s Dominion GardenFest of Lights.  And, you’ll will be  surrounded by butterflies and hummingbirds.  Even if you forget your good camera, you might have a little luck and catch a good photo.

Oh, and if I can’t call the beauty the plant “formerly known as” Mina, that’s okay. The other common name? Exotic love vine. Like I said, she’s the Prince of plants!