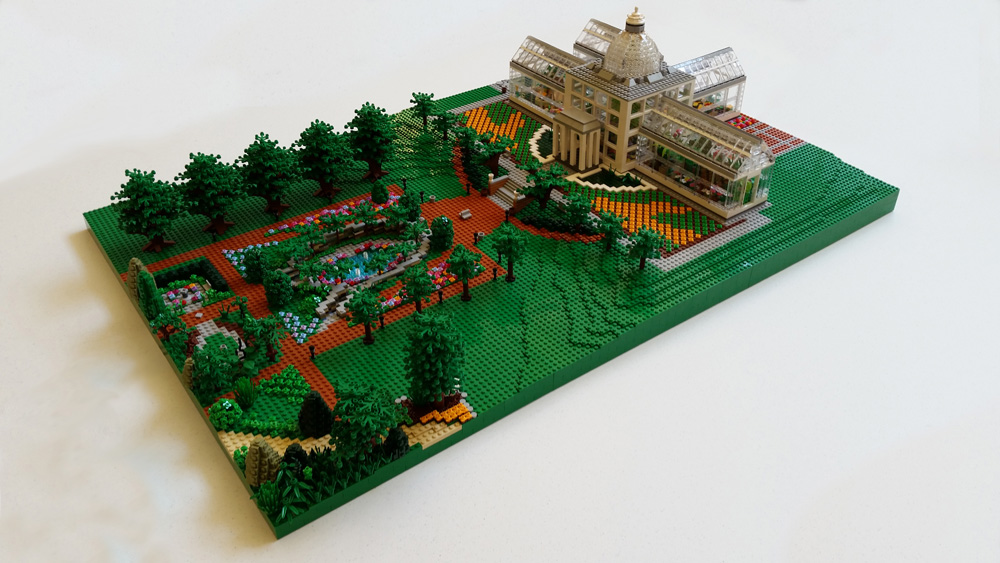 The Conservatory in LEGO bricks by the RVA Lego Users Group.

Editor’s Note: The Richmond LEGO User Group, RVA LUG, recently created a LEGO brick masterpiece. The 15,000-LEGO Central Garden and Conservatory, created entirely out of LEGO bricks, made its debut at our opening weekend of  Nature Connects®: Art with LEGO® Bricks.  Dennis R., co-founder of RVA LUG, wrote about the experience of building the structure, and opening weekend on the RVA LUG blog. Today we’re featuring  a modified version of that original post — photos and all — so you can see the genius behind the creation. Plus we have some great news, Dennis and RVA LUG have agreed to let us display their work of art in the Lora Robins Library (hours are 10 a.m. – 4 p.m. M-F, and 1 p.m. to 4 p.m. Sat. – Sun.) through September 16, 2016. Please note that it will not be on display Aug. 2 – Aug. 9, 2016. Take it away Dennis!

We had  a wonderful time at  opening weekend of Nature Connects: Art with Lego at Lewis Ginter Botanical Garden. We love seeing the LEGO User Group Train Show, meeting people, seeing Brian Korte’s art, and of course Sean Kenney’s exhibit. We’ve received many compliments on our display and appreciate it very much. Here are some photos and information on its creation.  After learning about the opportunity to build a display for the Lego LUG Train Show, the first thing we did was have a meeting on what we wanted to build. Being local, it was obvious a Lewis Ginter Botanical Garden design made the most sense. After some discussion, we decided on the Conservatory and Central Garden.  We had a general idea of what to do and started with an LLD (Lego Digital Designer, CAD for Lego) conceptual design by LEGO Ambassador and RVA LUG co-founder Brian Slevin: 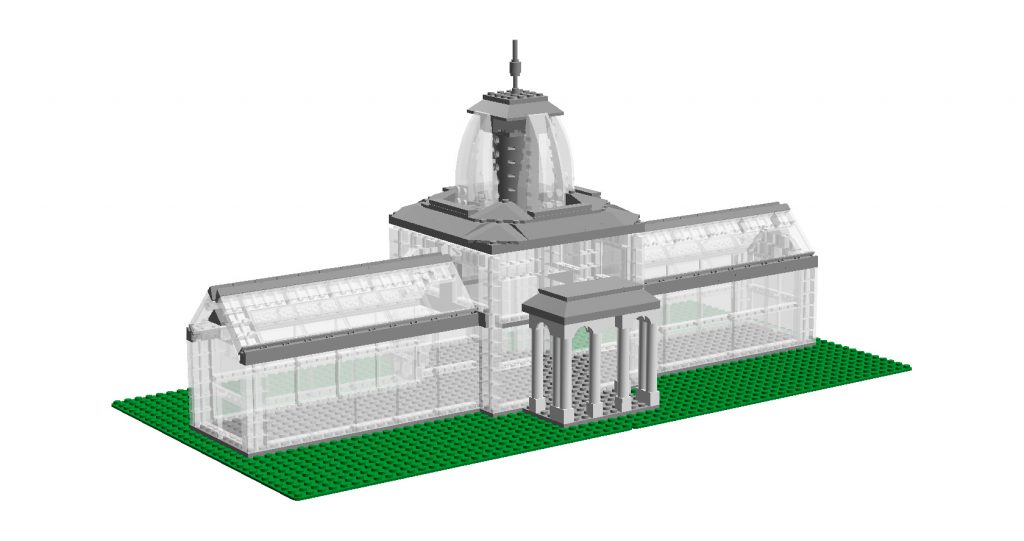 In the meantime, we needed figure out the overall layout. This started by using satellite images from Google Maps: 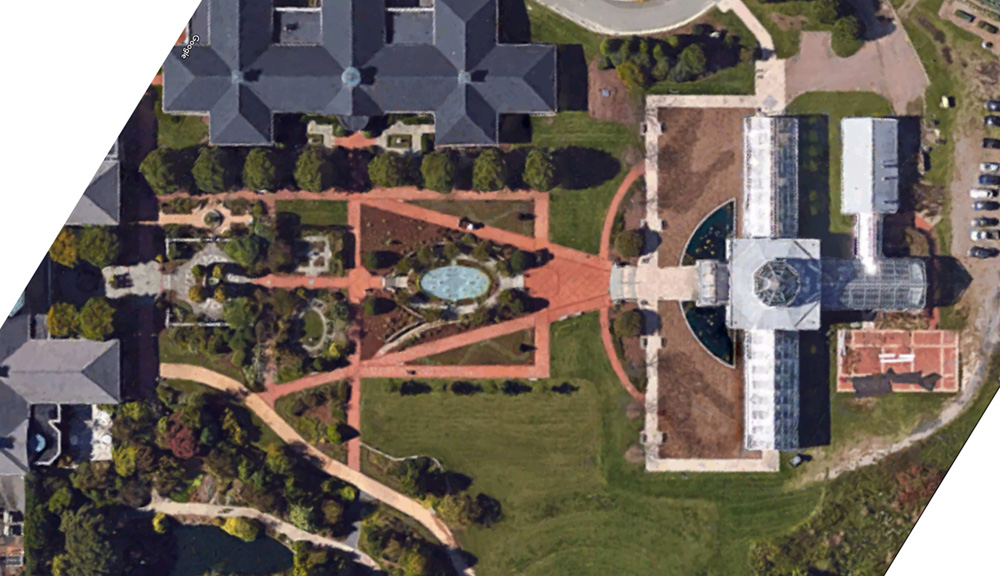 Aerial photo of the Conservatory 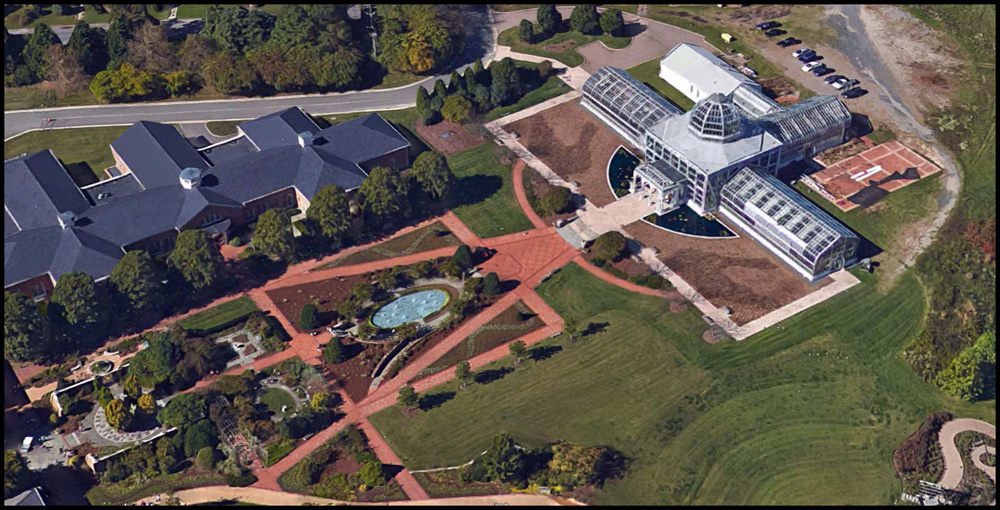 Another view of the Conservatory from the air.

With this rotated and straightened image, I used AutoCAD to create a few layouts. I drew a top view of a one-by-one Lego brick to scale, then copied it 48 times in two directions for the size of a large LEGO  baseplate. That was then copied in a two-by-three pattern, for a total of six large baseplates. That may not sound like much. But that’s 96 by 144 studs, or 13,824 total, which is equal to two-and-a-half wide by five foot long. From there I moved and resized the satellite image until I got it to align well. The idea was to set it up so that the sidewalks and all sections of the building resulted in nice, easy-to-work-with numbers of studs. After a few versions, this is the final result: 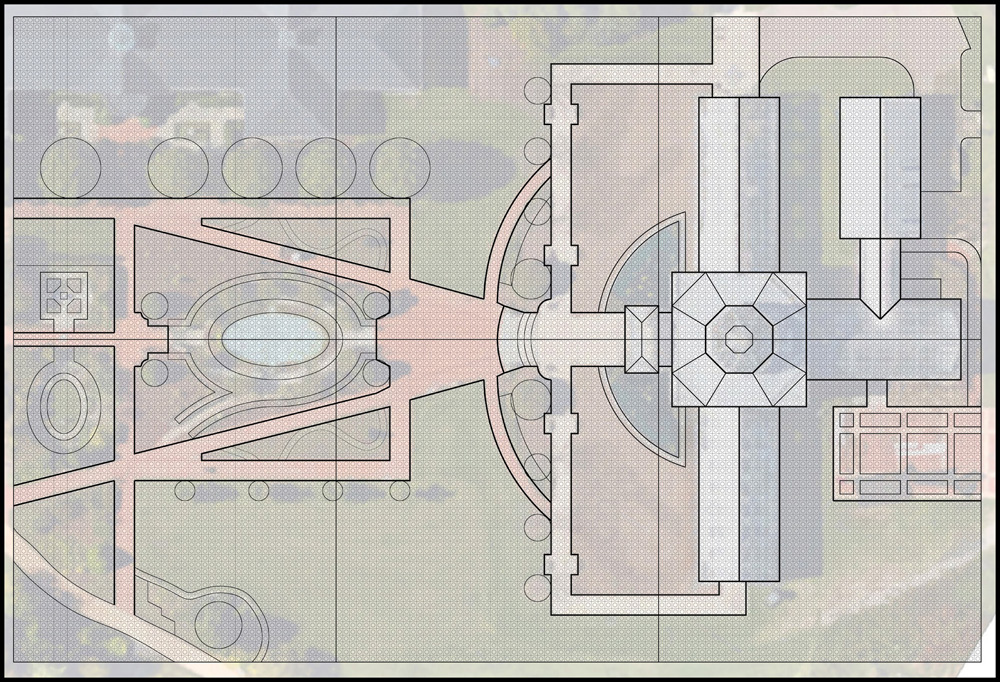 AutoCAD layouts of the Central Garden and Conservatory.

Since there were a number of steps to consider, I also created a preliminary topography map: 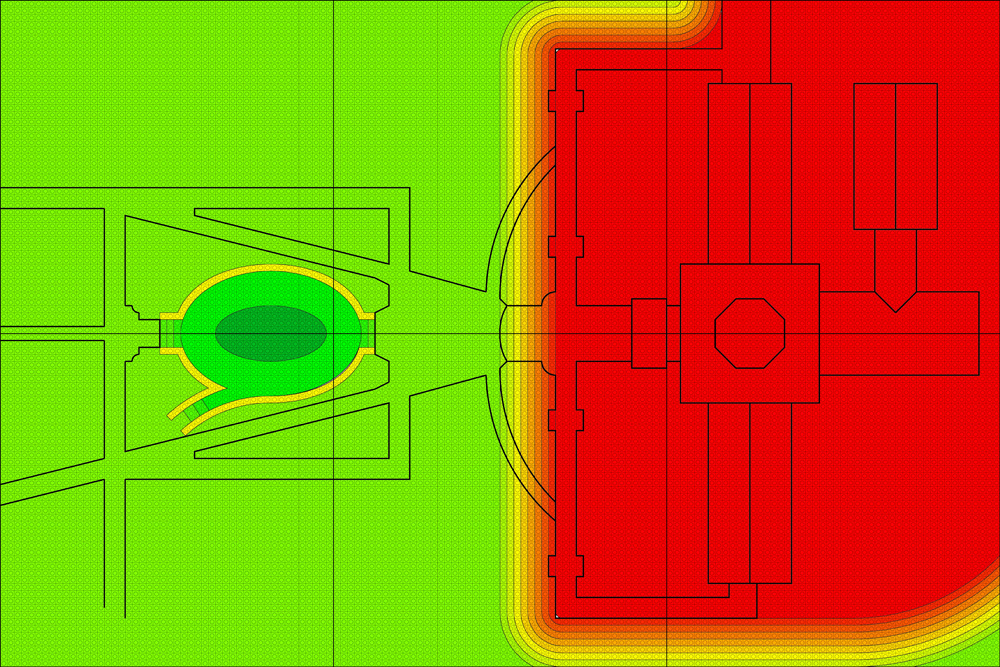 Green shows the lowest elevation and red the highest, with each color change between representing one Lego plate (1/3 of a brick). After a site visit, I saw the slope down from the Conservatory area was accurate as presented here near the steps, but more gradual as it moves away. This made for a challenging design, especially with the curved sidewalks coming up on each side.

Using the information gathered so far, I started looking at how many bricks it would take to create the base. The elevation changes were pretty dramatic, with a difference of over four bricks from top to bottom. That adds up very quickly. Fortunately, we had recently received 6,000 green two-by-four bricks from TLG, along with quite a few Technic pieces we needed to connect all the baseplates together. How convenient!

I had a large number of green bricks and plates of various sizes myself, as well as light gray for the sidewalks. The only concern was that we really wanted to use dark orange for the masonry brick sidewalks for the most realistic appearance possible with Lego. But this is a relatively rare color. After a little research, I found Town Hall (set number 10224) had a considerable number of those by itself, which I happened to own. I broke it down, collecting all the dark orange pieces, and gathered every other brick I had in that color from the rest of my Lego collection. It turned out to be just enough, with a few to spare. I also grabbed white bricks for the building outline, dark gray for the road, brown for the garden, and some tan for a short section of a different type of sidewalk.

With everything sorted in bins and the design already laid out, putting the base together went very quickly. Within a week it was done: 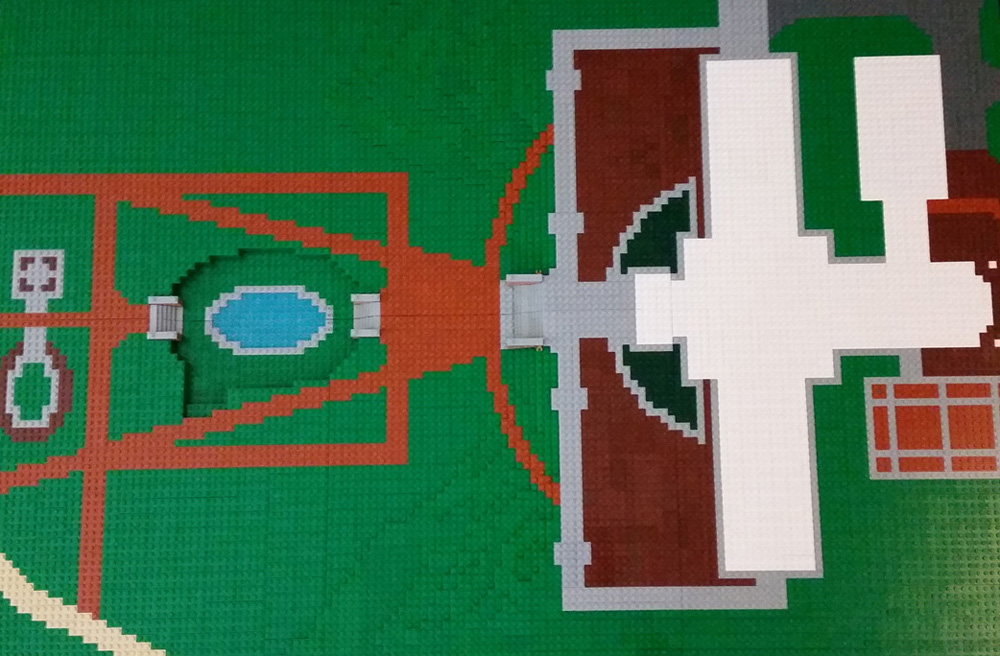 I don’t have a lot of space at my house and really wanted my living room back, so I moved the base to Brian’s place for the remainder of the project. In the meantime, hundreds of pictures were taken at Lewis Ginter to use as reference. The satellite images were only good for the overall layout, due to being taken in the winter when so much of the plant life wasn’t there to be seen.

Using all this, we had all we needed to figure out how the build up on the base. Brian reconfigured the Conservatory in LDD and came up with a clever method to model the dome, which was quite tricky to do, being both octagonal and curved. More than a couple dozen Bricklink orders were placed for all the pieces, from sellers all across the US, from early on until just a couple days prior to the show. Brian and Steve completed the Conservator, with its interior details, and I did the garden. We worked on it until the last minute, literally. Nobody had seen the entire build all at once until the day of setup at Lewis Ginter. Here is an image early in the morning: 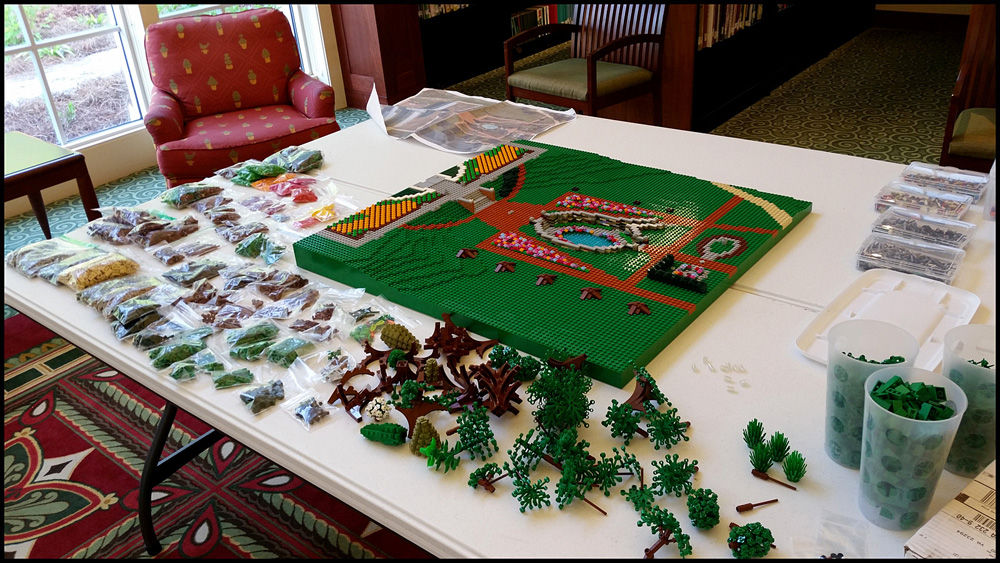 Some of the trees were built previously and removed for transport. But quite a few details were nothing more than loose bricks in their original plastic bags. I started first thing in the morning and was done early in the afternoon. We couldn’t be happier with the result. 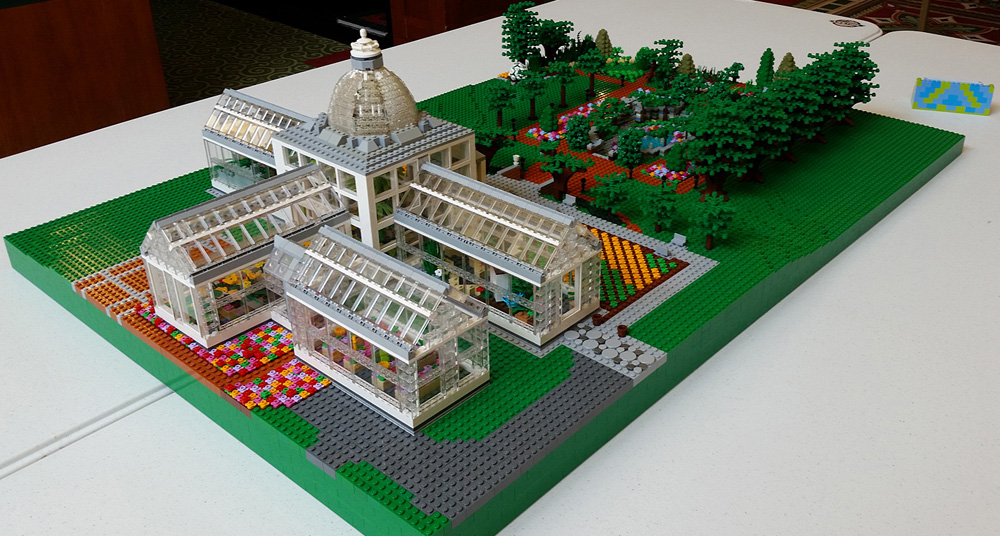 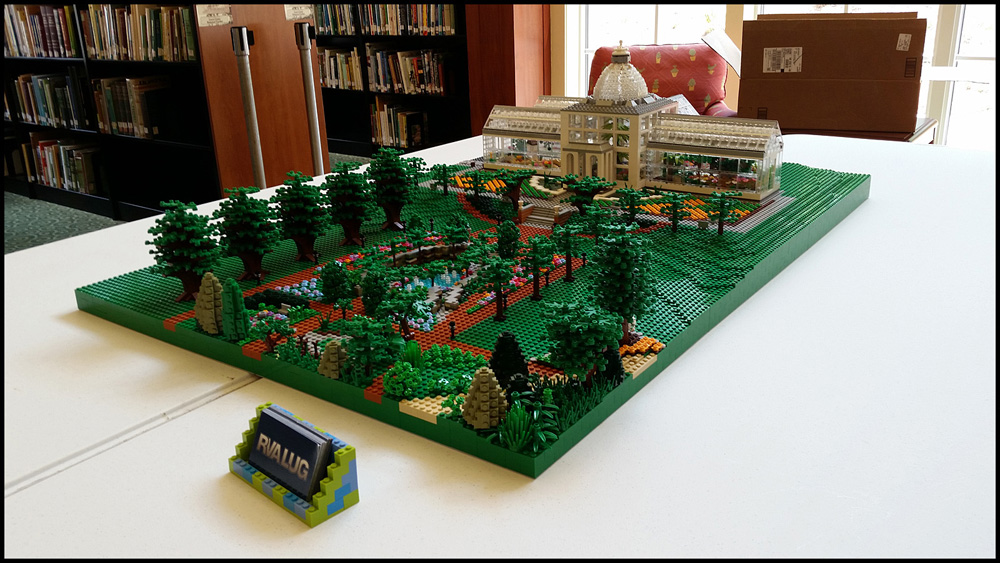 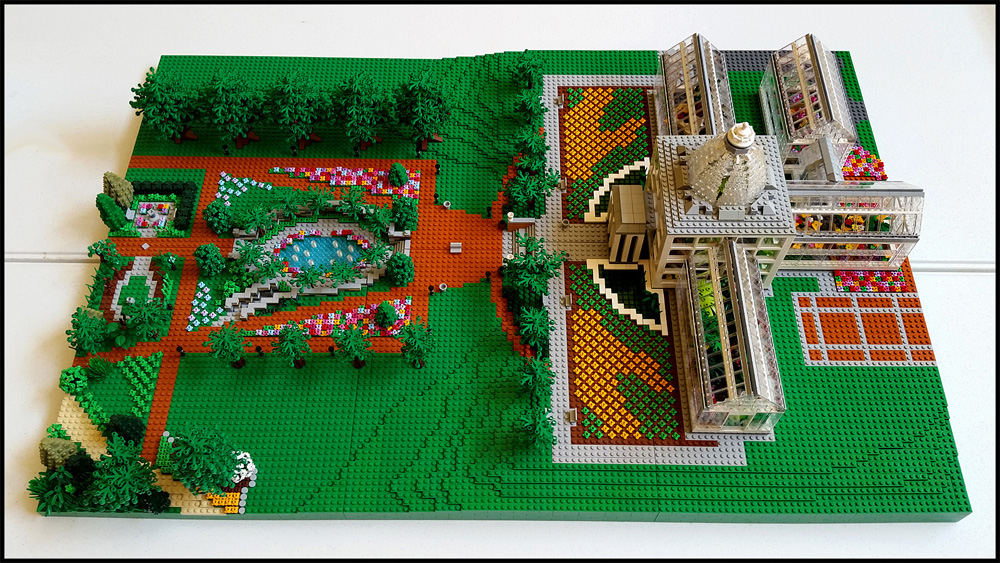 The total dimensions are 2-and-a-half-feet wide by 5 feet long. The estimated number of pieces is around 15,000. There are over 650 LEGO leaves and at least 1,000 flowers. There are 25 different LEGO colors in more number of types than one can reasonably estimate. The original thought to build something for the show was about two months ago, with about three weeks of planning and five weeks of building. The total number of hours is difficult to estimate, but it was a lot.

Dennis R is an AFOL (adult fan of Lego) who helped start RVA LUG. Professionally, he sits behind a computer all day and draws. It's a pretty good job. He works for a structural engineering firm designing schools, bridges, and theme park structures. In his free time he likes to race cars, cook, travel, create websites, build computers, and take too many pictures.

See the LEGO Movie Outside in the Garden

Using the summer garden as inspiration, campers will design and build their own nature-themed mosaics throughout the week, including one group piece to be displayed at the Garden!

Visit for Free on this day only!