One of our wonderful volunteers, Linda Miller, was talking about the dawn redwoods planted on Monument Avenue in the median strip near her home.  She had enjoyed watching the young trees grow and develop their graceful feathery foliage. But towards late October the leaves began to turn a rusty brown and then began to fall off the tree. Maybe you noticed this phenomenon too?   Linda was distraught to think that the beautiful new “evergreens”  were about to die.  But, after asking a few questions here at the Garden, she learned that the dawn redwoods were just behaving normally. Though they look like many other needled evergreens (such as pines and firs) each fall, the leaves actually turn a copper color and the branches lose all their leaves. 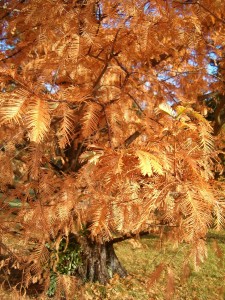 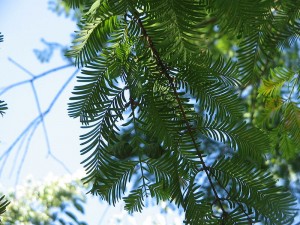 And this is a fascinating ree for more reasons than this.   Until 1946 the Dawn Redwood or Metasequoia glyptostroboides were thought to be extinct.  Only when Chinese government officials fled west from the Japanese invasion and entered a remote valley in Szechuan Province did they encounter a “new” tree.  Botanists verified that this was a relic strand from a species growing at the time of the dinosaurs. They collected seeds from a few trees and shared them with botanical gardens in the U.S. just as China’s Communist Party took power. Today more trees have been found in China and seedlings are available from many trees.  They make good street trees and as we’ve mentioned, they’ve been planted on Monument Avenue in the center median.  So, the next time you are driving down Monument Avenue in the Fall and you see that they’ve turned a copper color and are dropping their needles remember,  this is natural. The tree is not dying.  They do this every year.  Maybe even pass the word around to your neighbors, I bet they will be intrigued by the story.

Here at Lewis Ginter Botanical Garden, we have two small groves of these distinctive trees on either side of the entrance to the Robins Visitor Center.  Take note of them next time you visit the Garden, now that you can share their story with others. And, if you’d like to learn more about dawn redwoods and the other wonderful trees we have here at Lewis Ginter, will be featuring a new tree tour: Our World of Trees to be offered by pre-registration beginning in October 2010. We also, offer other tours for groups of 15-20 people (and more) including The Heart of the Garden, an Introduction, Visit an Alluring Landscape Rich in Roses, Asian Valley Exploration, Plant Personalities of Richmond Gardens, as well as Glass Magic in the Garden, and an early bird GardenFest Tour available starting in late November.