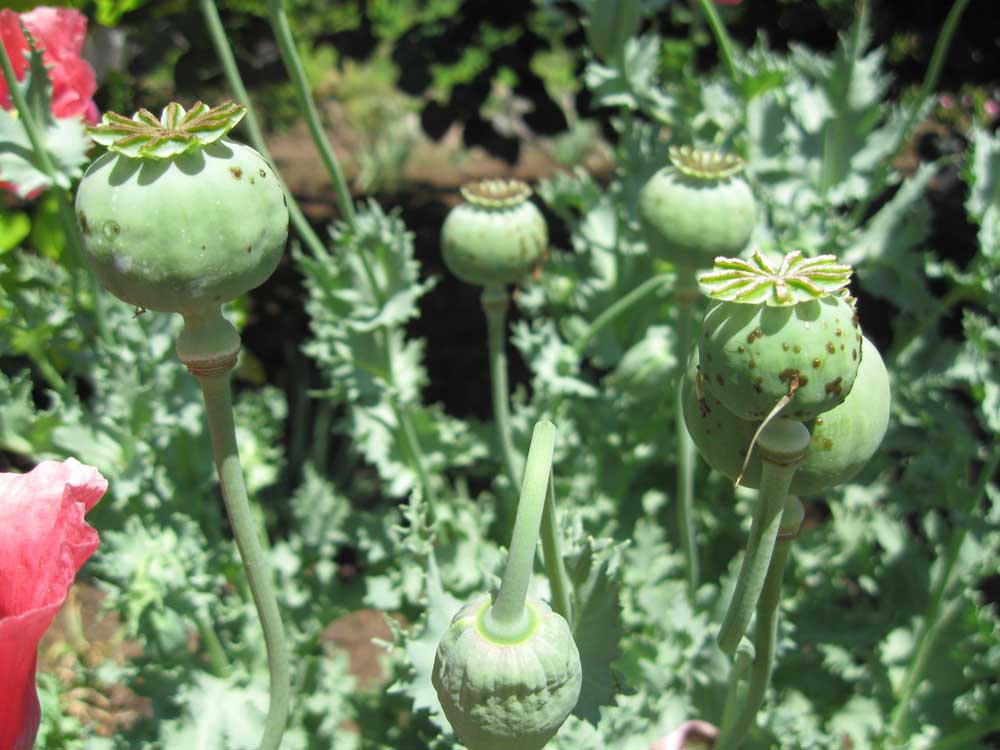 Ok. I’m a nerd. A science fiction nerd. Plants, trees and vegetation have figured prominently in science fiction literature and movies for decades. As an avid garden nerd as well, I delight in striking and unusual plants. Take for instance, the pods from “The Body Snatchers,” the red weed from “War of the Worlds“, and the Ents from “Lord of the Rings.” Who could forget the Pod Plants shooting Omicron spores into the faces of Kirk and his crew on “Star Trek“; or the whomping willow and mandrakes from “Harry Potter“; or even Audrey II in “Little Shop of Horrors”? 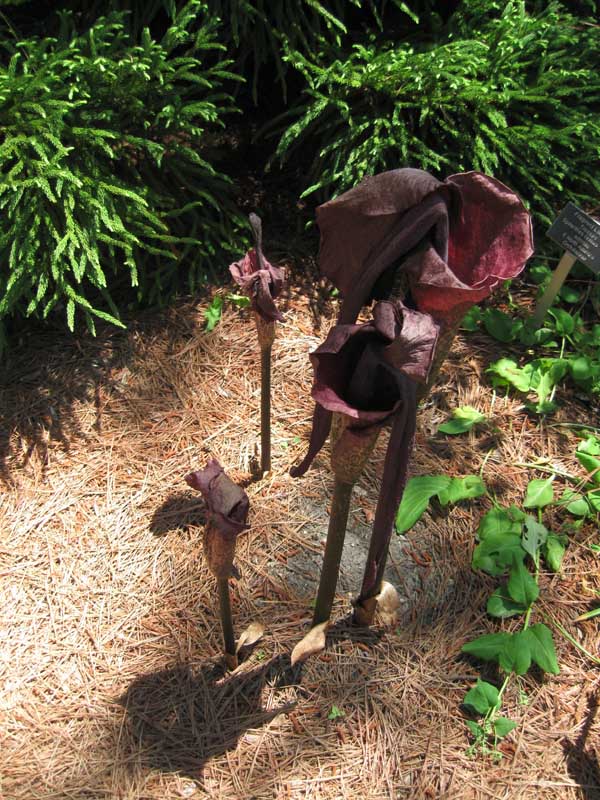 The leathery, crimson flower of the bizarre dragon plant (Dracunulus vulgaris) not only looks odd, but emits a putrid odor.

So if you’re as big of a science fiction fan as I am, you must begin a sci-fi Garden, a Garden of Unearthly Delights! Some of the plants at Lewis Ginter Botanical Garden are great references for a good start. In walking through the Garden you can predict that you’ll see the lovely and sublime, but be prepared to see the weird, as well. Perhaps the most bizarre plant that I’ve seen here is the dragon plant (Dracunulus vulgaris). You smell it long before you see it, as I found out — it smells like garbage! But the smell isn’t the only oddity about this plant — its dark crimson, leathery spike of a flower is very unusual. A perfect candidate, and even star of the show for a sci-fi garden. It has finished blooming for this year, but mark your calendars and visit early next summer to catch it in all its splendor.

On to the West Island Garden where you’ll find the bog garden with pitcher plants (Saracennia). I don’t know which I think are more alien looking — the flower or the pitcher? And they’re carnivorous! What more could you want for an alien garden? In Flagler Garden you’ll find  rough horsetail (Equisetum hyemale) a sedge whose segmented rush-like stalks look like they’re from another time (and they are), but can certainly pass for far off into the future too. 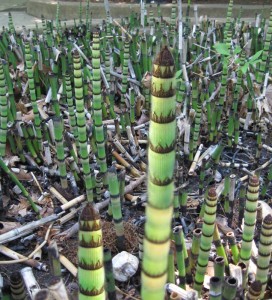 Horsetail, though considered a living fossil, would make a great addition to a sci-fi garden.

The blossom, bud and seed pod of the columbine all make great alien plantings.

You may not think of the unassuming columbine for an alien garden, but take a second look. Bud, blossom and seed pod are all good “alien plants,” with their drooping bell-shaped flower and distinctive spurs.

Along the south edge of the Rose Garden the oriental poppies (Papaver orientale) are in bloom. Now poppies may have you thinking more along the lines of “The Wizard of Oz,” but look at the poppy seed pods. The blooms are quickly spent, but then you have these lovely, yet other-worldly seed pods, some erect, others bent over heads bowed, that only get more majestic with age.

Let’s not skip the Conservatory which houses a plethora of orchids, some of the most alien being the slippers. The man-eating plant from “Little Shop of Horrors,” The Audrey II most certainly had her dewlap modeled after the veined labellum of the Paphiopedilum sukhakulii, a good plant for an indoor sci-fi fan. 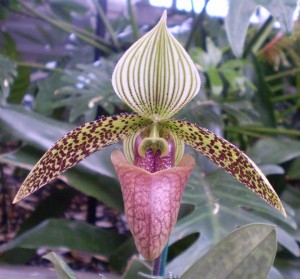 This slipper orchid, Paphiopedilum sukhakulii looks as if to say, “Feed me!” like Audrey II from Little Shop of Horrors.

The list of additions to a Garden of Unearthly Delights could go on and on. What plants would you incorporate in your sci-fi garden?