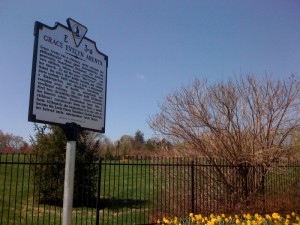 The newly installed Grace Arents Historical Market at the entrance to Lewis Ginter Botanical GardenAbout a year and a half ago — I was interviewed for a job here at the Garden to help promote the Garden’s 25th Anniversary in 2009.  On that day, I met two amazing women — Beth Monroe, the Garden’s Director of Public Relations,  who has been at the Garden for over 12 years, and Adele MacLean, Program Developer/Special Projects, whose job it was to plan and coordinate many of the 25th Anniversary events.  Thankfully, I got the job, and had the honor of getting to know these women as we collaborated on numerous projects including the Butterflies LIVE! exhibit,  four educational symposia, A Blooming Anniversary Weekend celebration, and a 4th of July celebration like no other  — Butterflies are Free (which included free admission to the Garden).

There was one project, though, that Adele worked tirelessly on, mostly by herself — a historical marker in honor of Lewis Ginter Botanical Garden’s benefactor,  Grace Evelyn Arents.  Last week, Adele’s work came to fruition with the installation of a silver plaque near the Garden’s entrance. Grace Arents was a “visionary social reformer and philanthropist, whose quiet determination and generosity transformed Richmond,”  it reads. “Her passions were children, nature, books, architecture and her church. To aid the poor, “Miss Grace” established the city’s first 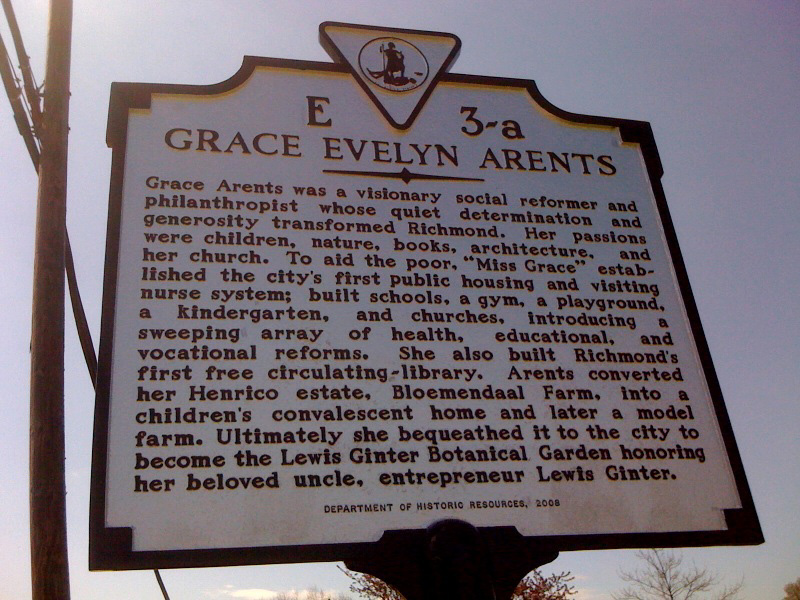 public housing and visiting nurse system; built schools, a gym, a playground, a kindergarten, and churches, introducing a sweeping array of health, educational, and vocational reforms. She also built Richmond’s first free circulation library. Arents converted her Henrico estate, Bloemendaal Farm, into a children’s convalescent home and later into a model farm. Ultimately she bequeathed it to the city to become the Lewis Ginter Botanical Garden honoring her beloved uncle, entrepreneur Lewis Ginter.”

The installation of this plaque seemed like a fitting close to the year and a half that Adele has spent at the Garden. A well-worded legacy that remembers and recognizes one of Richmond’s most profound contributors to Richmond’s social reform is a proud accomplishment.  As we said goodbye to Adele, on 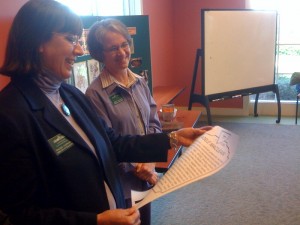 her last day,  Randee Humphrey, Director of Education, presented her with our own token of appreciation — a mock historic landmark.

Meanwhile, Grace Arent’s legacy continues …on Facebook, at least, with fascinating posts about settlements owed to black farmers by the USDA and Globish: The World Dialect of the Third Millennium, Crop Mobs and Renegade Farmers Markets all in the same day.  I think Grace Arents would be proud.