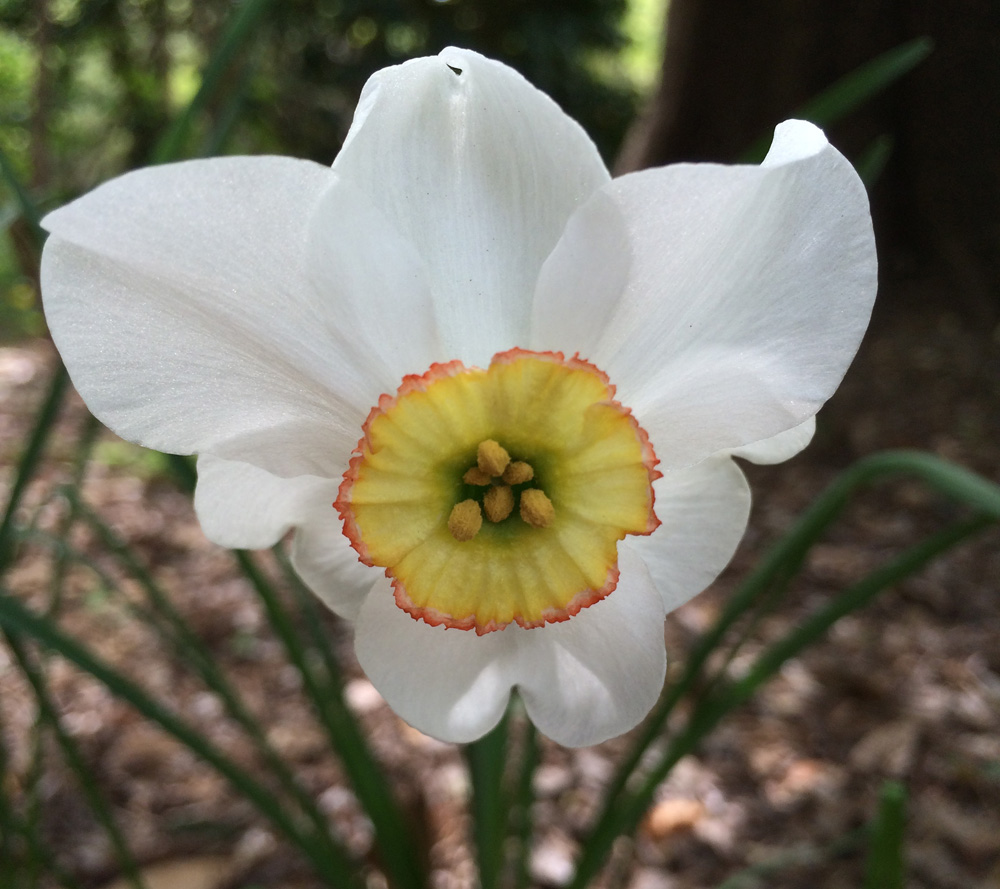 Just when I thought all the daffodils had already bloomed, I was surprised to see some jolly miniature daffodils rising delicately, along a Flagler Garden pathway, not far from historic Bloemendaal House. With white petals and dainty cups a striking blend of lime green, golden yellow, crimson red and tangerine orange, these beauties are Poeticus daffodils, the late bloomers that finish off the flowering season of Narcissus. Growing one flower to a stem, these “Poets” exuded a sweet, zesty scent that awakened my senses as I stepped closer for a quick sniff.

Modern Poeticus daffodils arose from breeding species Narcissus poeticus, which was one of the first daffodils to be cultivated and believed to be the narcissus of ancient times mentioned in Greek mythology.  While some daffodils are native to North America, N. poeticus is not. This species used to grow extensively in meadows and fields across central and southern Europe. Because of its abundance, legend has it that these daffodils inspired several poets and therefore got its name. The most well-known daffodil-inspired poem is probably William Wordsworth’s  “I Wandered as Lonely as a Cloud”.

Of the 284 daffodil cultivars at our Garden, 38 are from the poeticus division. They have a great story behind them that I would love to tell you today. This is a story about the late Margaret (Meg) Roberts Yerger and Nancy Roberts Pope, the two women behind our collection of poets.

“Meg was a tall, slender, elegant lady with brilliant blue eyes,” said Jack Holland, a long-time friend of Yerger and former president of Somerset County Garden Club in Maryland, of which she was a founder. “She was enthusiastic about daffodils and sharing them with others,” he recalled. Yerger was especially fond of Poet’s daffodils (amazingly, she had hybridized and registered a total of 106 cultivars herself). Her love for poet daffodils spread not only to members of her garden club, but also to her Richmond niece, the late Nancy Roberts Pope, from a very early age.

Roberts was a student in Lewis Ginter Botanical Garden’s garden design program, who unfortunately died in 1995. During her last years, she found great joy in the beauty of the Garden. Her parents, John and Jane Roberts, established a memorial fund in her memory, the Nancy Roberts Pope Collection. The fund has helped us expand our collection of Poets over the years.  In 2007 we were given of six Yerger’s hybrids including: ‘Pride of Baltimore,’ ‘Meggy,’ ‘Glitz,’ ‘Sweet Hope,’ ‘Yerger Hybrid 1’, and ‘Yerger Hybrid 2’.

At the sight of the dazzling Poet’s daffodils fluttering in the breeze, I often think about Nancy Roberts Pope and Meg Yerger. The fiery rims on the Poet’s daffodils remind me of the passion they passed from one to another, to people around them, and to me a stranger who has never met them. I fancy the idea of me interning at Lewis Ginter Botanical Garden as similar to working at a museum of living things, where every flower seems to have a story — a history behind them — waiting to be discovered and told, just like with these Poet’s daffodils. 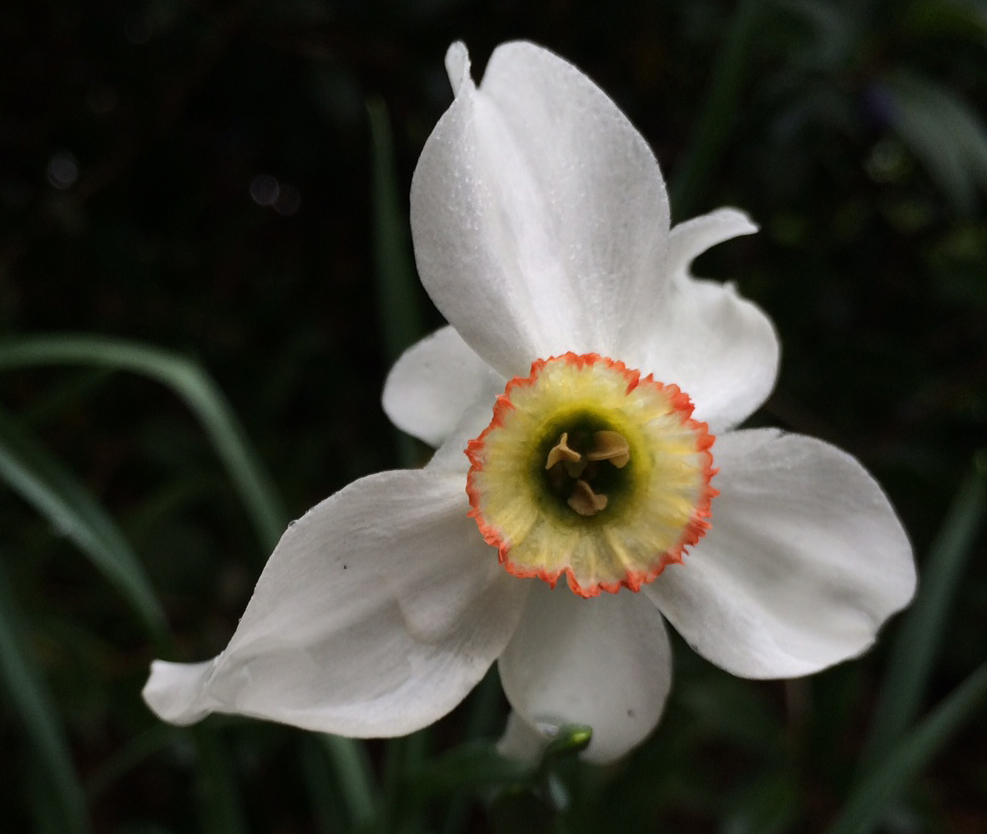 You may still find a few late poeticus narcissus blooming, even this week. They are the last daffodils to bloom.

Why Do Collections Matter?

Did you know that botanical gardens are actually museums? The big difference is that instead of having collections of artwork or historical objects, we have living collections. All of our plants are documented, numbered, and tracked, just like other museum collections.

Visit us to learn about the history of gardening, famous landscape designers, plant selection and care, botanical art and our Garden’s history.

You can help the Garden fulfill its mission by donating to our Annual Fund.