Rainwater under the Microscope 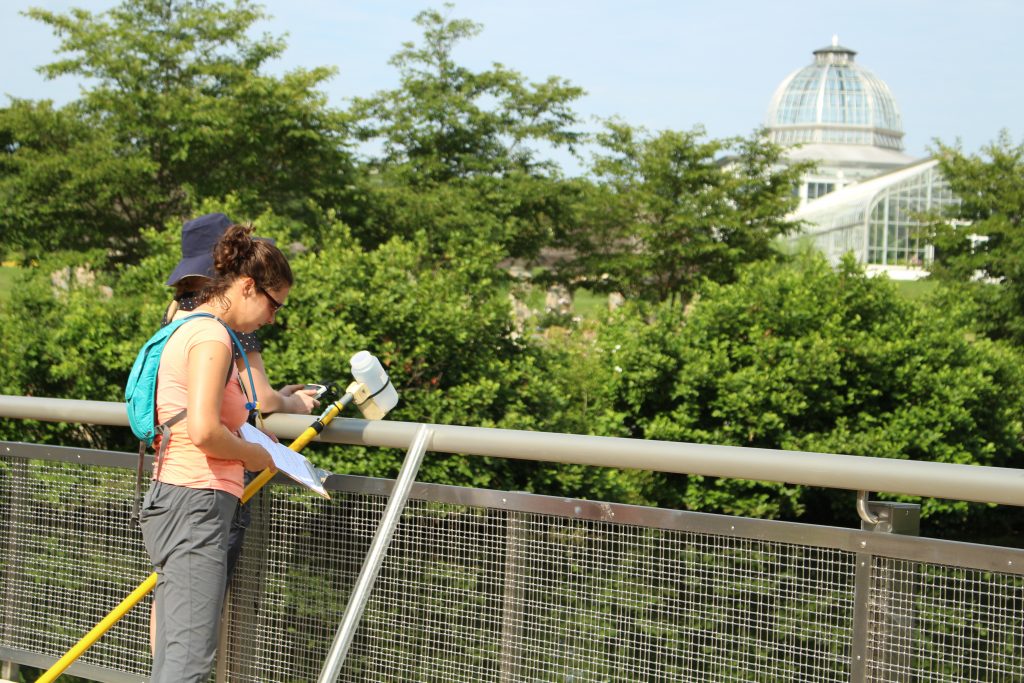 Laura Schumm (front), Community Kitchen Garden horticulturist, is currently in charge of the rainwater testing project. She and Sarah McClanahan (back), horticulture research intern, conduct water testing across eight sites at the Garden every two weeks (except during winter time, when they only do it once every month). In the photo, McClanahan uses a Thermo Scientific Orion 4Star Meter to measure temperature, pH, and dissolved oxygen in Sydnor Lake, while Schumm documents the data.

If these facts are jawdroppers to you, then you are not alone. Many may not be familiar with the Garden’s irrigation practice and rainwater harvesting system, as it is one of those behind-the-scenes elements, necessary to the Garden’s operation, yet too inconspicuous to be a topic of interest. It’s unlikely that you are prompted to think about the water that runs deep in the ground and channels around the Garden when you are utterly charmed by the radiant blooms above it. I was just like you, until I learned about our water conservation and water testing projects. I am quite fascinated with my findings.

To help you understand the specific context, here is some background information. We have been collecting rainwater for the past 16 years using our own water harvesting system. We use the captured rainwater in Sydnor Lake and the irrigation lake  to water all of our gardens except for the Conservatory and the Massey Greenhouse. (There we use County Water filtered through reverse osmosis to remove particles that could clog our misting system.) Whatever water isn’t captured runs off into Lakeside Lake and Thorpe Branch adjacent to the Garden’s property, and is eventually channeled back into our irrigation lakes by pumps. If you take a stroll along Wild Side Walk, you will see a little creek running between our Garden and Jefferson Lakeside Country Club where the excess rainwater goes. Below is a map showing our rainwater collection system. 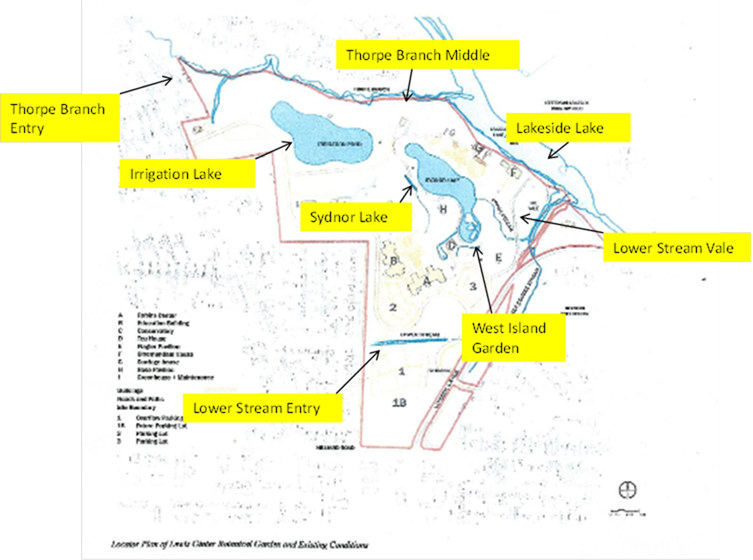 This map shows the eight sites that we choose to test our rainwater quality. These sites are spread throughout the Garden’s properties to ensure that the final results provide us with accurate information on our system-wide water quality.

Water conservation plays a crucial role in our sustainable agriculture practice and we’re really proud of this rainwater harvesting system. However, when it comes to recycling rainwater, water quality and safety are the two most important issues to consider. “Relying so heavily on rainwater, it is essential for us to know what is in our water, and if there are any pollutants that would cause harm to plant collections or to our 65 employees, 620 volunteers, or 330,000 annual visitors,” said Director of Horticulture Grace Chapman Elton.

In 2013, we pursued and received the Citizen Water Monitoring Grant from the Virginia Department of Environmental Quality (DEQ) to conduct water testing on our rainwater collection system. Thanks to the grant, we are able to keep records of our water quality and use the results to modify current horticultural practices. We also contribute the data to the DEQ’s online water quality monitoring database, a bigger data set geared towards determining the status of water in the state of Virginia. This is an important collaborative partnership between the Garden and the DEQ, as we value the water quality at our Garden just as much as the health of the Chesapeake Bay and other waterways in Virginia, and of course they are connected.

The water testing project was started in 2014 by Karin Stretchko, then Conservatory Horticulturist, as part of her  Master’s thesis at Virginia Tech. While Stretchko is now working as an Agriculture Specialist at J. Sargeant Reynolds Community College, she is still quite involved with the project as a volunteer, stopping by every few months and helping the water testing team analyze the collected data and upload them to the DEQ’s database.

Currently, Laura Schumm, Community Kitchen Garden Horticulturist, is the person in charge of this project. On July 7, I was lucky to be able to shadow Schumm and Sara McClanahan, horticulture research intern, as they conducted their bi-weekly water testing. Reading about the project is one thing, but getting to see it being done is definitely a better way to learn about the whole procedure. Let me tell you about my adventure. 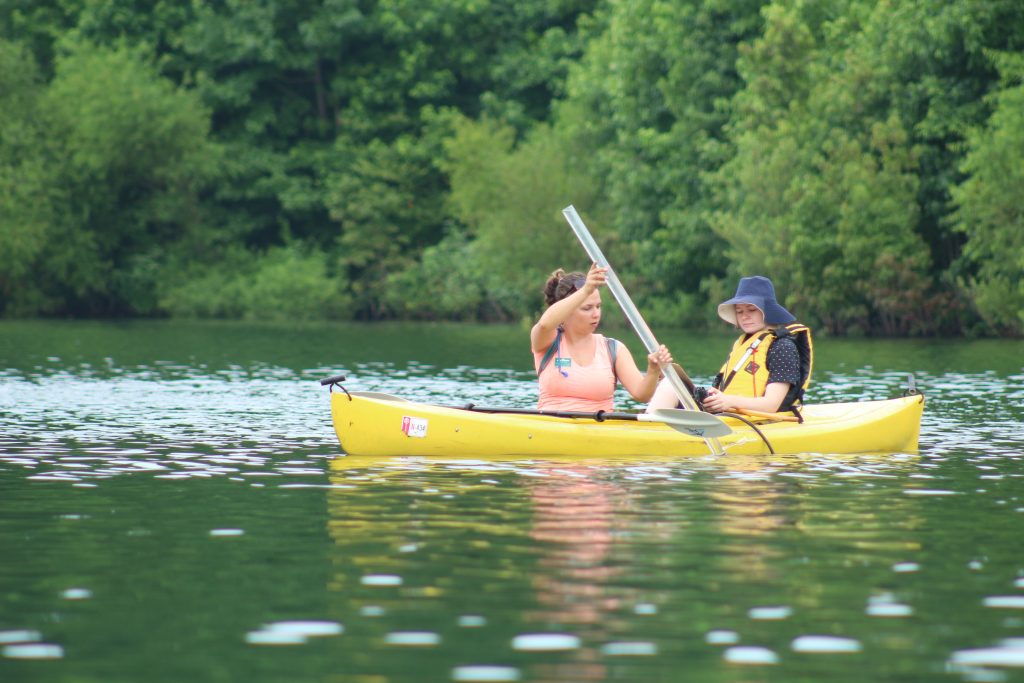 Schumm and McClanahan paddle to the middle of the Irrigation Lake to conduct water testing and acquire samples. They have to get the water sample from the deepest part of the lake to ensure that the data is accurate and precise.

We visited eight sites to collect water samples, which includes kayaking out to the middle of irrigation lake, battling poison ivy, and looking out for fallen branches. The following procedure applies to each of the eight collecting sites. First, they would use a Thermo Scientific Orion 4Star Meter to measure temperature, pH, and dissolved oxygen. Then, the pair pulled out a turbidity tube with a secchi disk at the bottom to determine the water clarity. They would fill the tube up to the top with water and slowly let the water out until they could see the black and white secchi disk at the bottom. The height of the water remaining in the tube would be indicative of the sample’s turbidity. The last step is to call in the Nasco Sampling Pole with a container attached to gather 1 liter sample for testing at the lab later. 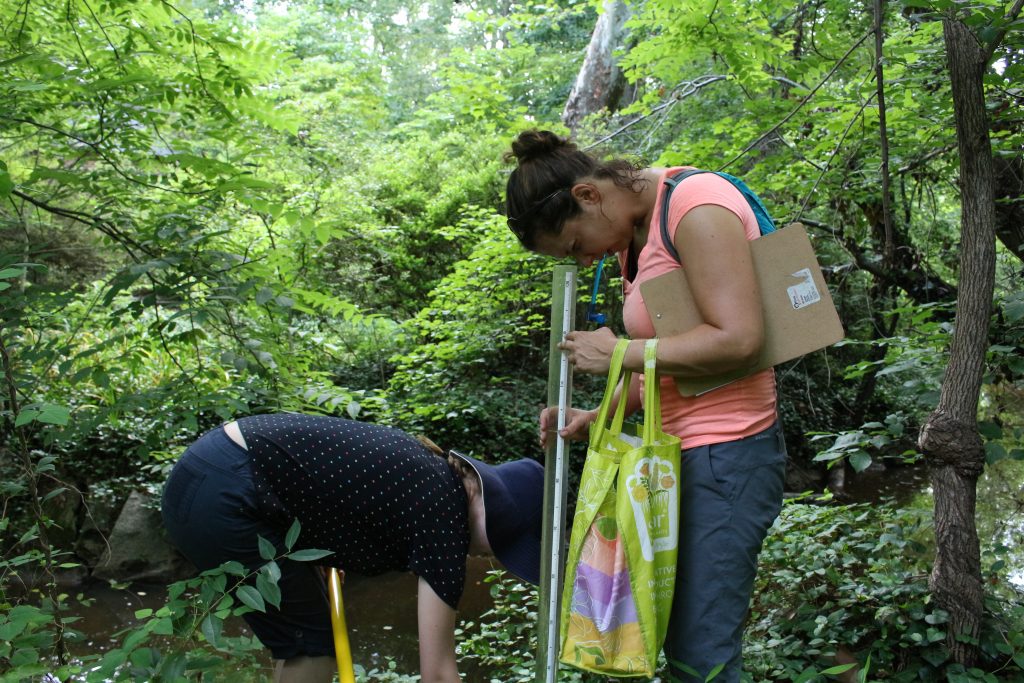 Schumm looks through a turbidity tube with a secchi disk attached at the end to determine the clarity of the water. McClanahan drained the water out of the tube until Schumm could see the black-and-white disk at the bottom. 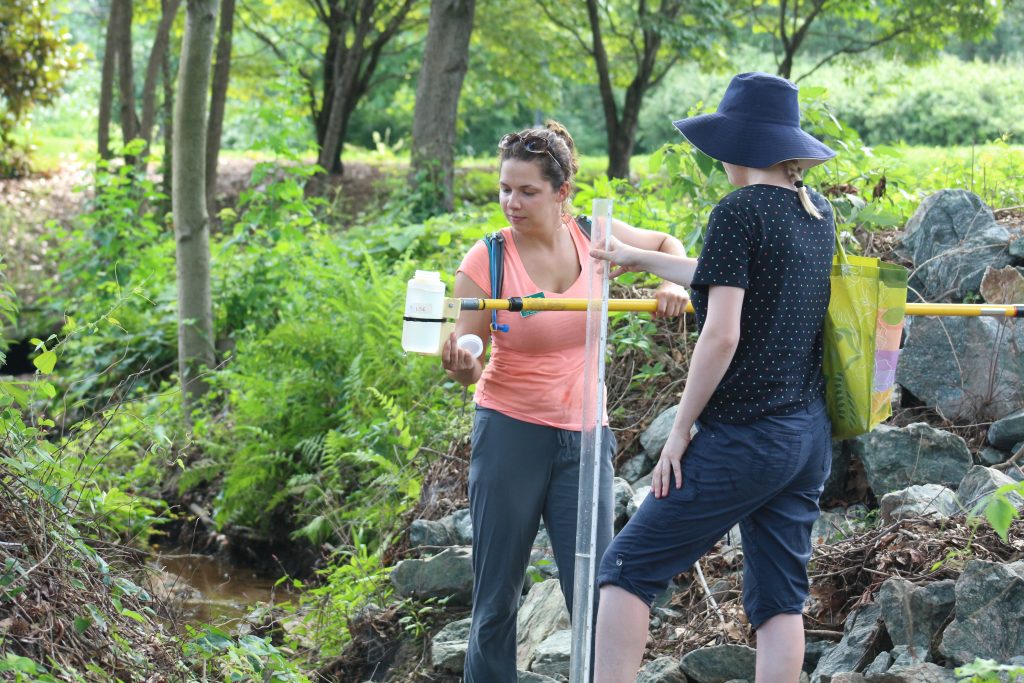 Schumm and McClanahan getting ready for the turbidity test. This is the eighth site and their last stop, at the creek near the front of the Garden in front of the Robins Visitor Center. The water level is so low that they had to walk for a bit to look for a spot deep enough to get the water sample. We finished around 10:30 a.m., which was great, as the day was starting to get hot.

At the makeshift lab, which is essentially a table with a spread of test kits, a test tube rack made out of tree trunk, and the Chemetrics V-2000 Photometer — probably the most valuable equipment in the “lab,” Schumm and McClanahan conducted a series of tests for E. Coli, phosphate, nitrate, and ammonia (which are indicative of fertilizer usage and pollutants). 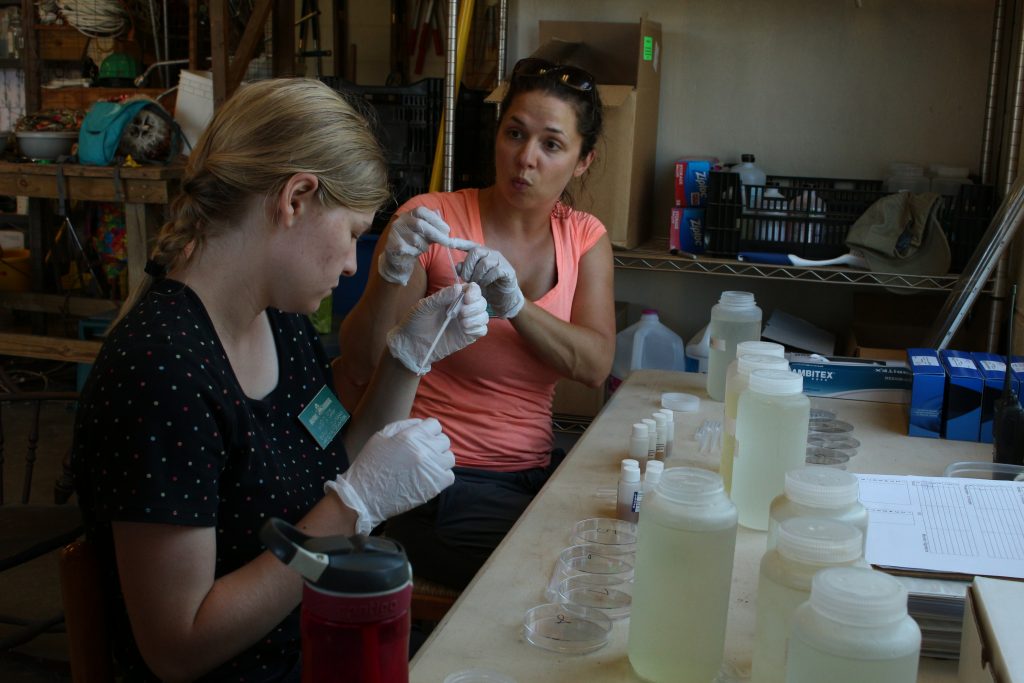 Schumm instructs McClanahan on how to conduct the E.coli test on the water sample. Schumm gets a 3 milliliter sample of water and adds it to a coliform growth medium used for the differentiation of E. coli from other bacteria. Once added, each sample is poured in a petri dish and incubated for 24 hours . 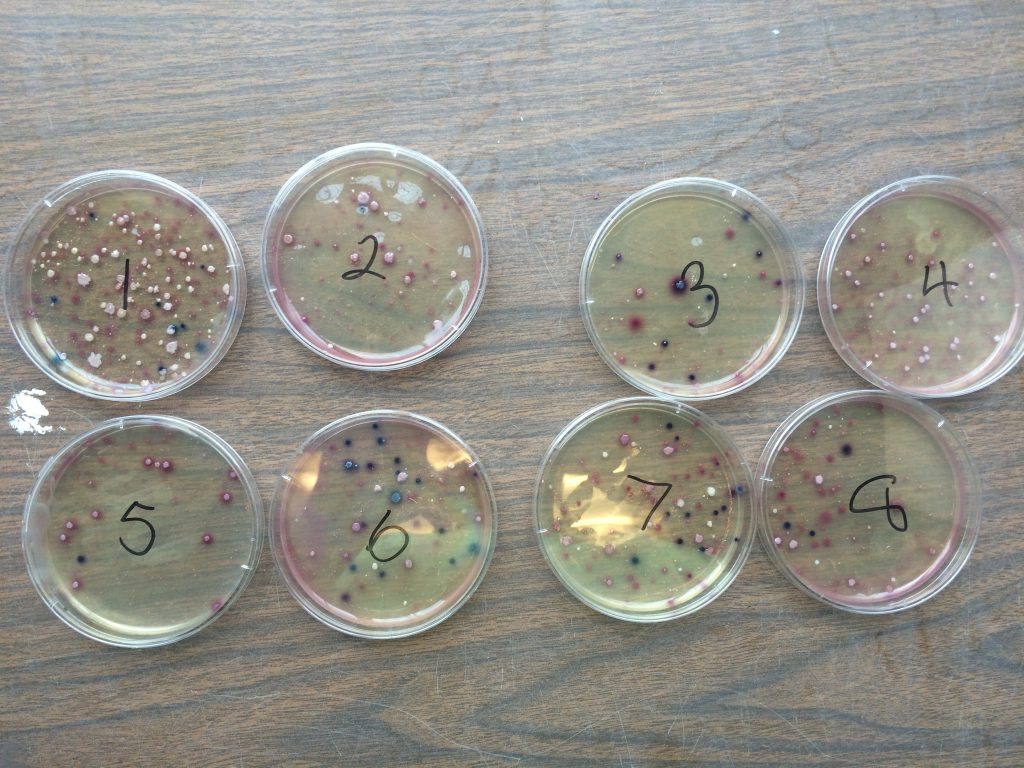 The E coli test’s petri disks after incubation. The dark spots are E. coli colonies while the pink spots are coliforms — mostly friendly bacteria commonly found in water and soil. Schumm and McClanahan count the colonies to determine the colony forming units (CFU), which gives a rough estimate of viable bacteria or viruses in a sample. 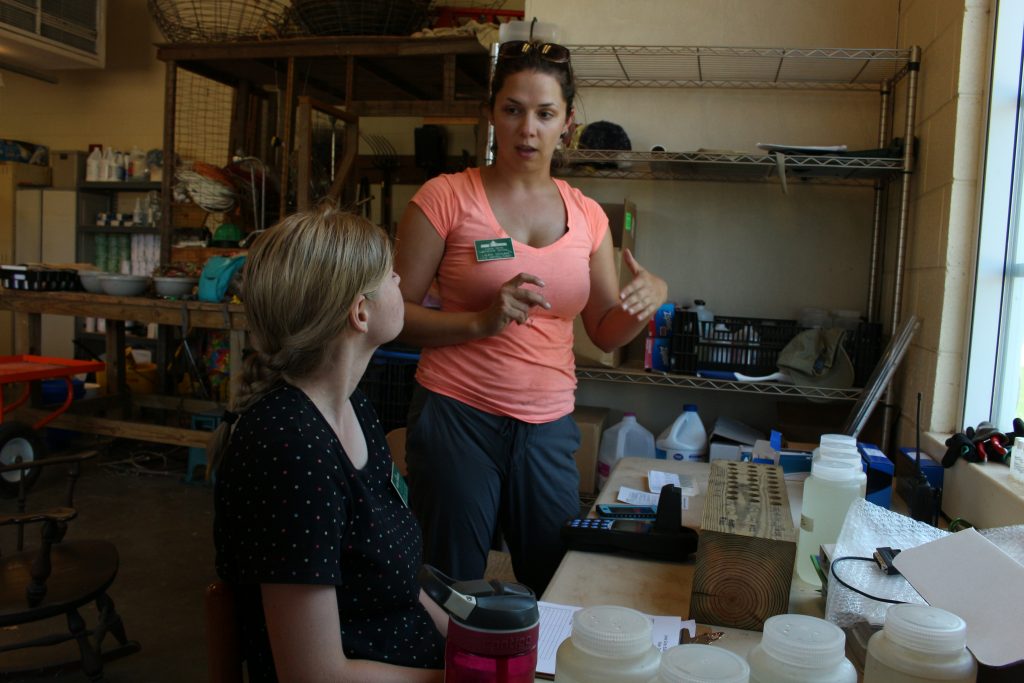 Schumm and McClanahan move on to the second set of tests to determine phosphate, ammonia and nitrate levels in the water samples. You can also see the Chemetrics V-2000 Photometer (the black device on the table) and the handcrafted rustic tube rack that I think is quite unique.

Every three months, we also send our sample to EnviroCompliance Laboratories Inc. in Ashland for total nitrogen and total phosphorus testing.

What is the result and what does the water tell us about our horticulture practices?

Data collected in 2015 shows that water quality at the Garden has improved compared to 2014 levels. Nutrient levels have decreased and dissolved oxygen levels have increased to reach better recreational freshwater system requirements. This result means that our water management practices are probably working to reduce fertilizer and pesticide runoff within the Garden. For example, to reduce runoff, we’ve replaced more of our turf grass with water-loving woody and herbaceous plants around the lakes. These rain gardens and buffer plantings and help to prevent fertilizers and pesticides from being washed away into our waterways and storm drains.

Another factor that helps is the Floating Island Garden. (At first, I thought it was only ornamental. Today, I realized that the Floating Island Garden is part of a collective effort to improve water quality.) In 2013, we partnered with Chesapeake Bay Foundation to install this floating wetland, which allows plant roots to grow into the water, soaking up excess nutrients and reducing risks of algae blooms. Ever since, we have witnessed a decrease in nitrate, ammonia, and phosphorous levels in Lake Sydnor, suggesting that the Floating Island may have a positive impact on the water quality. I think it’s a pretty neat practice to use organic plants as a natural filter.

What’s more? If you ever come to the Garden early, from March to June, it’s possible that you may run into some Border Collies chasing off those Canada geese that are trying to build a whole empire at our Garden. The dogs never touch the geese, they just create an unfavorable environment for nesting by introducing the presence of predators. It’s our humane way to reduce their population by preventing them from nesting, thus decreasing the number of pollutants in the water due to Canada geese droppings. The water testing results in the past two years show that the levels of nitrate and ammonia dropped significantly in correlation with the goose population’s decline.

Did you know that the irrigation water we use at Lewis Ginter Botanical Garden comes from lakes built specifically to collect rainwater and recycle it into water we can use to sustain our plants during dry spells?

Details
Message from the Director: What's Your Watershed Address?

We have been thinking very hard about water at Lewis Ginter Botanical Garden. Our strategic plan focuses on water conservation as our first and foremost goal over the next few years.

Have you ever had a dream to do something that you knew was the right thing to do, but it took years of working toward that goal to make it a reality? At Lewis Ginter, we’ve had a dream like this for a while — it’s called our Water Management Plan & Demonstration Garden.