Spinning the Thread of Life

Spinning is an ancient craft dating back thousands of years that can be quite delightful to watch. If you want to add an unconventional — yet no less fun and mesmerizing — activity to your holiday schedule, join us for a spinning demonstration in the Lora Robins Library as part of the Natural Plant Dyes Exhibit during Dominion GardenFest of Lights. Experienced spinners Judith Towers, Becky Blake, and Jan Glass will be demonstrating two methods, one with modern spinning wheels and one involving handspindles, which were used before the wheels evolved. In addition to the craftwomen working their magic, visitors will be greeted with a colorful display of natural fibers, such as wool, angora, cotton and silk, which have been dyed with plants (and insects!). Some of them have even been dyed with plants from the Garden. 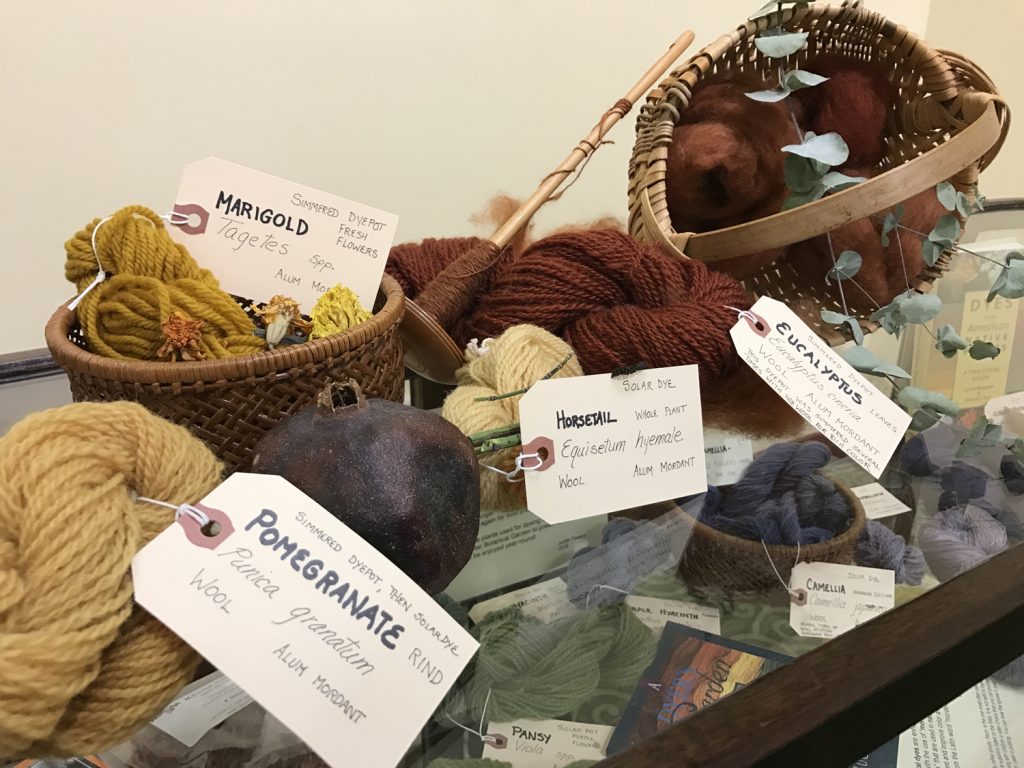 Part of the spinning demonstration is a colorful display of natural fibers colored with natural dyes, from camellia and marigold to eucalyptus and horsetail. 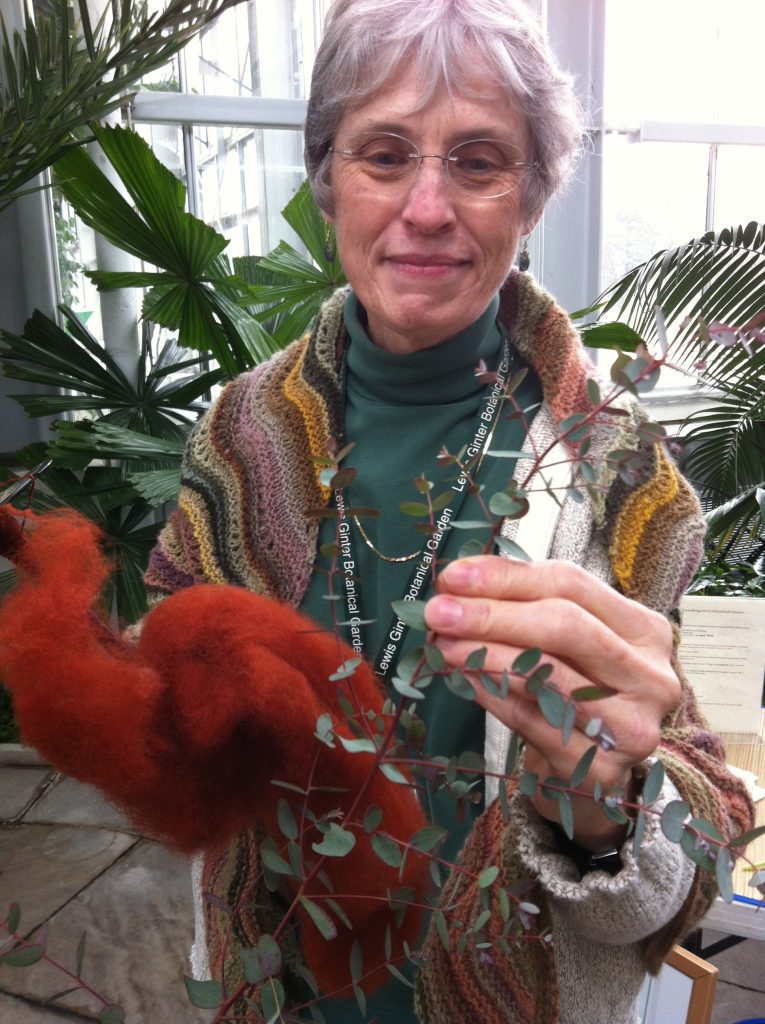 Judith Towers, one of the demonstrators, is a long-time handspinner. After dyeing her very first skein of yarn with apple bark, which makes a light brown dye, back in the late 70s, Towers decided she should learn to spin her own yarn because it looked like fun and could probably help her cut cost. “It wasn’t cheaper, but I loved it! In 1980, I bought a spinning wheel and a large loom!” On what makes spinning special, Towers said: “Handspinning is soothing and relaxing and allows the spinner to spin many different fibers, to choose or dye fibers in appealing colors, and to spin yarn of any weight from very fine yarns make lacey items or thick yarns to weave or knit into blankets or winter clothing.”

If you are new to spinning, this event may be an eye-opening experience where you can touch and examine up close natural dye sources, from dried flowers, nuts, leaves, and barks to cochineal, a scale insect from which the natural velvety red is derived. What’s more? You get to feel the fibers’ texture, be it silky or woolly, and see how those interwoven threads are spinned, while also learning about natural dyes and the history of handspinning and natural dyeing. You can talk to the demonstrators about natural dyes and fibers, discuss modern spinning wheels as well as antique wheels, and ask them any questions that you may have (there is no such thing as a silly question, so don’t hesitate!) 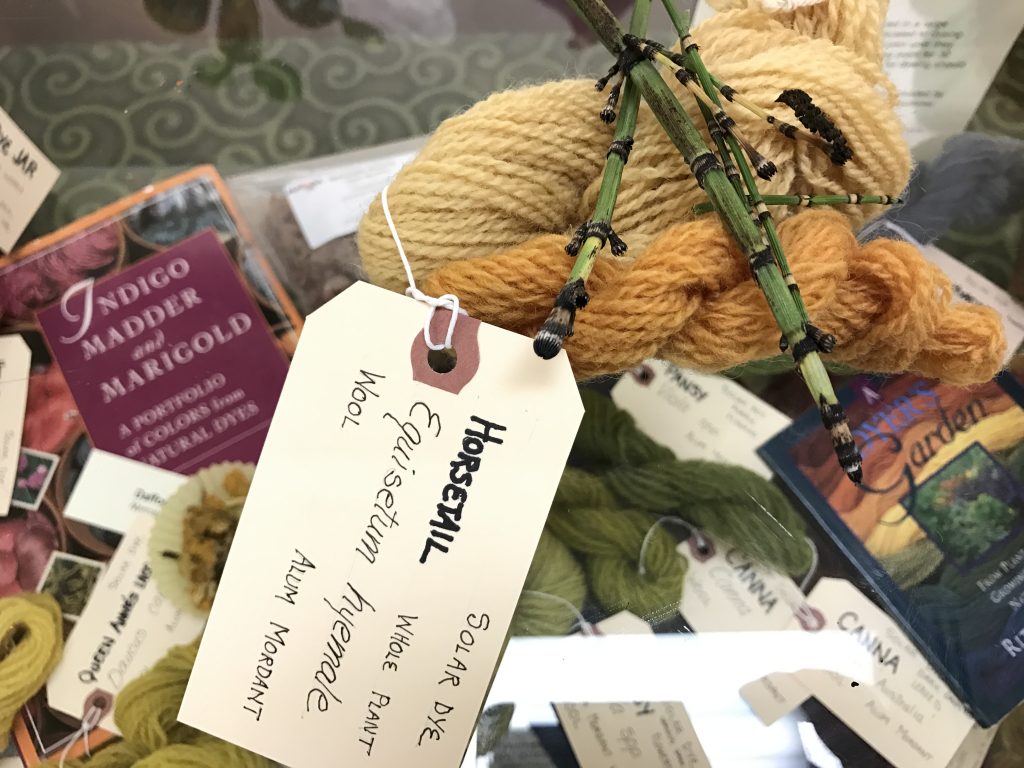 The spinning demonstration will feature lovely baskets of natural fibers made with natural dyes. Who would think that the greenish peculiar-looking horsetail can be extracted and turned into this light ivory color?

Due to time constraints, the demonstrators will not be able to teach you how to spin (This craft takes a while to learn and involves one-on-one instruction.)  If you are really interested and want to pick up spinning as a new hobby, the demonstrators, who are members of the Richmond spinning guild Clotho’s Handspinners, can offer more information on how you can join a group of fellow spinners who are passionate about the craft and its roots in history and mythology. The Guild’s mission is to promote handspinning across Central Virginia through education and preserve it as a cultural heritage. Some of the yarns, and scarves included in the display, were handspun and handwoven by members of Clotho’s Handspinners Guild.

“As you spin, you connect with the past. Handspinning was the only way that threads and yarns were made for thousands of years. Handspindles were used until spinning wheels were developed almost concurrently in China, India, Persia, and Germany, around 1257 – 1,298 AD. Knowing that you can do something by hand that was essential for survival in the past, and that you can use fibers of your choice to create something useful and beautiful is fulfilling and satisfying.” -Judith Towers

The spinning demonstration is part of our Natural Plant Dyes Exhibit, which showcases the fascinating microscopic science behind natural dyes.

Garden volunteers Judith Towers, Becky Blake and Jan Glass will demonstrate handspinning and show fibers dyed with plants, some of them from plants grown at Lewis Ginter Botanical Garden.

This year, Dominion GardenFest of Lights is an exploration of color: how color speaks to us, impacts nature, influences culture and even brings us joy.

Some things never change, but gardening trends certainly do. Following are predictions for the New Year’s trends, according to retailers and the “2016 Garden Trends Report.”

See a PDF of color facts from GardenFest display the Kelly Education Center.