The Earth Moved Under my Feet

“The earth moved under my feet today,” at least that is what I told my husband when he asked about my day in the Children’s Garden at Lewis Ginter.  I expected him to ask “…another earthquake?” and mused over the ways I could string him along with my guessing game. After all, the statement was slightly elusive and would give me room to dodge and swerve through the possible probes like, were there rocks tumbling into my path, earthworms moving toward the surface for a snack, ant migrations carrying soil particles as they build new nests, voles tunneling inches beneath where I stood… Instead, he quipped, “You saw a snake.” That was his final answer.  He was right-on with his guess, just as he has been when he has guessed every package I have presented him for birthdays and Christmases since 1992.  That was the year I had found an old oak desk chair that he had never asked for and wrapped it in an appliance box covered with two rolls of paper and a bow.  You are probably wondering the obvious next question of the day, “What kind of snake was it?” Well, I have learned that a garden snake is not just a garden snake. There are many kinds of snakes that might live in a garden in central Virginia just as there are many kinds of flowers that bloom in March at Lewis Ginter. 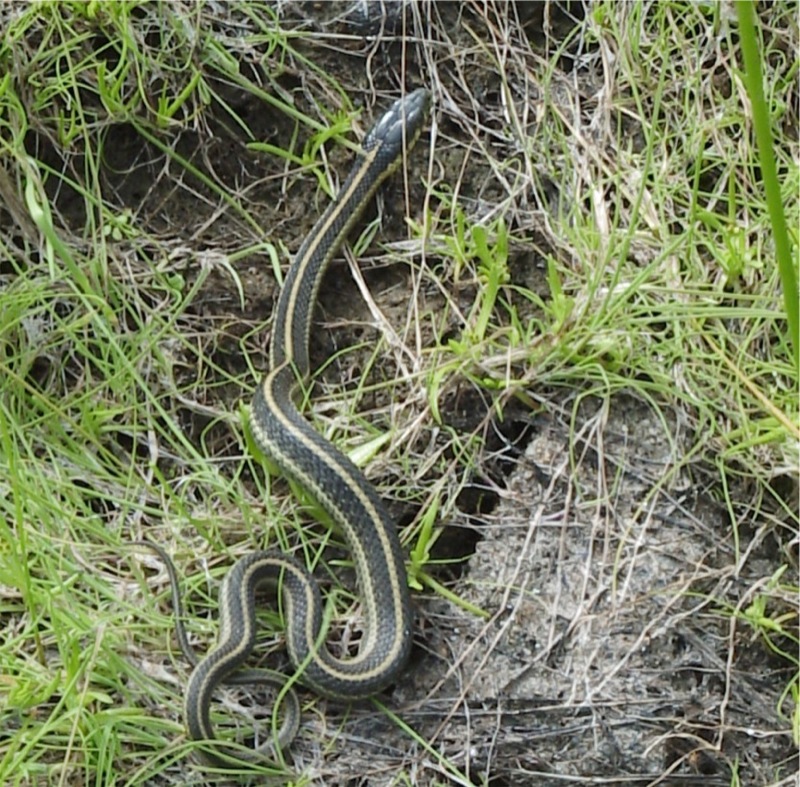 This one was greenish-brown, with stripes down his back, about the length of my forearm and as thick as my index finger. That is the finger I pointed with as I squealed “Snake!” when I discovered him right under foot.  He was a Garter snake.  I had been digging with a team of volunteers who meets weekly to help with garden projects that are constantly stirring.  On this particular day, we were dividing and transplanting goldenrod that will bloom in the fall. They lie just beyond an expansive bed of pansies which are blooming this month. I was thankful that my teammate, Cyane, has a passion for garden critters.  She scooped him up with gloved hands and carried him off to a more protected area in the garden where he can continue to patrol for snacks such as pest insects, mosquito larvae, slugs, snails, crickets, rats, mice and voles.  I guess he could be considered a garden volunteer, too, as he serves to protect the plants from pesky destruction while holding down the mosquito populations. He’ll have much to do in the upcoming season while being released to assume his chores.  I should name him Pointer. Besides being as wide as my finger, he pointed to the fact that many things are beginning to stir in the Garden. The soil is warming, flowers are budding, volunteers are digging and surprises are popping up all around.