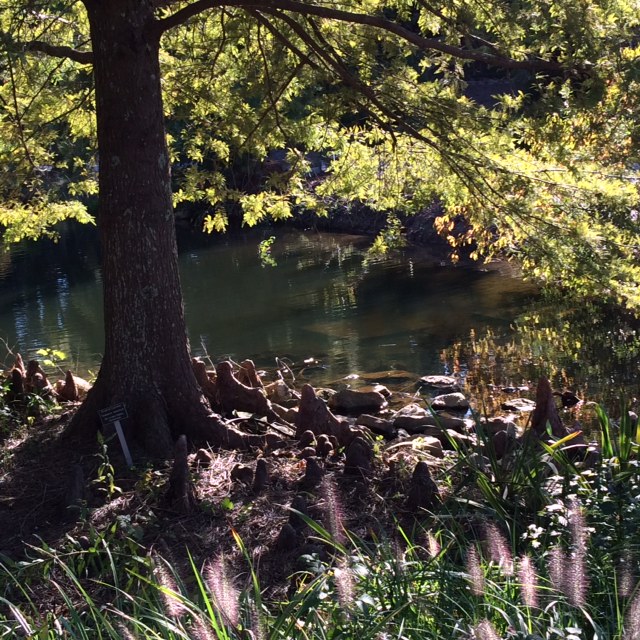 Last month I uncovered something mysterious growing around the rim of the West Island Garden. Our swamp cypress trees have knees. It’s not that we didn’t know they had knees. We did. We just don’t know why. No one does. The cypress trees are keeping it a secret.
Swamp cypress tree (Taxodium distichum) knees are woody projections that sprout above water level, growing vertically from the knobby roots of bald cypress trees. You can find them congregating around the trees that grow in spots along Sydnor Lake at Lewis Ginter Botanical Garden. Because they have a funny habit of tripping people, they must have a sense of humor.
Cypress knees can vary widely in size. The height of the knee seems to be determined by the average water depth and the density of the surrounding soil. The tallest knee on record is 14 feet, found on a tree growing on the shore of the Suwannee River, which flows through Georgia and Florida. The knees are generally solid, but can become hollow over time as they rot. In cypress plantations, knees grow on trees as young as 12 years old.

Even though they are conifers, bald cypress trees are not evergreen.  They lose their leaves every autumn (as their name suggests,) and grow new ones in spring. They are related to the redwoods and sequoias that grow in California. 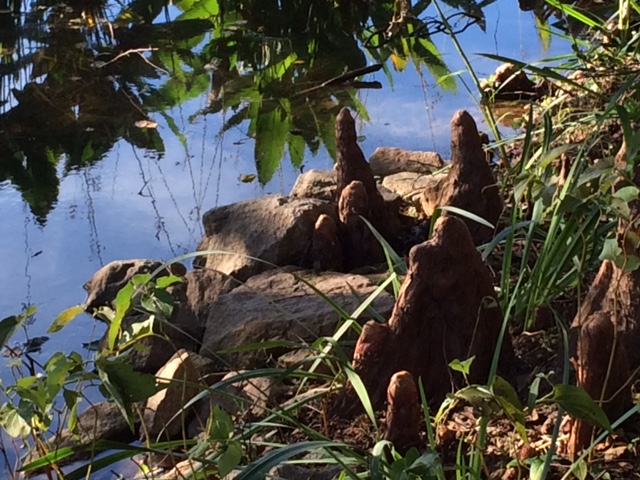 Highly resistant to rot, the heartwood wood of mature trees has historically been valuable for construction (fence posts, doors, flooring and caskets,) as well as ornamental carving. But because they are slow growing, cypress is rarely harvested for timber today.

Bald cypresses are slow-growing trees that can live to be 600 years old. Our trees at Lewis Ginter Botanical Garden were planted in 1993. The species is well-adapted to wet conditions along riverbanks and swamps. They are native to the southeastern United States, growing in the Mississippi Valley drainage basin, along the Gulf Coast, and up the coastal plain to the Mid-Atlantic States.They are also found in dry areas and are frequently planted as ornamental trees. Trap Pond State Park in Delaware has the northernmost stand of bald cypress in the United States. Closer to home, there are tidal bald cypress forests and woodlands of note in the Chickahominy River (in Charles City, James City, and New Kent counties.)

In the wild, cypress trees play a very important role in soaking up floodwaters and preventing soil erosion. Environmentalists love them for their ability to trap pollutants. Frogs, toads, and salamanders prefer cypress swamps for breeding grounds. Wood ducks nest in hollow trunks and catfish spawn in submerged hollow logs, while bees, wood ducks, barrel owls and raptors nest in the treetops. 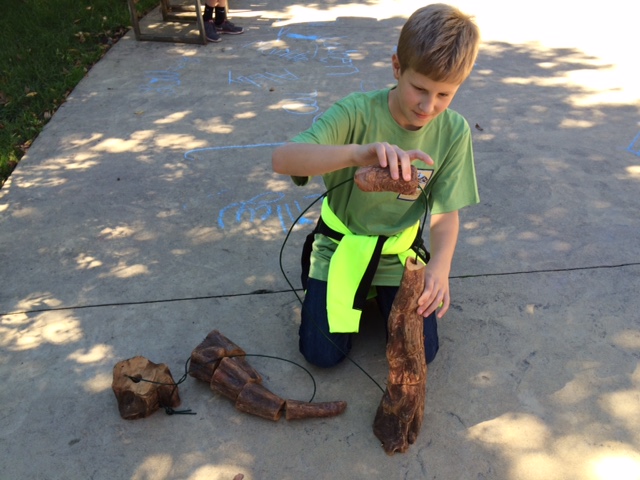 In the Children’s Garden you can re-assemble a cypress knee that we have sliced into sections. It’s not as easy as it looks!

Botanists have proposed many theories about the purpose of these peculiar knees. According to Cypress Knees: an Enduring Enigma published by the Arnold Arboretum at Harvard University, it has variously been thought that the knees were key to collecting oxygen, accumulating nutrients or storing carbohydrates, all functions vital to a tree’s survival. Mechanical support has also been proposed a reason for the knobby knees, perhaps helping anchor their host’s roots in the soft muddy soil where they like to grow. But one by one, each of these theories has been disproved, either in laboratory tests or simply by removing the knees of swamp dwelling specimens which continue to thrive without them.

I like to think they are the calcified remains of ancient dragon spines, converted to tiny homes for water-loving elves. They could be underachieving stalagmites, there for clever dwarfs to harvest and make torches, clubs and musical instruments. Or, perhaps they are simply unicorn hatchlings waiting to emerge.
The truth may be that cypress knees evolved in response to environmental pressures that no longer exist. If that is the case, their real reason for being may mystify us forever. 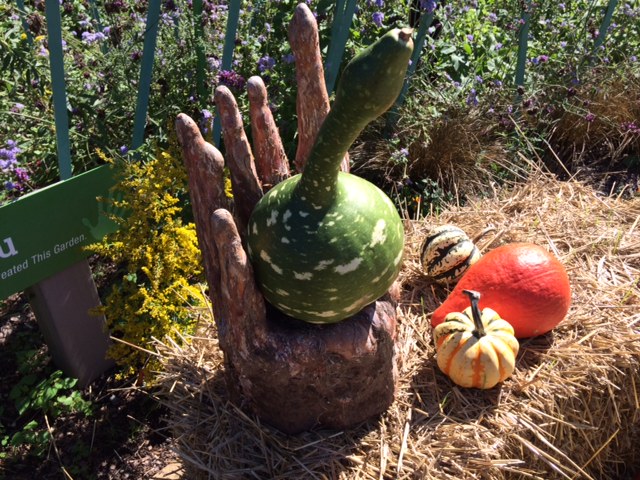 One of our favorite “October Oddities” is a hand made from an ambitious cypress knee.