Why Gardening Makes Me Happy

Before I had kids, whenever I felt grumpy, regardless of the season, I started work on my garden. In no time, my grumpiness floated away into the sky or down into the soil, I’m not sure. Hours passed.  I’d lose track of time, only to be brought back because the sun was setting and it was getting cold and dark.

When the little ones came along, I took them out into the garden with me. Planting arugula, learning the names of herbs, and weeding. My garden was and is my refuge.  All the chaos of the day seems to drift away when you are just focusing on planting fall bulbs or a new crop of zinnia.

I guess I always thought that this transformative effect that my gardening had on me had more to do with “flow” and being outside in nature, more than it had to do with a complex algorithm of factors like dirt & bacteria.  But new research from Permaculture College in Australia, from Robyn Francis, an international permaculture designer, educator, and writer based at Djanbung Gardens,  says it really does have to do with digging in the dirt: 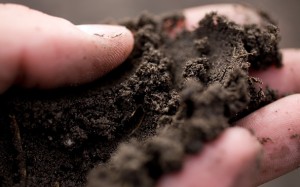 Getting your hands dirty in the garden can increase your serotonin levels – contact with soil and a specific soil bacteria, Mycobacterium vaccae, triggers the release of serotonin in our brain according to research. Serotonin is a happy chemical, a natural anti-depressant and strengthens the immune system.*

Even more interesting is that harvesting or foraging turns out to boost humans with another high from the brain chemical, dopamine. Here’s more:

Another interesting bit of research relates to the release of dopamine in the brain when we harvest products from the garden. The researchers hypothesise that this response evolved over nearly 200,000 years of hunter gathering, that when food was found (gathered or hunted) a flush of dopamine released in the reward centre of brain triggered a state of bliss or mild euphoria. The dopamine release can be triggered by sight (seeing a fruit or berry) and smell as well as by the action of actually plucking the fruit.*

Wow. Really?  Many of our 500+ volunteers at the Garden have remarked to me that they consider their weekly volunteer gardening gig with their fellow volunteers their “free therapy.”  Of course, they are kidding, but also, they are not. There is something magical about contributing to the community you care about. And apparently there is also something very magical about the act of gardening and harvesting your rewards. My guess is that there are many factors, including the endorphins you get from exercising while you garden that contributes to the good feelings that you get when you do it.

Plus there is something about the peacefulness of it all.   Or even the contradiction of the stillness and ever-changing qualities of nature like the Poem Forest at the New York Botanical Garden.  There is so much anticipation, but also patience, hope,  and a belief in the unseen. You cannot see your plants growing before you as you watch, and yet, somehow they do.

And in today’s modern world with our high-tech jobs (even while working at the botanical garden in social media) sometimes there is a need to escape the siren call of the smartphone with all its apps, emails and texts and just go be in nature.

Pico Iyer, recently wrote about this struggle in The Joy of Quiet a recent New York Times article:

Other friends try to go on long walks every Sunday, or to “forget” their cellphones at home. A series of tests in recent years has shown, Mr. Carr points out, that after spending time in quiet rural settings, subjects “exhibit greater attentiveness, stronger memory and generally improved cognition. Their brains become both calmer and sharper.” More than that, empathy, as well as deep thought, depends (as neuroscientists like Antonio Damasio have found) on neural processes that are “inherently slow.” The very ones our high-speed lives have little time for.

So let me leave you with this thought, and as you read it, be it on your PC, laptop or mobile device,  consider that perhaps that next thing you might choose to do this very minute is garden. And while you’re at it, make it organic gardening.  Francis continues:

A recent study in 2008 discovered that glyphosate, the active ingredient of Roundup, depletes serotonin and dopamine levels in mammals.*

We all push ourselves so hard. In work and play, at the office and at home, as parents and children, as students and teachers. Sometimes it’s difficult to know what brings us joy – not just pleasure, but deep, nurturing joy – unless we take time to listen carefully. For me, this is the best time of year for that. Connecting to nature outside always helps me to tap into what’s inside, to hear and feel the quiet.

* click through to the link and scroll down to see the referenced studies.

Update: For more information on Mycobacterium vaccae, the bacteria that causes serotonin to increase, see Hort Magazine’s blog, the Science and Art of Gardening.

Jonah Holland is Digital Content Manager at Lewis Ginter Botanical Garden overseeing social media, the blog, and the website. She is also a mom, yogi, open water swimmer, gardener, and seeker. She's been known to go for a walk in the Garden and come back with hundreds of plant photos, completely inspired to write her next blog post.