A Botanical Makeover in Richmond, Va. 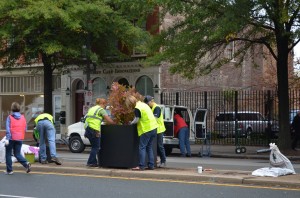 If you’ve ever watched HGTV, you know the allure of the “makeover.” We love to see dramatic, positive change happen right before our eyes. I had the chance to witness such an event yesterday with a “botanical makeover” in Richmond, Va.

Thirteen blocks of the RVA Arts District were transformed with 49 planters, 526 bags of mulch, 460+ bags of soil, and 1,200+ plants. The area encompasses the Broad Street gateway, one of the main corridors to downtown Richmond, and the 400 block of E. Grace Street. The work was actually done in two days: Monday, October 21 and yesterday, Oct. 23.

The project was led by Venture Richmond, a non-profit organization focused on community enhancement, working in partnership with the City of Richmond  and local businesses. Lewis Ginter Botanical Garden was the lead design consultant. The Garden’s Horticulture Director Grace Chapman and Gardener Leah Purdy created a plan using plants that have four seasons of interest and hold up well in an urban environment. 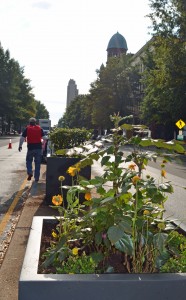 More than 250 volunteers from Capital One did the planting under the direction of Chapman, Purdy and LGBG Gardener Brian Vick. Maintenance and watering will be under the contracted care of The Kleane Kare Team, which partners with CARITAS and The Healing Place to hire persons in Recovery Programs who have been homeless due to addiction. 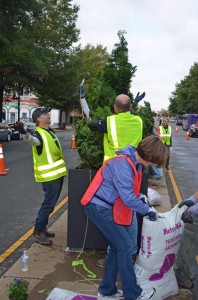 Work did not stop as a morning press conference was held on Broad Street. Richmond Mayor Dwight Jones expressed his delight, noting recent concerns about the aesthetics of the area and its prominent role as a “front door” to Richmond.

Lewis Ginter Botanical Garden’s Executive Director Shane Tippett commended the Capital One volunteers for letting their hands follow their hearts in volunteering that day. He also noted the positive impact such projects can have for us all: cleaner air, cooler streets, captured rain, reduced crime and increased business and visitation.

It’s an exciting continuation of the dialogue started when the Garden’s President & CEO Frank Robinson brought noted New York City urban design consultant Lynden Miller to town this past January. Miller says when cities don’t take care of their public spaces, people sense “my city doesn’t care about me.” When they do pay attention it makes the statement: “You matter. You are worth it.”

I urge you to take a look at the results of the “botanical makeover” in Richmond. Whether a resident or a visitor, you are definitely worth it. 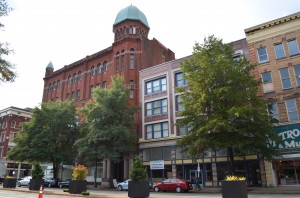