Thousands of visitors enjoyed Dominion GardenFest of Lights this year, and many of those visitors stepped into the library and back to 1895 as they viewed our exhibit on the Lakeside Wheel Club. However, it is likely that only one visitor had a unique connection to the Wheel Club: her father was a member of the Wheel Club. Helen Tanner visited GardenFest with her friend Peggy Stallings. Peggy is a volunteer in the library and was very excited to learn of her friend’s connection to the Garden’s history. But there’s more: Helen went on to tell Peggy that she had a silver loving cup her father won for a bicycle race. Now Peggy was really excited. There was a small hitch. While Helen was certain that the loving cup was still in her family but she couldn’t remember who had it. Peggy implored her to try to find it. 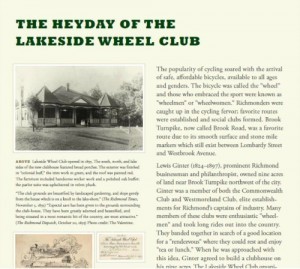 Peggy related this wonderful news to me and offered a photo of Helen’s father, Albert S. Tanner, to hold us over until the cup could be found. This was in December 2014. 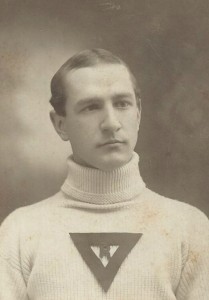 Albert’s photo had a place of honor on my desk. While I waited for the trophy to turn up, I researched him in our newspaper database* and learned about some of the races held by the Wheel Club. There were races on May 28, 1898 where Albert placed third in one event, and first in the Club Championship. For this he won a “handsome silver trophy.” Could this be the one we were waiting for?

In other bicycle related news of the day, in 1895, Tanner was one of many contributors to a fund to build the Missing Link Track. The Missing Link Track ran somewhat parallel to the Boulevard and had a cinder surface designed for cyclists. It is hard to know precisely where it was located, if it was completed, and how long it lasted. There is speculation that it was in the area now known as Myers Street. 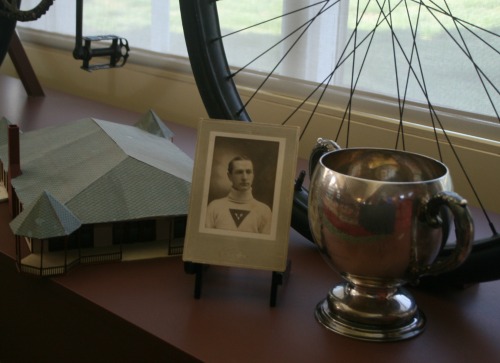 Albert S. Tanner and his trophy

Peggy received a phone call on March 19 from Helen who reported that the loving cup had been found! Helen’s sister Carol was searching for something in a closet and opened a box and there was Albert’s trophy. Peggy called me right away but frustratingly, we played phone tag for two days. Peggy and I were both elated to learn that the cup had been found. Peggy polished it so we could read the inscription.

Now we can match the trophy to the newspaper article. Albert S. Tanner won the Club Championship and the silver trophy as the first finisher in a one-mile dash. According to the Richmond Dispatch of May 29, 1898, “This was a most exciting event, and was closely contested by 11 young men. Mr. Albert Tanner won, with Mr. Charles R. Burnett a few feet behind him, while Mr. Percy Glinn took third place. While these events were sponsored by the Lakeside Wheel Club, they took place away from the club, “on the road running from the Hermitage Road to the Brook Place, between Westbrook and Bellevue.”

Helen Tanner, 83, and her sister Carol Cover, 93, both live at Westminster-Canterbury.  Helen does recall some talk of bicycling, but they don’t recall seeing a bike at home. He was a manager with Southern Bell Telephone and Telegraph Company and his cycling days were long behind him by the time the girls were growing up on Park Avenue. They know he attended McGuire School, then Richmond College for a time (1891 according to the newspaper) and that he was a member of the Commonwealth and Westmoreland Clubs. He married Ophelia Minor in November, 1920. He was born on January 23, 1874 and died at age 71 on December 15, 1945. 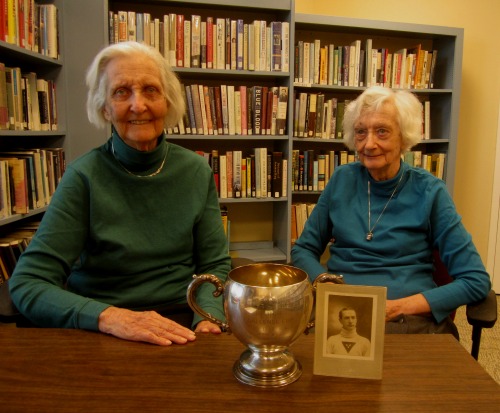 We are so grateful to have this lovely piece of history that Helen and Carol have donated to the Garden. It’s a tangible connection to the Wheel Club and one of its cyclists and helps fill out the story of the Richmond bicycle craze. And it’s a beautiful piece of silver work, appropriate to its time period. The cup is on display in the library in a glass case. The Lakeside Wheel Club exhibit is on view again and will remain in the library through September 2015, when another group of cyclists will race on our streets for a chance to win a trophy.

*For research, we rely heavily on ChroniclingAmerica: Historic American Newspapers, a digitized newspaper database covering the years 1836-1922. This is a free resource sponsored jointly by the National Endowment for the Humanities and the Library of Congress.