All About Orchids & The Orchid Show

This year, we are thrilled to welcome the Orchid Show and Sale to Lewis Ginter Botanical Garden for the first time. If you are in love with orchids or any kind of flower you’ll want to check it out. Thanks to the Virginia Orchid Society, you can attend free educational classes and shop for orchids from a variety of vendors in the Visitor’s Center. To see the beautiful displays of the Orchid Show in the Conservatory requires a Garden ticket and access is included with regular Garden admission. 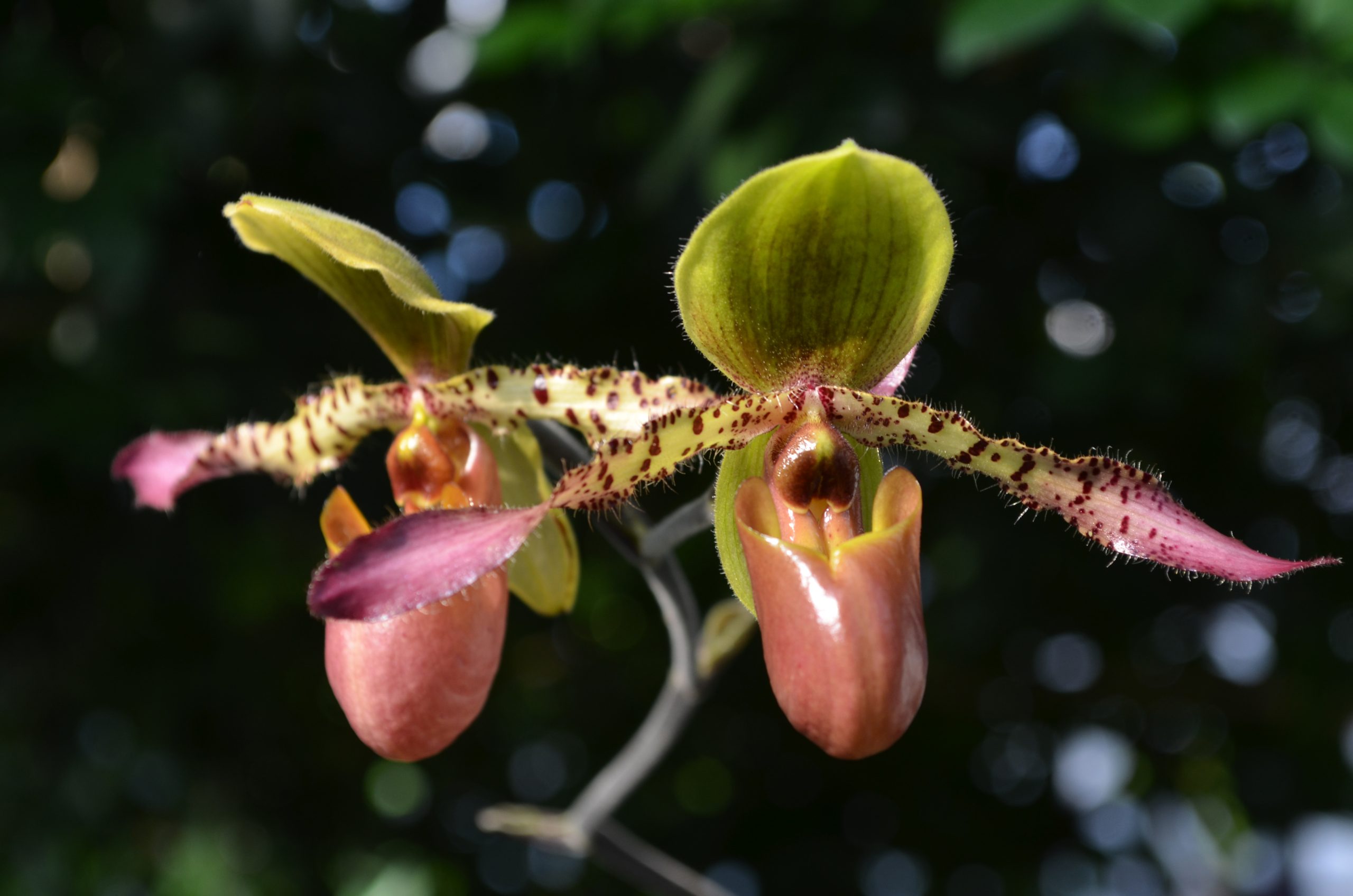 You may see orchids like this slipper orchid or Paphiopedilum at the Orchid Show on March 4-6, 2022. The Virginia Orchid Society has a mission to help those people to learn more about orchids and connect with others who have the same interest. We are more than happy to serve as a matchmaker! 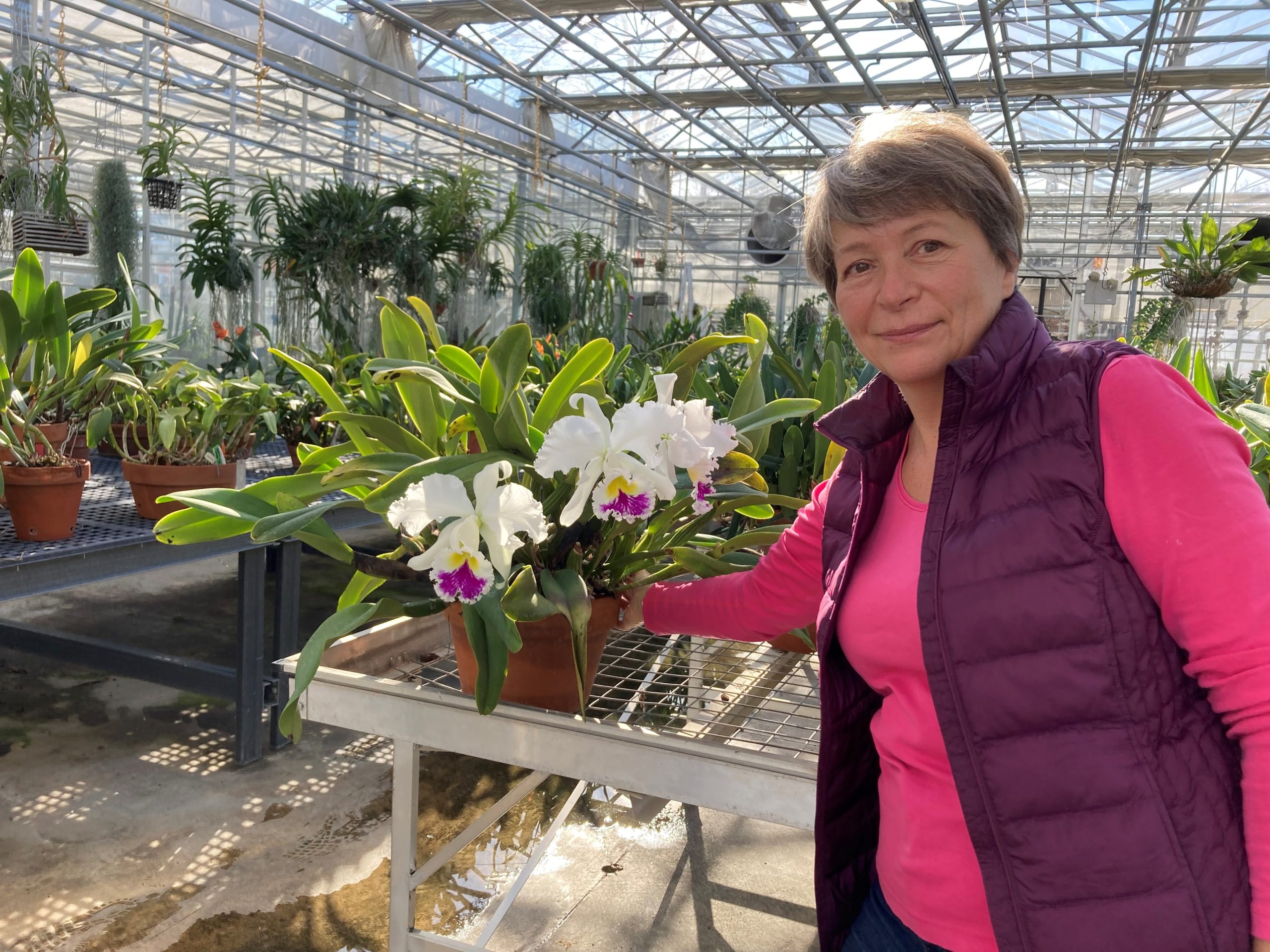 Irina Neverova showing off the Cattleya orchids in the Massy greenhouse behind the Conservatory where she volunteers.

A little about the orchid show: this event is an American Orchid Society accredited and judged show. That means that trained and certified volunteer judges from all over the Eastern Seaboard will travel to Richmond to judge this show. These judges must complete years of training and make a long-term commitment to serving as a judge. Judging for the American Orchid Society is a true labor of love and judges are not compensated for their time or travel expenses. The American Orchid Society is also a great resource for everything orchid —  from an orchid glossary to basic orchid care and information about orchid pests and disease too.  It’s a good thing too because there is SO much to learn and know about orchids!

For example, did you know that there are more than 25,000 species of orchids and that new species are being discovered all the time?  There are so many, that the orchid family is divided into 763 genera. Each genus (singular of genera) consists of many species. For example, the genus Cattleya consists of hundreds of species — we have 145 varieties of Cattleyas at Lewis Ginter Botanical Garden’s orchid collection alone! All Cattleya species have some similar traits, for example how and where they grow in nature, their leafing patterns and bloom shape.  In addition, there are orchid “alliances” which are groups of genera that have common characteristics and are similar enough in growing conditions (light, temperature and moisture requirements) that they can be crossbred. Judging is done by alliance rather than genera.  For example, the Cattleya alliance consists of Cattleya, Laelia, Epidendrum, Brassavola, Encyclia orchids. 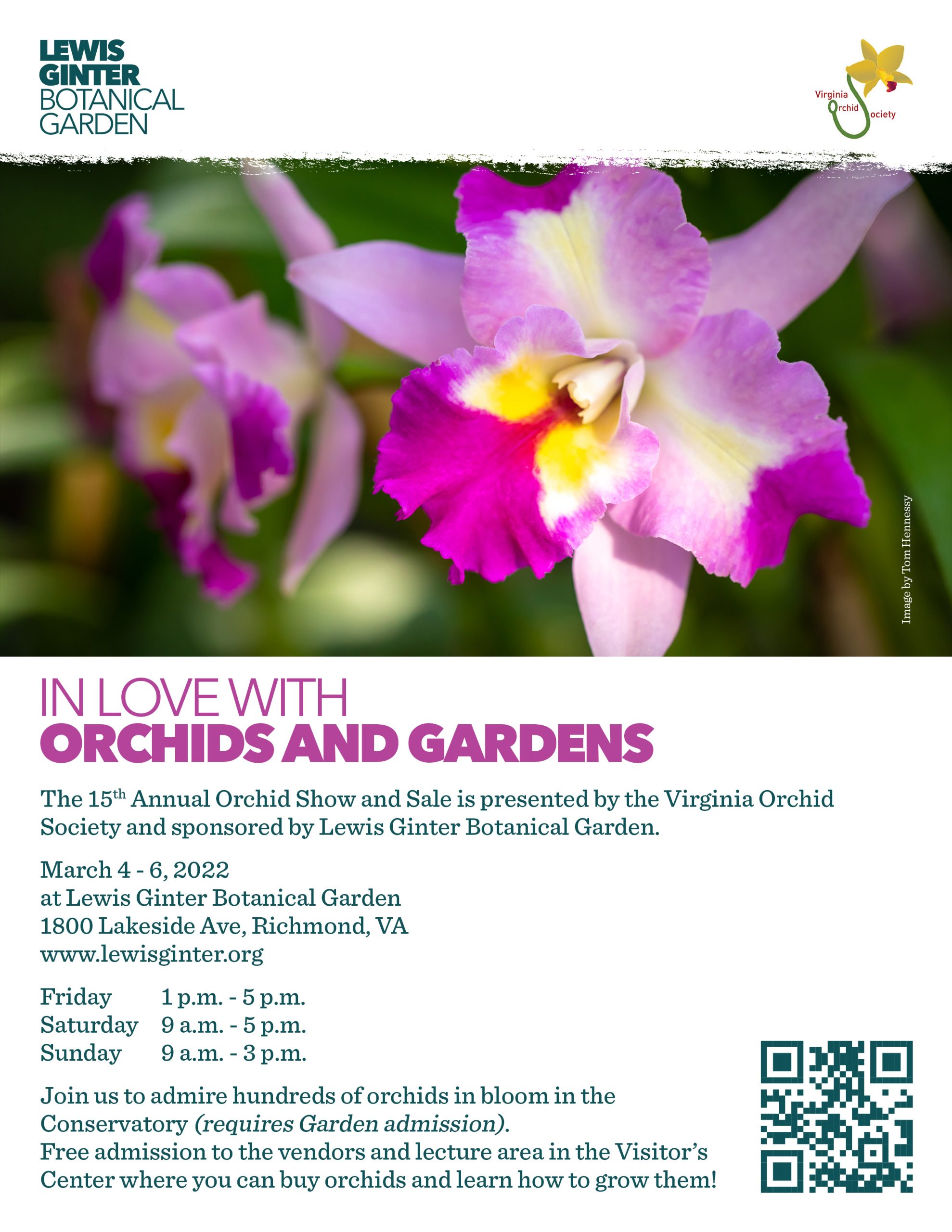 Irina Neverova, the co-chair of the Orchid Show committee (and also Lewis Ginter Botanical Garden volunteer) explains orchid judges are looking for some very specific things and it’s quite complicated. Many of these traits are achieved through crossbreeding. “Nature and Man put their hands together in crossing various species and creating hybrids. Nature did it spontaneously. Man did it purposely — to increase the size of flower or their number, to bring different colors in, to introduce fragrance. There are uncounted numbers of hybrids — in the hundreds of thousands, for sure. Some were created by growers professionally or by hobbyists who may have registered with the Royal Horticulture Registry (in Britain). But lots of hybrids were created and never registered.”

In addition, growing orchids to the blooming stage can take years — about seven years for Cattleyas and two to three years for Phalaenopsis orchids. So you can see lots of time and energy has gone into growing the select blooms which will be highlighted in the Orchid Show.

Neverova says that despite what you might think at first glance, you don’t need to be intimidated by orchids. “Lot of people consider orchids as exotic and expensive plants. They are still exotic in my opinion, but accessible. There are plenty of sources to buy orchids. Yes, you can find very-very expensive orchids if you are looking for rare or unique plants. But to enjoy beautiful flowers the garden centers and even big grocery stores offer a variety of orchids at affordable prices.” One way to do that is to start with seedlings that won’t be blooming yet but will cost only $10-$40. 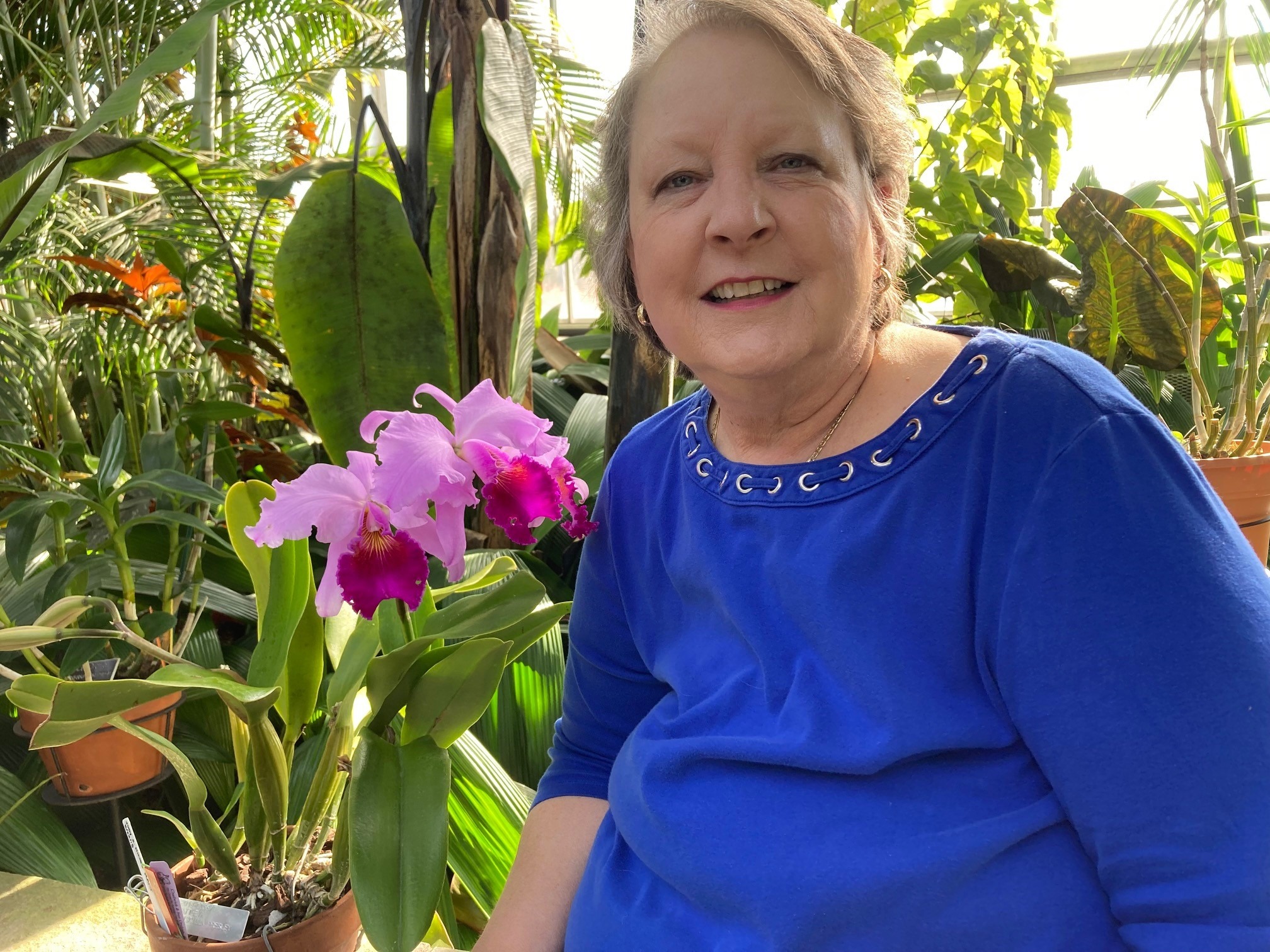 Donna Poland, the president of the Virginia Orchid Society, in the Conservatory with a Cattleya orchid.

“Yes, you will have to invest your time to grow them for a few years (and not to kill along the road) but the rewards of seeing it blooming for the first are very special to the heart and soul.”  of the owner. Of course,  it feels even better to share it proudly with other ‘orchidists’!” Her tips to success?
Read, talk, listen, watch, repeat. “Read books, orchid magazines, orchid societies’ newsletters. Talk to experienced growers at the local orchid society meetings or orchid shows. They all started small, like you are, but learned a lot and are always glad to share their knowledge.”

Donna Poland, the president of the Virginia Orchid Society explains that the organization formed in 1949 and they’ve been holding orchid shows since 1951! This year, she says, “We will have the judged displays from various vendors and other orchid societies in the North Wing of the Conservatory – most of the orchids there will not be found in the grocery stores!” So this is a real treat for not just orchid-lovers but for anyone who is interested in seeing something unusual. “We are extremely excited about it and looking forward to educating the public about the variety and beauty of orchids,” she says. 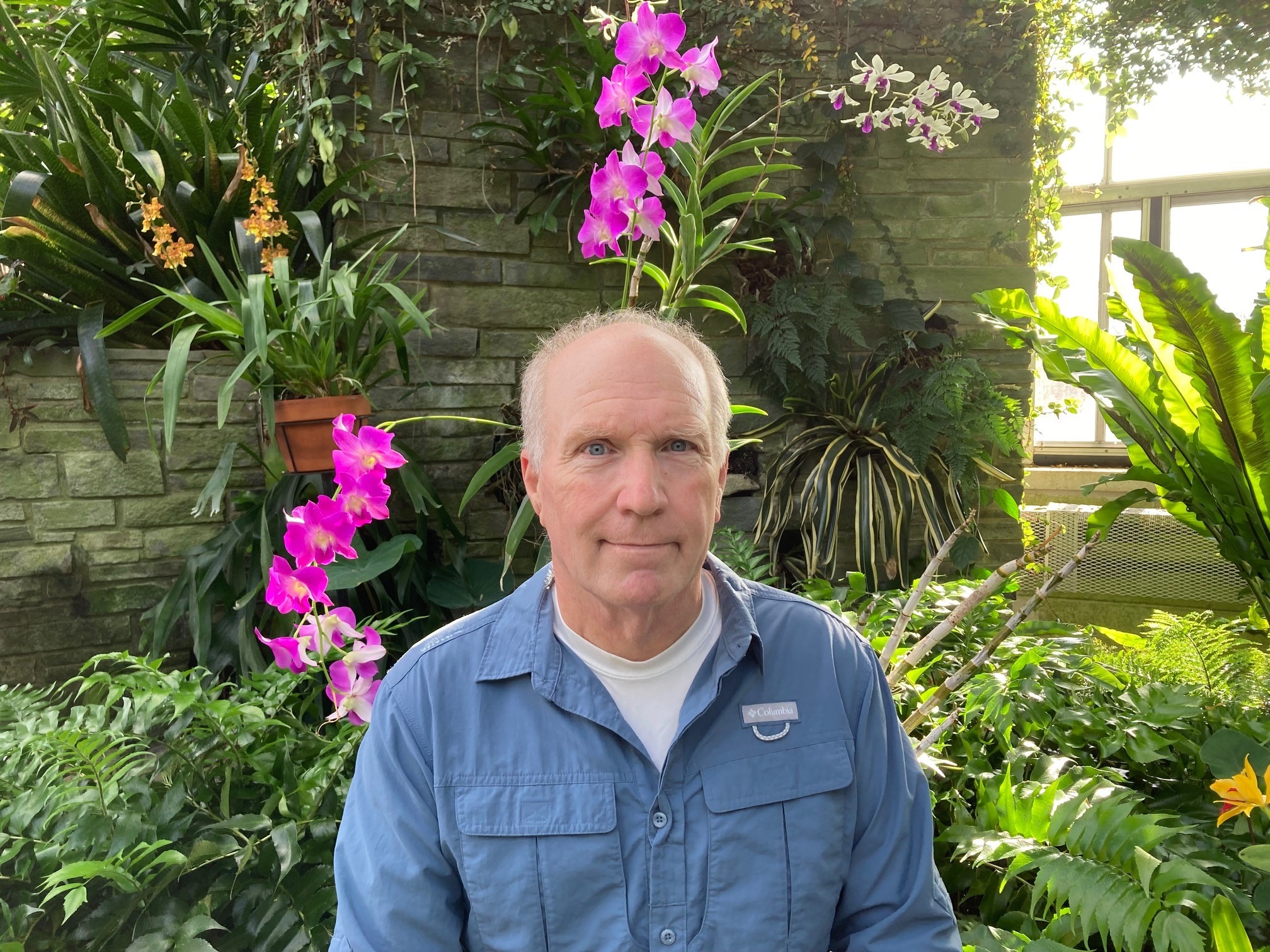 Each person comes to their love of orchids from a different path. Robert Rand Program Chair for the Orchid Society has been caring for orchids for 33 years but doubled his collection when his son was working for a local nursery chain store, noticed that orchids that didn’t sell were thrown into the trash. His son started “rescuing them” and bringing them home to his father who nursed them back to health. So you can see, it’s all about the knowledge of knowing how to treat an orchid and make it bloom. Stay tuned to our Orchid Show page for more details on the educational classes that will be available during the show, including an orchid repotting demonstration. Until then, here’s a cheat sheet of orchid vocabulary to get you started.

A few of the Most Common Orchid Types.

Phalaenopsis — Sometimes called “Phal” for short in orchid slang. Phalaenopsis are commonly knowns as moth orchids and are the most commonly sold orchid in garden centers, especially big grocery stores.
Cattleya aka Corsage orchid — Sometimes called “Catts” for short. They are big, bold and colorful.
Paphiopedilum (Paph) — Also called Lady Slipper orchids like the one shown in the photo above. Some say they look like they have “wings” and a mouth.

Phragmipedium (Phrag) — These beauties like to grow by streams in the wild.
Oncidium (no short slang) — Also known as Dancing Ladies, They look like little dancers with puffy skirts. Usually a spray of small flowers, but very prolific in the number of small flowers.
Cymbidiums (no short slang) — These large beauties have tall grassy leaves,  and very tall inflorescence with large, prolific flowers.

Have kids? Check out our self-guided Orchid Quest activity for kids!