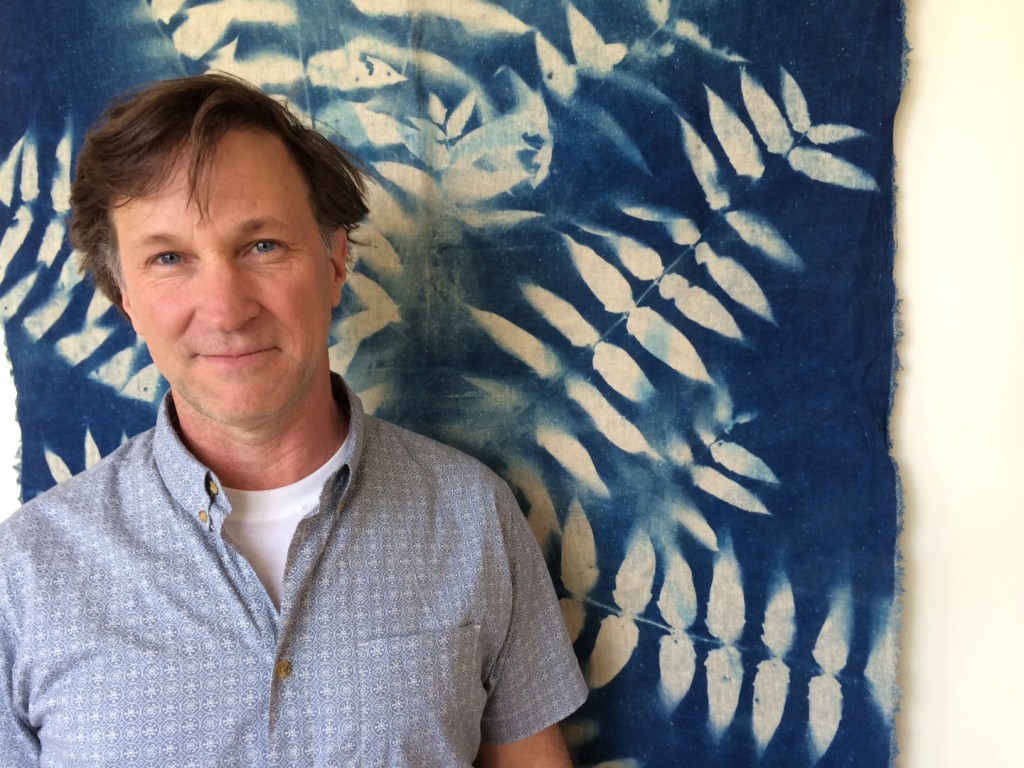 Organic farmer, community organizer, and artist Woody Woodroof  creates large scale botanical cyanotypes on fabric using the power of the sun. His work combines farming, the environment, and art, and asks viewers to slow down and notice the intricacy and beauty of the everyday plants and weeds around them.  The botanical cyanotypes show ‘Invasives’ continues through September 21, 2014 in Ginter Gallery II.  But you really won’t want to miss Woodroof’s artist talk on September 20, at 10 a.m. These prints are really cool and make a big impression, just like the artist. Woodroof is also founder and executive director of Red Wiggler Community Farm, an organic farm dedicated to providing employment for adults with developmental disabilities through a unique horticulture program. You don’t want to miss this artist talk. Woodroof will discusses his botanical art and more at this FREE-for-Members event.  Register: http://bit.ly/WoodyWoodroof

Artist Statement:
During the past several years as director and principal instigator of Red Wiggler Community Farm, most of Woodroof’s photographic work was limited to the documentation of the farm itself and, of course, the people working there. In 2005, Woodroof began working with cyanotypes and cameraless photograms as there was no darkroom readily available on the farm. Then it seemed natural for Woodroof, an organic farmer, to catalogue the crops growing in the fields around him and to use the tools and space available, such as the bathtub, to process the prints.

In 2010, Woodroof began to question the social and environmental impacts of using cotton fabric for his prints, and has since decided to use hemp; an exceptionally beneficial, soil building, nitrogen fixing crop considered far more sustainable than cotton. There are so many practical motives in the decisions around his work that the farm again inserts its influence into the process.

The most recent prints from Invasives are on display through September 21 in Ginter Gallery II at Lewis Ginter Botanical Garden. The cyanotype prints are made on 7 feet long pieces of cotton and hemp, and many of the plants chosen are considered non-native invasive ‘weeds.’ By creating beautiful and mysterious imprints of these undesirable plants, Woodroof transforms them into beautiful objects of art.

According to Woodroof, “We have seen it before throughout recent agricultural history. With the best of intentions we have introduced plants and trees from the other side of the world over the past five centuries. Might our science labs be introducing something today that we will find invasive in time? These prints explore both sustainable fabrics, invasive plants and the ironies of our solutions.”

Woody Woodroof studied photography at Denison University in the late 1980’s, receiving his BFA in Photography. His continued education, thereafter, included a series of intensive workshops taught by several photographers who would have a profound impact on his later development. Among these early influences, Linda Connor, David Sauer, Sally Mann and Emmet Gowin are possibly the most prominent. During the 1990’s, Woodroof landed in Tucson AZ, where his path crossed that of photo historian Keith McElroy at University of Arizona. McElroy kindly allowed him to take his History of Photography classes without Woodroof being officially enrolled at the university. It was McElroy who pointed Woodroof in the direction of photographer Ann Simmons-Myers, a well-known instructor of alternative photo processes and then a professor at Pima Community College. At PCC Woodroof learned gum bi-chromate printing and the cyanotype process and was exposed to a variety of other alternative processes.

Woodroof’s working with medium and large format photography might be described as pursuing classical formats within contemporary photography, but his experimentation with various materials, the building of cameras and the coating of unconventional papers demonstrated that his work was becoming decidedly more intuitive or primitive. Thrift stores became as important to his work as was the photographer’s formulary, where photo chemicals might be purchased. Cruising for any containers that might be suitable for adaptation into pinhole cameras or camera obscuras became part of the ritual… suitcases, trashcans, tobacco tins–whatever he might find–really could have in them the potential for new types of work. These years of eclectic education produced a lot of various types of work but Woodroof quickly points out that the process during this period was often more important than the ideas behind the work.

Woody surprised his friends and family when he changed gears in 1996 and left the southwest to found a community supported organic farm and non-profit foundation outside of Washington, DC. The Red Wiggler Community Farm, which is now in its 18th year, is a non-profit endeavor whose mission is to grow and sell vegetables as a framework for training adults with developmental disabilities. This is a simple statement that only hints at the various ways in which the farm has become integrated to its surrounding communities. A deeper discussion of the farm has to include several ideas such as slow food, local produce, horticultural therapy, vocational training, community involvement, volunteerism, market gardening and bio-diversity. Even the casual observer will begin to see that the farm itself just might be the creation about which Woodroof will always be most energized. The farm then becomes a logical point of inspiration for the possibility of artwork, or vice versa.