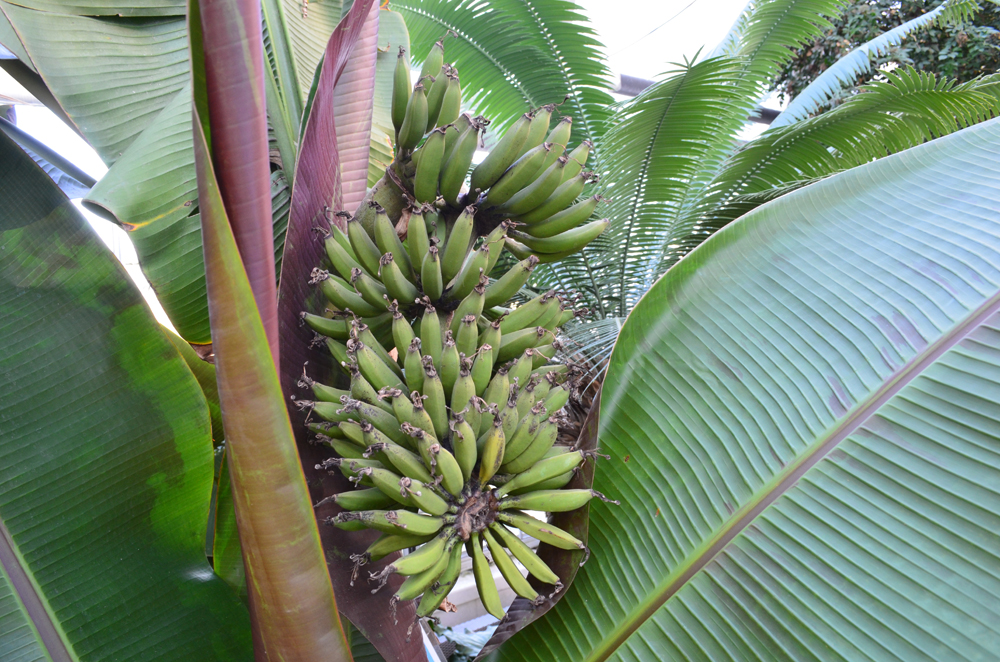 Look for Musa acuminata ‘Sumatrana’ or bananas in the East Wing of the Conservatory on your left, just after you enter.

Every week or two, depending on the season, and how much the blooms at the Garden are changing, we publish Bright Spots, a listing of many of the highlights you’ll want to see at Lewis Ginter Botanical Garden on your visit.  Each Bright Spots also features a “Did You Know” section highlighting something interesting about one of our specimens.  In this week’s edition, volunteer and Garden Guide Maggie Southwick features one of America’s favorite fruits — the banana.  Yes, we actually have bananas growing in the Conservatory! We love this story (and bananas) so much we wanted to share it with you. Enjoy!

Did you know the effort to protect tender plants in inhospitable climates goes back to antiquity. Remnants of greenhouses have been identified in Pompeii, where the “glass” used was probably translucent stone. “Orangeries” were first developed in the 15th century to protect these and other tender citrus plants. The first orangeries were wooden buildings with shutters, but by the 17th century  they became quite ornate masonry structures with windows on the south-facing wall.
The construction of the freestanding greenhouse or conservatory, with windows and roof  made of glass became possible in the 19th century, with technical advances in glassmaking and framing. Joseph Paxton, head gardener for the Duke of Devonshire, designed a conservatory at Chatsworth that was the largest in the world at the time. It rose 67  feet high, spanning a width of 123 feet and was 277 feet long, covering an acre of ground. Paxton referred to it as the “great stove” and it was here that he succeeded in growing the first banana to fruit, Musa cavendishii , in England, in May of 1836.
Lewis Ginter Botanical Garden’s conservatory has Musa acuminata ‘Sumatrana’ fruiting right now in the East Wing (the orchid wing). Be sure to look for it while you are admiring all the holiday decorations at Dominion GardenFest of Lights, or during a daytime visit.