One of the most frequent questions we get this time of year is about the magnificent beautyberry shrub. It seems that many of our visitors are enamored with this striking plant as soon as they spot it! With almost surreal metallic purple berries cascading down branches of vibrant green leaves, this is one handsome plant! The question we most frequently get? Is beautyberry native to Virginia?  The answer is complicated. Yes….. and no!

You see, there are several types of beautyberry and they look almost identical. Both American beautyberry and Asian beautyberries have bright green leaves on long cascading branches. Both feature bunches of bright magenta to purple metallic colored berries. Both attract birds and other wildlife. Both make for a great addition to a fall or winter flower arrangement. But, as we mentioned, one is native and one is not.  As with many native plants, American beautyberry was used by first nations people for a variety of medicinal uses, including the leaves being used as a natural insect repellant.  But that’s not the key reason our visitors are seeking out native plants like beautyberry. Over the years our visitors have become savvier as they’ve learned the benefit of native plants for our local ecosystem. Native plants are what was here naturally before human intervention.  Because of this, native plants require a lot less care and traditionally don’t need additional nutrients or extra water. Natives also are a natural food source for other native species in the area including insects and birds. So you can see, there might be some advantages to having the native variety, over the non-native species. 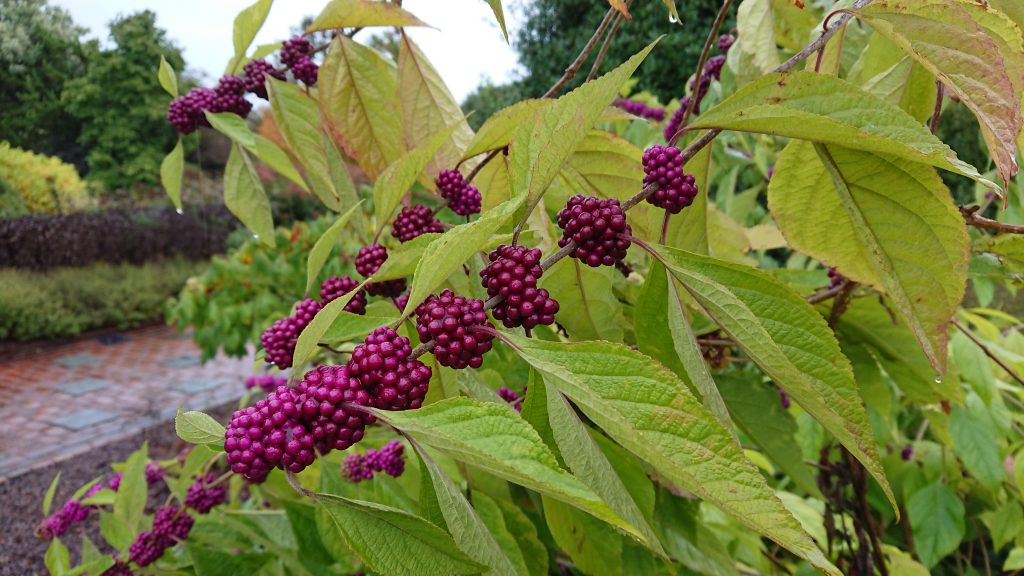 See how the native beautyberry (Callicarpa americana) fruit wraps all the way around the stem? Also, note the textured leaves.

So, how can you tell the difference? We are grateful that Senior Horticulturist, Elizabeth Fogel has some tips.

Elizabeth also explains that the fruit on native Callicarpa americana wraps all the way around the stem. On Callicarpa japonica the fruit is only on the top side of the stem and is absent on the underside on the non-native.

Lewis Ginter Botanical Garden’s Patrick Gravel, a gardener, also points out another key difference is on Callicarpa japonica the leaves are smooth not textured like the native version. So, if you look closely, you can tell the difference. 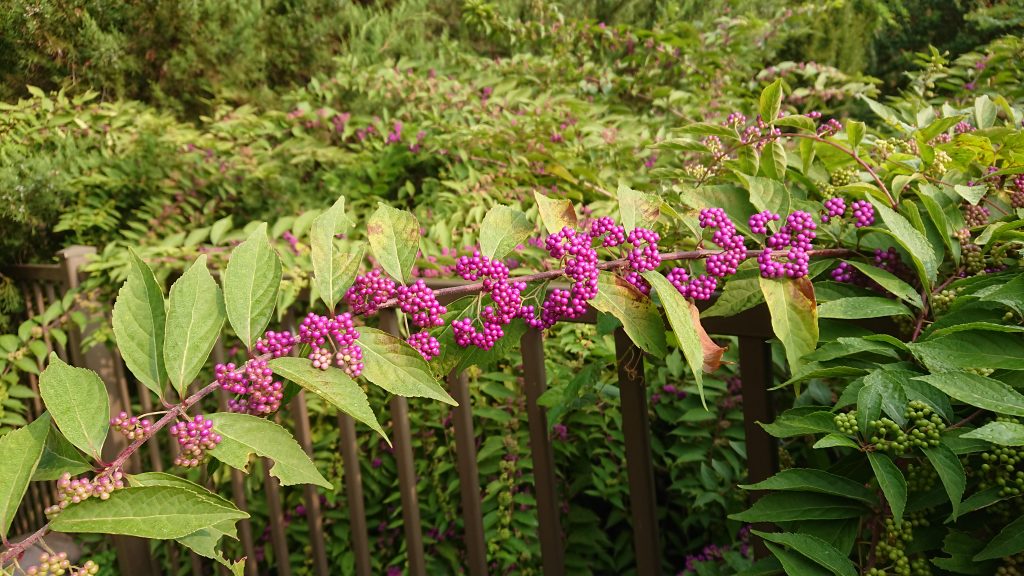 Non-native beautyberry (Callicarpa japonica) also has purple berries but they don’t wrap fully around the stem and the fruit is further from the stem. Notice how the leaves appear smoother than the native version.

In addition, there is a really beautiful white version of beautyberry called Callicarpa americana var. lactea that visitors can see in the Morton Native Plant Garden. 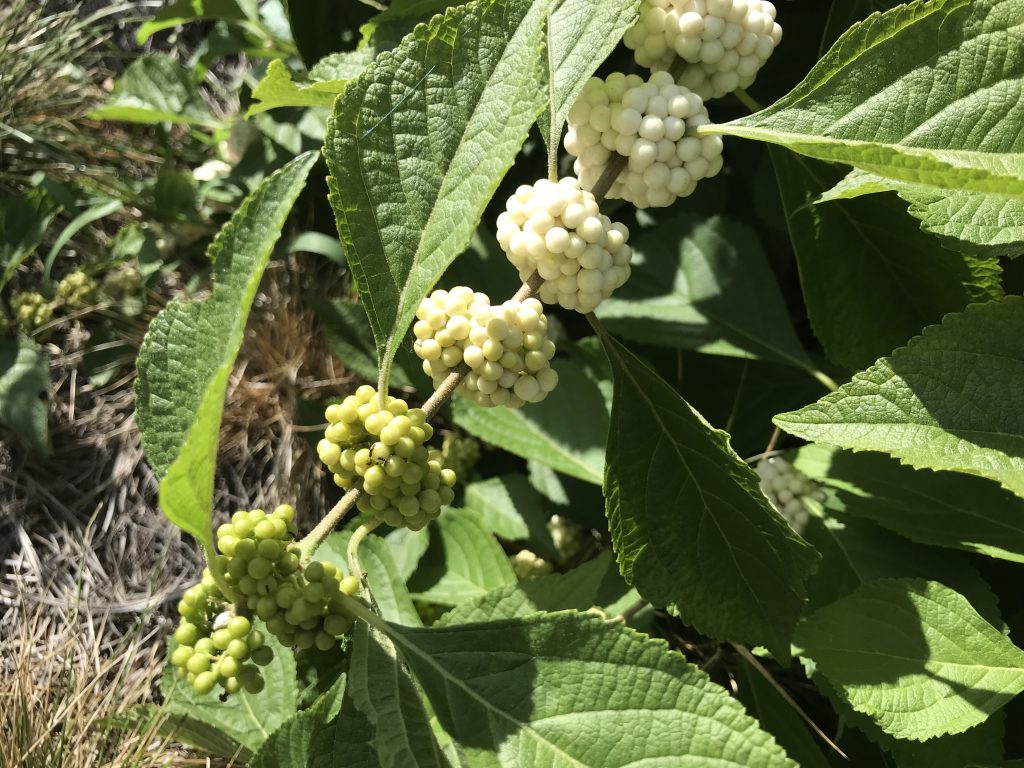 One of the other questions we get asked is, “Are beautyberries edible?” Often visitors have heard you can make jam or jelly with the fruit. While I’ve never tried it, and I’ve heard the berries are very sour or astringent, I understand that it is possible.  (Disclaimer: never eat a plant in the wild unless you are absolutely sure what it is).  You would not want to eat beautyberries raw or right off the plant.  Interestingly, while the native American beautyberry is used for jam or jelly, the non-native versions like Callicarpa japonica, Callicarpa rubella, Callicarpa cathayana and Callicarpa dichotoma traditionally are not. 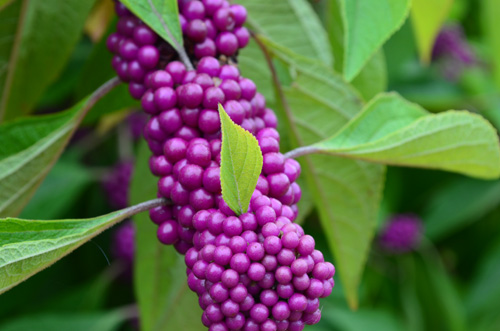 So, what do you think? Native or non-native? If you guessed native, you are right! Look how the drupes (fruit) wraps all the way around the stem. This looks like a very robust specimen — look at all those berries!

Another question we get is, “If birds eat beautyberry then why do I see them in winter?” The answer is that these berries persist because they are actually not the first choice food of most birds. They are, however, a great food source later in the season when more preferred food is gone.  Sort of like Brussels sprouts in an elementary cafeteria on pizza day.

Beautyberries bloom on new wood. And as you probably guessed those blooms are what turns into the berries! This means the ideal time to prune them is in winter after the berries have been eaten or fall off.

If you’ve never seen a beautyberry plant in person, I would recommend finding some. You can find native beautyberry in the woods of Virginia or, if you visit us here at Lewis Ginter Botanical Garden, you can see both the native and non-native varieties.  Viewed now, in fall, you’ll see them covered in vibrant green leaves backing the signature purple berries. Later in winter when the leaves drop, the purple berries really pop with a pronounced presence on the naked branches. Beautyberry is resilient and cold-hardy through freezing, and snow, so the colorful berries can be enjoyed well into the winter months.