It’s funny what memories people attach to when they visit the Garden.  For some, a visit to the Garden is all about the plants. For others, it’s about education or quiet meditation. Still others define a great visit by dining al fresco at the Robins Tea House or by playing hide and seek in Diamonds in the Rough, the giant stick sculpture installation in Anderson Meadow. Some say that a butterfly landing on them as they get up close and personal with the butterflies in the Conservatory is what they remember most from their visit.

Personally, I have great memories of  enjoying a wine tasting and live music at Flowers After 5.  The night I spent sleeping in the Children’s Garden Tree House during the the annual staff campout is something my whole family will never forget!

….And then there are the kids….  Some of them come to smell the flowers, others just want to touch them. Some come to enjoy Water Play or to build mud pies & learn about compost.   Many visitors — kids and adults alike — with an especially keen sense of whimsy and humor and come for all of those things, but also to see their favorite wallpaper. I know, its sounds strange. Especially since this particular wallpaper is located in the bathroom, but it’s a spot everyone has to visit sooner or later. And when they do, often it is with delight when they they see the wallpaper.

This particular wallpaper is of a monkey pulling another monkey’s tail and playing in the jungle. People LOVE it.  I mean they ADORE it! The images is repeated over and over — as the monkeys frolic through palm trees.  The wallpaper was installed in the Robins Visitor Center in 1999 when the building opened.  It’s been so popular, that for one reason or another some folks started taking pieces of it with them.  At first perhaps it was an irresistible corner just begging to be pulled by a child. Later perhaps it was  as a keepsake or because someone wanted to match the paper for their own decor.  But what it means for us now is that we have to replace it. For many years, our dedicated volunteers  tried to hand-paint the walls where pieces were missing or torn.  But it was hard to keep up with. And it couldn’t be replaced. 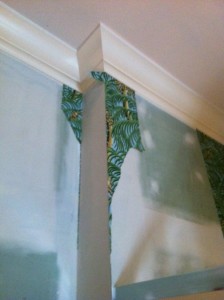 The beloved wallpaper coming down.

Yesterday, a crew started renovations to the bathrooms.  So many people asked for a sample of the paper as it was coming down, that the crew could barely work. In fact, when I walked in to the bathroom earlier today to take these photos, the first thing the contractor said to me was, “Yeah, you can have some!” I wasn’t even eyeing it!  But of course when he offered it to me, I couldn’t refuse. 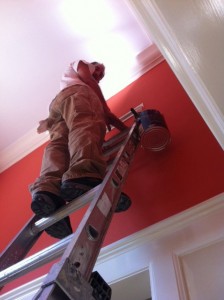 Patricia Crone, a Lewis Ginter Botanical Garden Visitor Services Associate who’s worked at the Garden both as a staffer and volunteer for the past 20 years says she often hears people from down the hall saying in excitement, “Oh monkeys!” as they open the bathroom door.  “I think we are going to miss them, ” she says with a bit of sadness.   And you know the Garden would replace the wallpaper with the same if we could — but they just don’t make it anymore.

Robin Gregson, another Visitor Services worker, say it’s not uncommon to hear people say, “I’ll meet you in the monkey bathroom!” And of course everyone knows what they mean.

Robin says she really likes the new style of the bathroom too.  “I stepped in the men’s room this morning and it looks great — bright & airy!”

Heather Pearce, Assistant  Manager of the Garden Shop and known for her impeccable taste, chose the new colors and wall paper for the bathrooms.

So, we are sorry to see it go, but as they say:  If nothing ever changed, there’d be no butterflies.

I suggested we salvage the monkey wallpaper since people were so in love with it.  We have a box of it just waiting. Any suggestions as to what we should do with it? Personally, I’m thinking ornaments for the 2013-2014 Holiday Tree at Dominion GardenFest of Lights. Theme: Tail-Pulling Monkeys of course! And we’ll be sure to do it up in lights too. I bet I can think of a few from our army of 600+ volunteers who would volunteer for the job of crafting it.