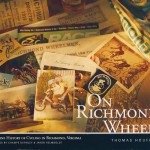 Two new Virginia-related books offer great choices for bike-lovers and plant-lovers on your gift lists.  Both are available in our Garden Shop.
On Richmond’s Wheel: A Timeline History of Cycling in Richmond, Virginia by Thomas Houff is a history of bicycling in Richmond and much more.  It will appeal to any Richmond history buff.  Richmond entered the cycling age sometime near 1876.  The big-wheeled bikes caused quite a stir and fortunately quickly gave way to the “safety” bike invented in 1885.  People were quick to see the convenience and speed of cycling over walking, and cycling offered a new social outlet.  It’s hard for us to imagine that bicycling was an act of social activism but for blacks and women, it was just that. H.G. Wells said that women’s cycling “… has done more to emancipate women than anything else in the world.”  Organized bicycling clubs became quite popular with well-to-do white men; black men formed their own clubs and had their own races since they were prohibited from participating in whites-only events.  Lewis Ginter created the Lakeside Wheel Club, along with about 125 of his peers from the Commonwealth and Westmoreland Clubs. The Wheel Club building and property was purchased by Grace Arents, Ginter’s niece, after his death.  She renamed the property Bloemendaal Farm and converted the Wheel Club to her home.  Ginter was not a cyclist so it seems odd that he would be instrumental in supporting cycling in Richmond.  However, Ginter was a very savvy businessman, and we learn from this book that he supported the national “Good Roads” movement, dedicated to improving the nation’s roadways.  Ginter had property to sell for home sites and people needed reliable roads to get back and forth from the city to his new Ginter Park development.  The League of American Wheelmen was instrumental in the good roads movement and used their influence to agitate on road improvements.  I guess you could say that, in biking parlance, Ginter “drafted” on the League’s momentum for road improvements.  On Richmond’s Wheel is full of interesting historical and social details plus plenty of photos.  The book costs $19.95 and is published by Thomas Houff. Paperback, 87 p., ISBN: 97809858381-0-2. 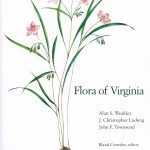 I am very excited that the Flora of Virginia is now available. We’ve been waiting since 1762 for an updated statewide flora. We must be grateful to all of the members of the Flora of Virginia Project for seeing this enormous project through to completion. The Flora includes 3,164 species; to be included a plant must be native to Virginia at the time of European contact or must meet the following criteria: can be found at least infrequently somewhere in Virginia, is known to be spreading and likely to become more common, and it is known to persist after cultivation or introduction. In addition to the full “Taxonomic Treatment” of each of the 3,164 species, the book includes lengthy background information in chapters called Plant Discovery and Documentation in Virginia, The Nature of Virginia Flora, and Learning the Virginia Flora: 50 Sites for Productive Field Botany. There are beautiful line drawings of many of the plants, color photos in the chapters, a glossary, a long list of references, and an index. Flora of Virginia can be purchased at the Garden Shop for $79.99; Garden members receive a 10 percent discount.  A portion of the proceeds from book sales help continue the educational mission of the Flora of Virginia Project.  Flora of Virginia  was authored by Alan S. Weakley, J. Christopher Ludwig, and John F. Townsend, edited by Bland Crowder, hardcover, 1554 p., BRIT Press, ISBN: 9781889878-38-6.

Both books can also be viewed in the Lora M. Robins Library.