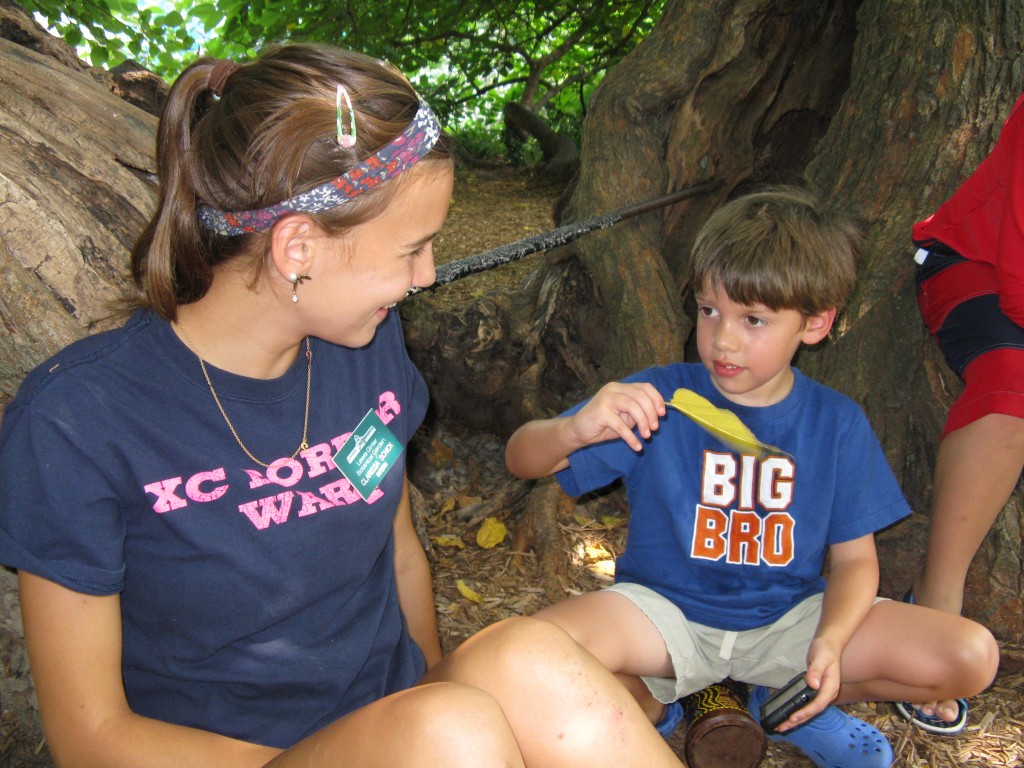 Ethan with Clarissa and a leaf.

When Loreen Hitch dropped off her kindergarten-age son Ethan for his first day of Green Adventures Camp at the Garden, little did she realize that she was setting off a chain of events that would lead to an amazing awakening and the liberation of a plucky little worm named “Wormy.” In fact, Loreen had initially been hesitant to enroll her son in the week-long summer camp at all. Ethan had been diagnosed with Sensory Processing Disorder and Aspergers syndrome, and because of these conditions he’d had difficulty behaving appropriately or interacting with other children in the past. She’d even been forced to pull him from other camps and activities because he’d been too disruptive. She hoped this time would be different mainly because this camp was different. In her words, “Ethan loves science. He is a maniac for it!” and so Loreen hoped the heavy science focus of the Green Adventures Camp would capture Ethan’s attention and perhaps even bring him out of his shell. Boy was she right! On his first day at the Camp, Loreen met with Garden staff to discuss Ethan’s special needs. This was also Ethan’s first meeting with Clarissa Schick – a university student volunteering as a camp counselor as part of the Garden’s Service Learning Program. Ethan connected with Clarissa immediately. Perhaps it was her gentle, caring nature, her silly sense of humor, or perhaps, as Loreen suggests, it was a bit of a “crush” on Ethan’s part, but whatever the reason, the duo soon became fast friends and Loreen’s initial fears and trepidation began to melt away. Garden educator Kristin Mullen and Clarissa worked to accommodate Ethan’s individual needs by adapting content and activities and encouraging him to take part in the Camp’s “Five Senses” themed activities. Ethan devoured the science content and because he was so engaged, he rarely misbehaved. The camp gave him a chance to get his hands dirty and his knees grubby. It was the perfect blend of physical stimulation and intellectual engagement. “It is so ‘hands-on’ and just the sort of camp experience I really wanted for our son.” Loreen said. “It was a pure joy to pick him up every day and have him come running to us enthusiastically babbling about whatever his experience was that day.” And if you ask Ethan about his favorite memory of the Camp, there isn’t a moment’s hesitation before he answers: “The Compost Pile!” On the second-last day of camp, everyone at the camp had a chance examine the rich, earthy contents of the Garden’s compost pile. Here they could find sow bugs, beetles, millipedes and worms. Lots and lots of worms. And, if they were so inclined, the children could even reach in and grab a handful. Ethan was so inclined. As Ethan and Clarissa picked through the treasure trove of earthy goodies, he identified the various inhabitants for her. And when he came upon a fat red worm, Ethan confidently introduced her to “Wormy.” When it came time to return the compost pile’s residents back to their home, one resident didn’t make the journey. Ethan had craftily tucked Wormy into a Dixie cup along with some dirt and a “stick to keep him company.” Wormy’s great escape was on! Ethan dutifully ported Wormy and his new Dixie-cup home from activity to activity during the day, and it wasn’t until the ride home that his mom finally learned the truth about the fugitive she was now transporting. When they got home, Wormy was eventually given a new home in the Hitch’s backyard and Ethan was given a memory he will keep forever.

Would you like to see more children like Ethan helped by visiting and participating in programs at the Children’s Garden?  Please join us for the Garden’s third annual Cheers to Art auction and fundraiser, on Thursday, March 21st. Tickets are $45 in advance and $50/person at the door. Or, if you’d like to help in another way, by donating art, or becoming a sponsor, you can email cheerstoart@lewisginter.org.   To view the art available for auction, please visit our Cheers to Art Facebook page.