Today was awesome!   About a hundred people participated in the celebration planting day this morning, including a group of 20  4- and 5-year-old students from New Directions Daycare.

It was great fun watching the children get in the dirt and plant cabbages, bell peppers, eggplant and tomatoes.  It comes so natural to children – they have no fear or anxiety over whether they are doing it in just the right way, its all about getting it done.   They worked with folks from the Virginia Master Gardener Program and volunteers who did a great job explaining to the children what they were planting and why.  I overheard one master gardener asking a group of children gathered in front of several tomato plants if they ate spaghetti, and did they put ketchup on their burgers?  When the kids all said yes, she explained that spaghetti sauce and ketchup were made from tomatoes – and the look on the kids’ faces was amazing when they started to make the connection between the plants in front of them, and the sauce that goes on their spaghetti!   They couldn’t wait to get those plants into the ground! 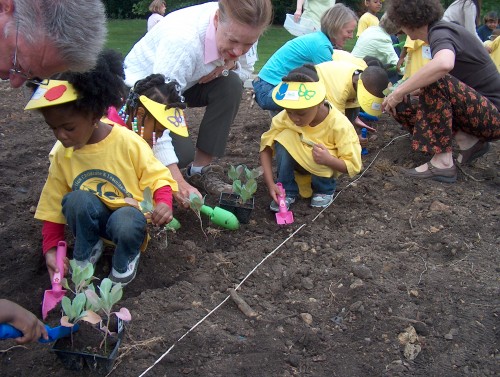 The kids get down in the dirt!

New Directions Daycare partners with FeedMore.  It was great for them to come out and give a helping hand with the planting so that the students had a chance to learn about growing food locally and giving back to the community.

In the opening presentation Fay Lohr, President/CEO of FeedMore (the umbrella organization for Central Virginia Foodbank and Meals on Wheels of Central Virginia) commented on some startling statistics;   FeedMore has distributed over 10.6 million pounds of food and grocery items in the last nine months.  The programs that they offer make sure that those in need, including children, the elderly and the homebound, will continue to receive healthy food when  they need it most.

A few more facts from FeedMore:

– of the 36 localities they serve, 25 localities have childhood poverty levels above the state average

– the number of meals they prepare and deliver per day has risen from 3,000 last summer to 3,800 anticipated this summer; a 27% increase.

The staff and volunteers at Lewis Ginter are thrilled to be working on this vegetable garden, and the chance to help fight hunger in our community.  For me, volunteering on this project is such a great opportunity – I get to do some gardening which I enjoy, I get to learn lots of new stuff about growing vegetables which I have never really done before, but best of all I get to contribute to my local community.   If you would like to volunteer at Lewis Ginter then I encourage you to sign up!

Today we planted about 15 rows of plants, with each row having about 10-15 plants.  We had two rows of cabbage seedlings, 5 rows of assorted bell peppers, 1 row of eggplant, and lots of rows of tomatoes.  Most of the plants take 70-80 days to mature, but one variety of tomatoes – Early Girl Hybrid – matures in about 50 days.  Just a month and a half before we can reap some rewards!  Additional plants and seeds will be planted in the next few days, and throughout the season. 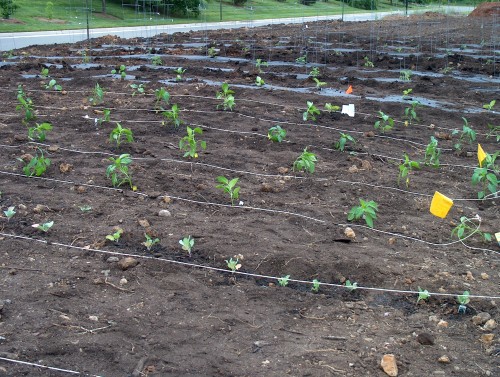 Attendees at the planting day celebration were each given a free packet of seeds.  Lewis Ginter Botanical Garden is encouraging people to plant an extra row in their gardens at home and donate the produce to FeedMore.  I got a packet of squash seeds.  I’m not sure that I have space in a sunny spot in my garden at home, but I know one of my neighbors’ does!

If you told yourself that this year you would plant a garden, but haven’t got around to it yet, then I challenge you to go out and do it this weekend! It’s not too late!