The Kroger Community Kitchen Garden (KCKG) at Lewis Ginter Botanical Garden is one of many of our direct connections to the community. Since its inception in 2009, the KCKG has served as a learning laboratory for home vegetable gardening and sustainable horticulture, while producing over 71,763 pounds of fresh vegetables and fruit for food assistance programs in the Richmond region. Many community volunteers, including teams from various corporate and nonprofit organizations, have donated their time and hard work to the cause. However, after years of production, the KCKG needed revitalizing. Southern Blight had taken part of the garden known as the “Back 40” offline a few years ago, and we were ready to bring it back into full production mode. Meanwhile, the Demonstration Garden has been suffering from soil-borne nematodes. Thanks to the generosity of two of our community partners, the Altria Companies Employee Community Fund and Genworth, the Community Kitchen Garden will receive some much-needed upgrades. 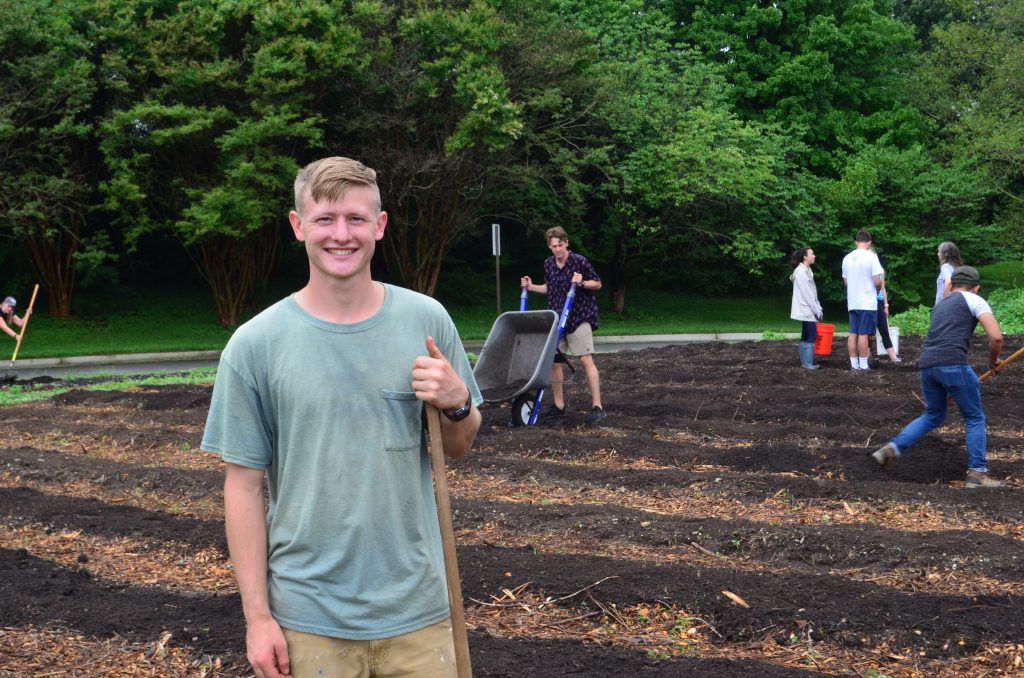 Renovating the “Back 40” Garden

Lewis Ginter Botanical Garden is working to bring the “Back 40”  back into production after several years of allowing that ground to lay fallow to recover from Southern Blight. The 5,600 square feet of additional land will enable us to increase our production as early as this fall, and just in time, because the Demonstration Garden of the KCKG behind the Conservatory has nematodes and sections have been taken offline so that we can reduce their numbers with organic treatments like solarization and frequent bare tilling.  To prepare the “Back 40” for farming, Sustainable Agriculture Gardener Conor Collins, has removed existing vegetation, broken up the soil with deep tilling, installed drip irrigation, mulched new pathways and more. Collins, whose newly created position was made possible by the Altria grant, says the “Back 40” will be used to grow lots of leafy greens like kale, root crops like beets and turnips, as well as cover crops like ryegrass and oilseed radish.

“We’ll be growing beets, greens as well, and other varieties of cabbage and root vegetables like carrots would probably do well in the ‘Back 40,'” says Collins. 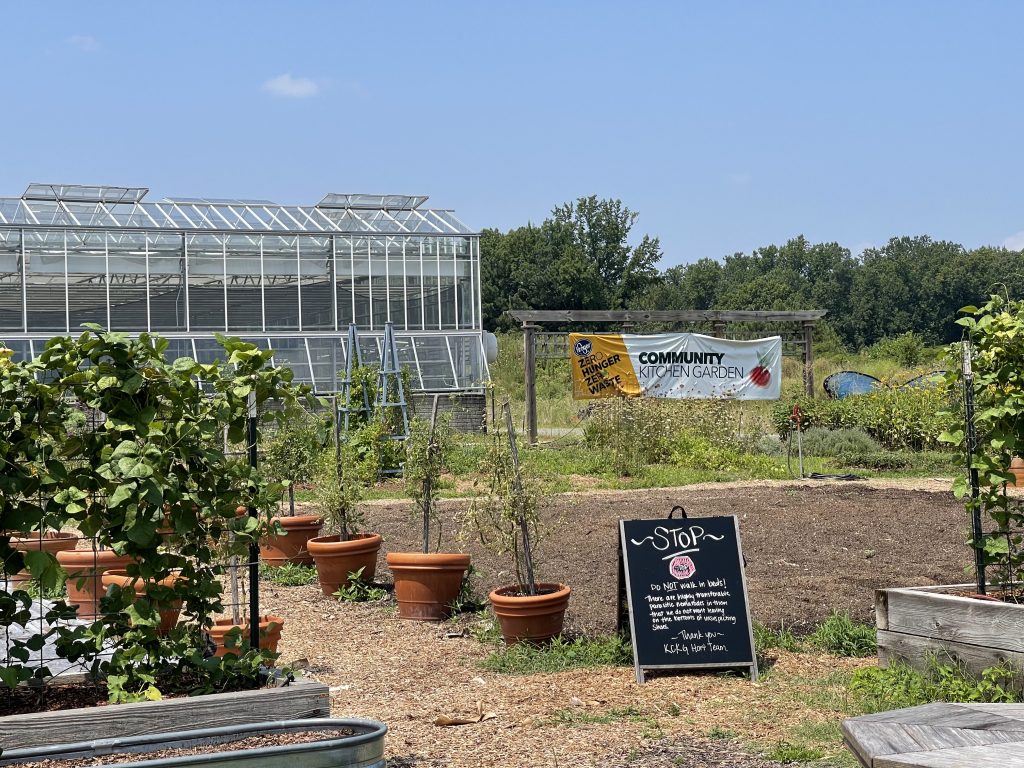 Nematodes have been a problem for the Community Garden for several years. They are microscopic and can spread easily.

Controlling the Nematodes in the Demonstration Garden

In the Demonstration Garden or the front part of the KCKG, just behind the Conservatory, we are working to control root-knot nematodes, microscopic parasites that attack most crops, including tomatoes, squash and beans to name a few, by entering their root systems. Root-knot nematodes spread easily due to the nature of their small size. Collins explains that even a chunk of dirt on the bottom of your shoe can carry lots of nematodes to other locations. Therefore, isolating them is the best way to control the infestation.

“Isolation is probably the largest part of control,” says Collins. “Proper crop rotation, tilling and sterilizing the soil through certain methods like solarization are all ways to control nematodes.”

This year, in the Demonstration Garden, our gardeners have replaced nematode-infested soil in the container gardens, rotated crops, solarized the soil and have grown nematode-resistant varieties of vegetables. 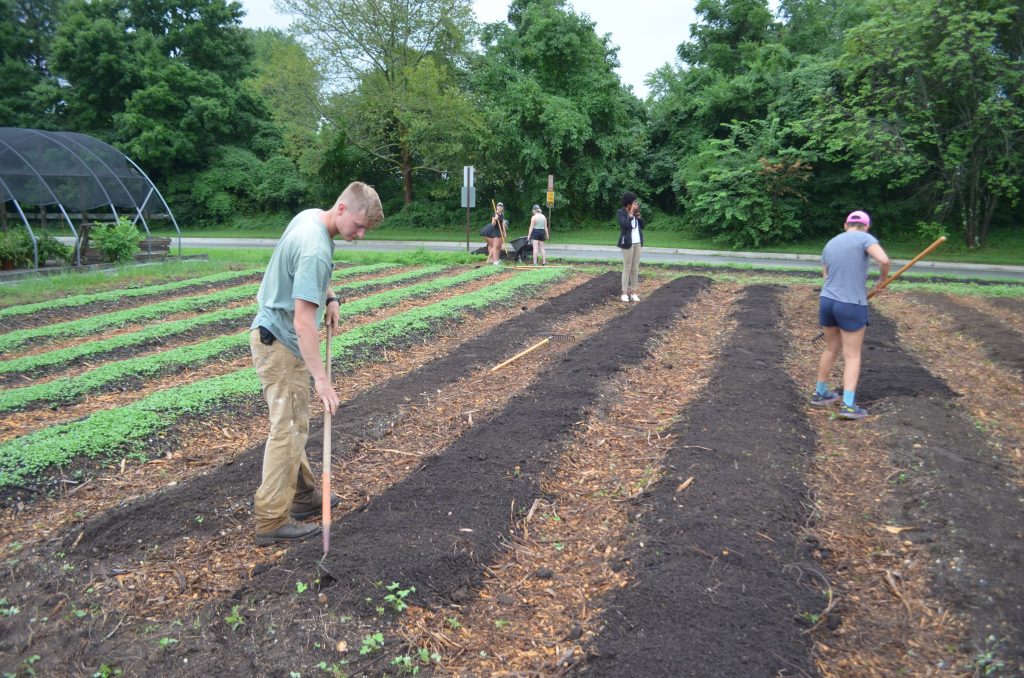 We are very fortunate to have all of this work headed up by Conor Collins, our new Sustainable Agriculture Gardener. Collins grew up helping out at Victory Farms, a CSA and farm stand that his parents operated for many years in Hanover, Henrico and Richmond. He explains that while growing up, he did plenty of gardening and farming work for Victory Farms.

“I did a range of jobs for them, including greenhouse work, sprouting, planting, as well as harvesting,” says Collins. In addition, Collins says that he also has experience in organizing and delivering the harvested crops to different markets and restaurants. 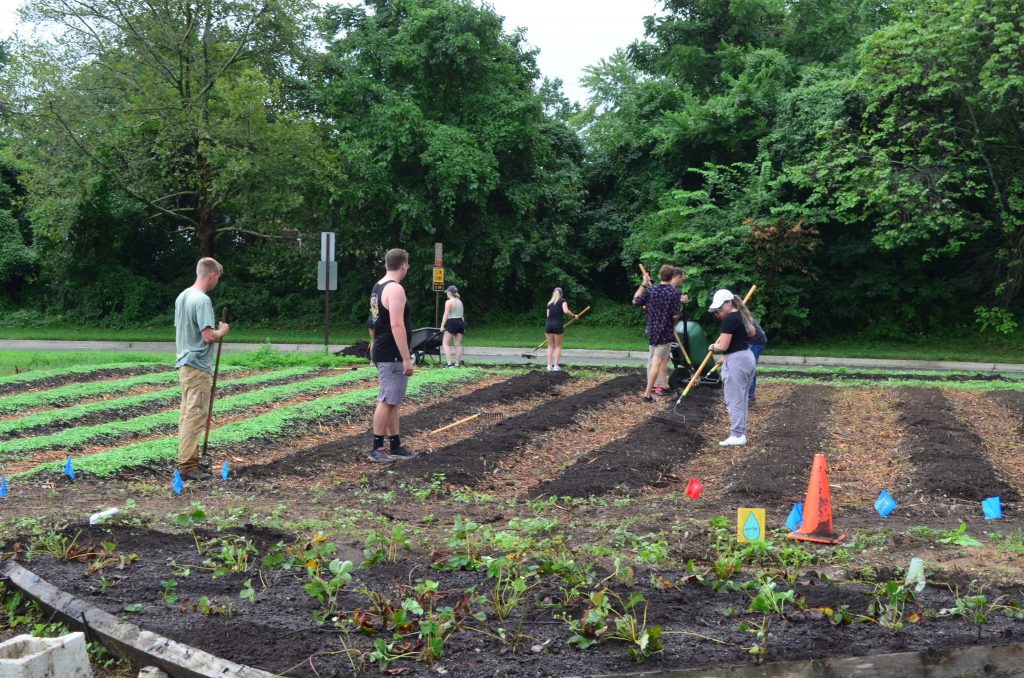 Conor overseeing the work of University of Richmond Law School students during their service day at the Kroger Community Kitchen Garden. The rows of green on the left are oilseed radish, a cover crop.

“For my day-to-day, I do a lot of maintenance and preparation for planting,” Collins says of his work at Lewis Ginter. If you happen to see Collins while he is working at the Kroger Community Kitchen Garden, please drop by and say hello!

Jun Lee is currently a junior at Virginia Commonwealth University. As a student of the Robertson School of Mass Communications, he is majoring in online journalism with a minor in history. He finds nature quite calming and loves to quench his adventuring spirit by exploring.