by Janine Butler
By Janine Butler, Garden Volunteer, Lewis Ginter Botanical Garden
Do you know what I love about this volunteer gig? Every time I go to the garden I learn something new – this week was all about tomatoes (and yes, I say tom-ah-toe, not tom-ate-er).
Tom Brinda, Assistant Executive Director of Horticulture at Lewis Ginter asked the volunteers to ‘sucker’ some of the tomato plants, which means removing all the smaller shoots (or suckers) from the plant and leaving just the main stem. The sucker grows in the axis between the stem and a branch. It was scary at first removing all the suckers as it felt like we were ravaging the plants that had worked so hard to grow.  But under the watchful eye of Jody, a master gardener and Lewis Ginter volunteer, we all got the hang of it fairly quickly.  Removing the suckers will allow the plant to direct all its energy into the main stem; this will produce less fruit, however the fruit should be much bigger in size. The plants that don’t get suckered will produce more fruit overall, but the size of the fruit will be smaller. This hopefully allows us to get the best of both worlds – quantity and quality!
The first photo is a ‘before’ shot of a tomato plant, and the second is after we have thinned it out: 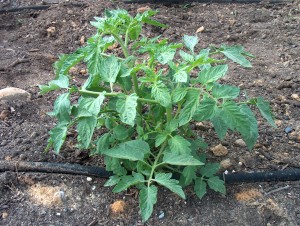 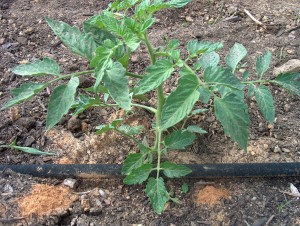 We had about ten volunteers this week, which was great, and we managed to get quite a lot done in a short amount of time. As well as the ‘tomato suckering’, we also did some weeding and of course, we put down some more mulch! Regular readers of this blog will know that we have shoveled tons of mulch! We move a pile of it, and then the following week there is another pile that has been delivered, ready to be moved again!

We also planted more zucchini seeds, in the same manner that we planted the squash seeds last month – by making rows of small hills of compost, cover with soil, then roll over the black plastic barrier, cut X holes in the plastic and put in about 4-6 seeds. These seeds should germinate in about 10-15 days.  We are also starting to see some veggies growing – an eggplant, green pepper and tomatoes. There’s not too many of them right now, but hopefully soon we will have enough to harvest and then we can take it down to the Central Virgina Foodbank where it will be put to good use. 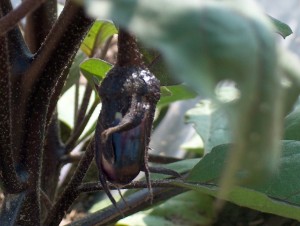 Last week I also mentioned the mystery bug that is attacking some of the eggplants. One reader helpfully suggested that it might be a flea beetle, but I’m not sure (although I am definitely no expert). I managed to get a photo so hopefully someone out there can confirm what it is! 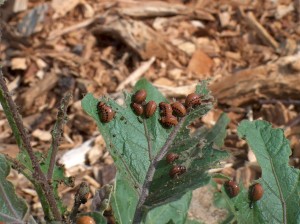 I would like to thank all the volunteers this week for their hard work, and again invite anyone to come by and help out. We work in the garden on Saturday and Monday 9am-12pm; it’s great fun and we would love to see you!