For those you out there that consider yourselves lovers of craft beer and beautiful gardens, you might already be aware of a fun new partnership that started in 2015. The craft beer industry is quickly becoming an integral part of the local  and tourist economies in Richmond, and across the state of Virginia. So the partnership between Lewis Ginter Botanical Garden and Center of the Universe Brewing and Piedmont Hops, LLC  just makes sense and might be just the thing to bring out the beer or garden lover in anyone! 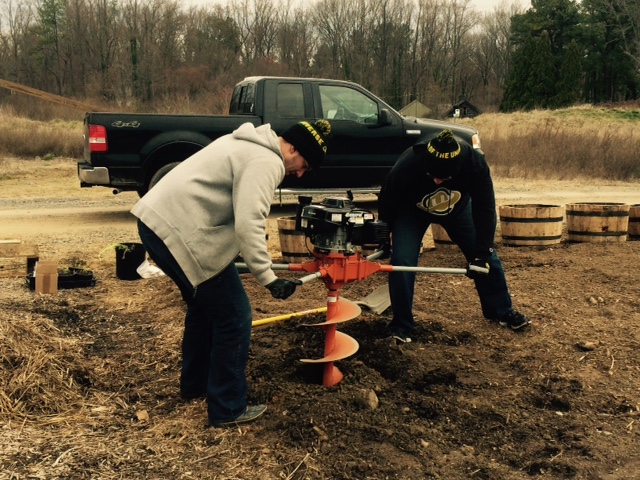 COTU founders, Chris and Phillip Ray, use an auger to make the hole for the 4×4 posts.

It all began in April, when some really nice guys from COTU visited the Community Kitchen Garden and brought 20 repurposed bourbon barrels and a bag of root cuttings, or rhizomes. We planted the ‘Cascade’ and ‘Columbus’ hop rhizomes in the bourbon barrels to contain the vigorous plants, which have the tendency to spread.  And sometimes, on a warm day, the faint scent of sweet bourbon fills the air around the hops.

Once they emerged, the hop bines began to climb on thick pieces of twine tied to a guy wire in a tent formation; the wire is strung between two tall 4 x 4 posts.  You might think the word bine is a typo, but hops are technically a bine instead of a vine. The distinction is that bines climb by growing in a helix around a support, often with the help of downward pointing bristles. Vines, on the other hand, use suckers or tendrils to climb a support. 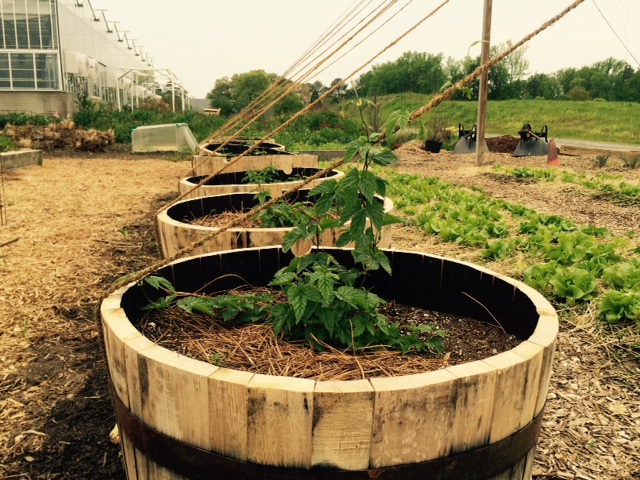 The hops put out a fair amount of vegetative growth this season, but during the first year most of the energy being produced is going toward root development. However, mature hops can grow up to 25 feet in a single season! In the future, when our hops grow to this length and begin to shade out the planting beds underneath, we’ll experiment with growing crops like lettuce throughout the summer in the partially shaded beds.

And although our plants didn’t grow to be 25 feet this season, we were still able to make our first hop harvest this past Tuesday. With the help of Lewis Ginter Botanical Garden volunteers Terry Lautzenheiser and Hannah Beck, we harvested 2 ½ quart size bags of ‘Cascade’ hops. We knew some of the hop cones were ready for harvest based on the papery feel, slight browning at the tips, golden yellow lupulin glands (which contain the acids and oils important for brewing beer), and the strong hop aroma. These hops will not be donated to Feedmore like the rest of the produce grown in the Community Kitchen Garden, but instead used as a tool to teach visitors about a plant with ornamental value that could become in important cash crop for our state in the future. 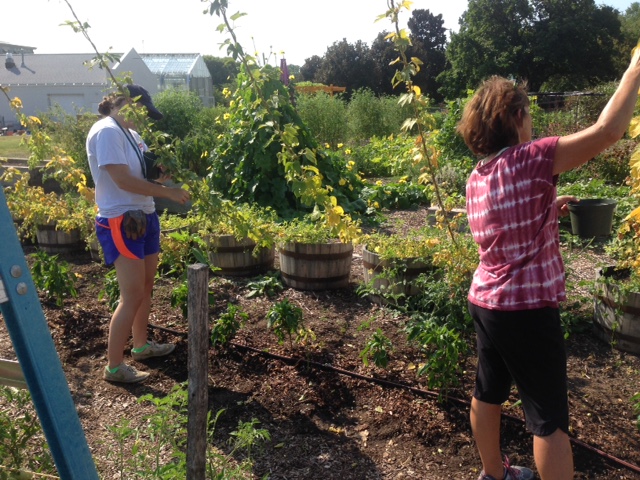 Hops are the female flowers harvested from herbaceous bines of the perennial hop species Humulus lupulus.  They are used to add bitterness and enhance the flavor and aroma of beer, but they also act as a natural preservative and help to stabilize the beer. The amount of hops used when brewing varies depending on the style of beer and the recipe. If you love a good IPA (India Pale Ale) as much as I do, you have an idea of the bitter, sometimes citrusy, flavor that hops can bring to a beer. In fact, the reason IPAs have such a strong hoppy flavor is because the British used tons hops to help preserve the beer on the hot, 6-month-long  trip to India.  I’m not sure what style of beer the COTU team has in mind for our hops, but I’ll be in the front of the line when it comes time to taste it! 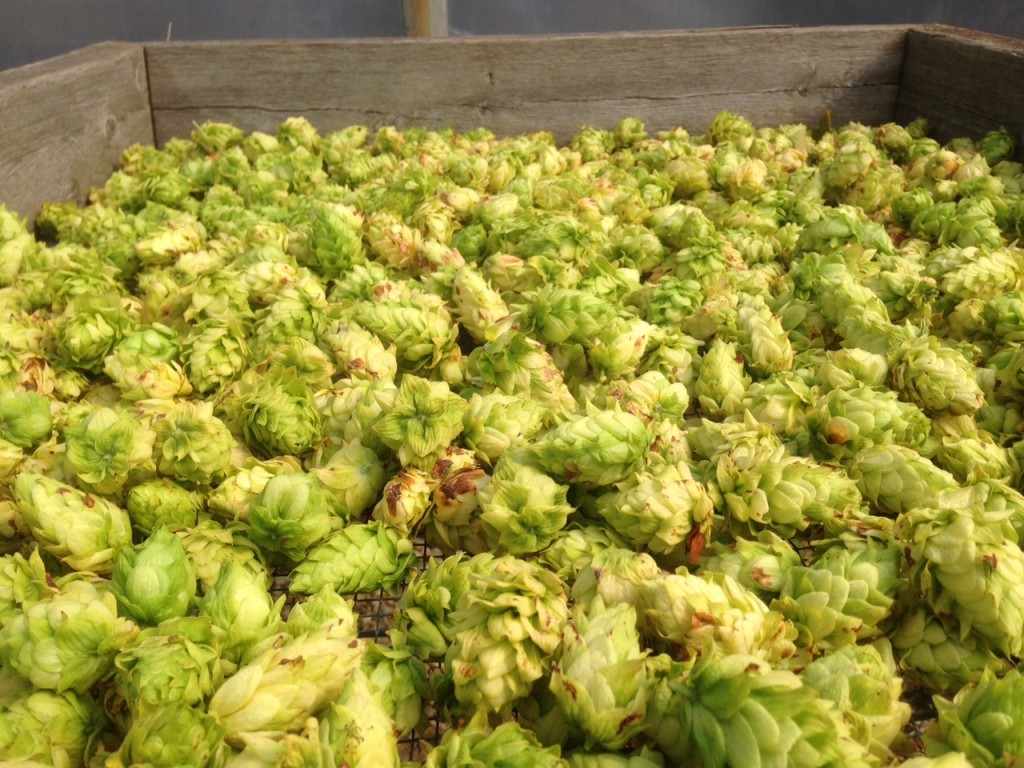 The first harvest of ‘Cascade’ hops.