In what seems like one of the most unpredictable turn of events in the food movement, DC public schools are leading the way in kicking sugary milk and cereals off of their menu. While it seems like a no-brainer for health reasons, it is a bold move.  I have a huge amount of respect for DC schools and their Healthy Schools Act, passed by the council earlier this year and funded in the 2011 budget.  For many of DC’s inner city children, the free (or reduced cost) meals they get at school are the best (and sometimes) only nutrition they get — so it’s important.  According to the Healthy Schools Act, DC has the highest rate of adolescent obesity in the nation and  in some neighborhoods, half of the children are overweight or obese. 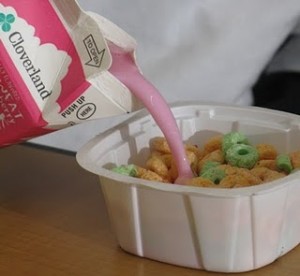 With obesity, diabetes, and other health issues on the rise it seems like DC may be just the first of many school systems who will eventually do the same.    For kids, having to choose sugary milk or that is the best nutritional choice is too big a decision with too much freedom.  As parents we would be considered irresponsible if we let our children watch whatever TV shows and movies they want without regards to the content. Why would we do the same with food?

One of the best things about DC Public Schools Healthy Schools Act is that it is clearly spelled out that this program will establish a school gardens program and competitive grants in order to both educate kids and make eating vegetables more appealing.  My elementary-school-aged kids, who are pesca-vegatarian (ie we are vegetarian but we eat fish), and who don’t eat HFCS, food coloring or artificial sweeteners, LOVE vegetables. But I would never serve them processed, canned, trucked-in, or unripe fruits and vegetables that are often served in the school cafeteria. To be honest, I wouldn’t want to eat them either. I know first-hand — in order to get kids to like veggies, you have to give them the best: fresh, local, in-season, organic produce.  And, you have to give them choices. One of my children likes spinach, peppers & cucumbers, and berries — the other doesn’t, but she loves carrots & peas –which the first one won’t eat.  They both pretty much love any other vegetable they come across as long as they know it is fresh and grown locally, without pesticides.

Plus, nutritionally the canned green beans they serve at schools pale in comparison to the just picked fresh raw green beans that my kids are eating in their lunch.  How silly is it that in our culture,  my children are teased because they think peas or spinach are yummy! How strange that my child’s teacher asks if he has a medical problem becuase I won’t let him eat petroleum-based food dyes typically found in many children’s foods — like strawberry milk or Froot Loops.

Blogger, and former Post Reporter, Ed Bruske, who scooped local media to make the announcement, has lots of other great commentary on his blog. If you care about these issues, take the time to read it, you’ll be glad you did.

Here at Lewis Ginter Botanical Garden, we know how important it is to have good nutrition — with plenty of locally grown vegetables  — even if you can’t find the time to garden or shop at the local farmer’s market.   That is why we started the Community Kitchen Garden with the help of the Community Foundation. Our goal (and we nearly met it last year) is to grow 10,000 lbs of fresh local vegetables for the areas neediest families — those that depend on the Central Virginia FoodBank, Meals on Wheels and partnering daycare organizations that provide food to low income citizens and families.  And so far, it seems to be working.

Back in DC,  The Washington Post‘s Mike DeBonis points out that much of the hard work for DCPS is yet to come:

And, he’s got a point. But if you ask me, getting the freshest local food and training the staff not to overcook it — but to let its fresh flavor stand on its own is half the battle.

And,this move, coupled with Michelle Obama’s Let’s Move campaign and her school garden initiative along with the White House Garden gives me hope.

Meanwhile, here in Richmond, not only are we incredibly lucky to have the great partnering organizations  in the Community Kitchen Garden project but also we have urban garden advocate Tricycle Gardens. Together with passionate parents at local elementary schools, and organizations like Farms to Schools, there is no where to go but up in our children’s nutrition.  And when I hear whispers at my children’s elementary school that the parents are going to rally, and get a garden planted and get a grant for a salad bar to be built to serve the fresh local veggies that the kids will grow themselves. I don’t doubt for a second that they’ll do it — because times are changing.