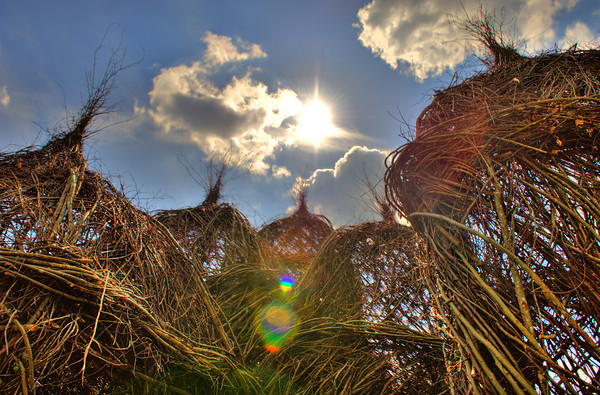 The completed sculpture: Diamonds in the Rough. Photo by Don Williamson

Note: Over the past 3 weeks, we have brought you updates on the progress of the Patrick Dougherty stick sculpture installation at Lewis Ginter Botanical Garden. The work, entitled Diamonds in the Rough, is now complete!   The sculpture will be part of the Garden’s landscape as long as Nature allows, so look forward to enjoying it with seasonal changes (and even lighted at GardenFest!)

Patrick said that in building the stick sculpture, we gave “a full measure” of our support and that it was an exceptional team effort. I couldn’t agree more. On Saturday, we had a turn-out of new volunteers, as well as veterans, who had simply learned of our need and wanted to be part of the final push to completion of the sculpture project. The site reminded me of a beehive, with everyone performing a crucial task, and the final result was a stunning example of community. 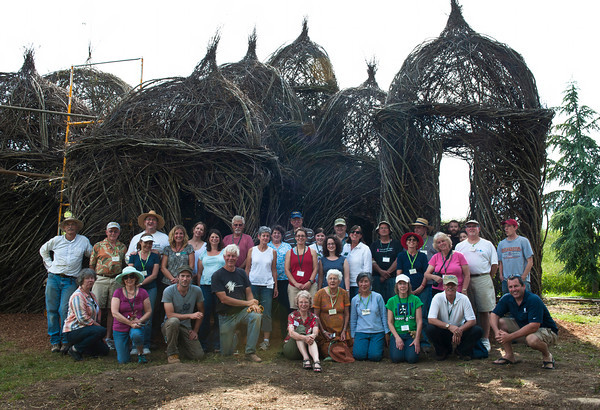 Volunteers who worked on the stick sculpture along with Patrick Dougherty and Andy Lynch. Photo by Don Williamson

Domes were finished by daring volunteers working up high, wall surfaces were embellished with more sticks, smoothed and groomed by the talented “finishers.” Baling twine that had bound together structural supports was clipped away, leaving only a network of sticks to hold the 6 tons of saplings together. The “strippers” gleaned all the usable material, and every stick was considered for its potential contribution.

At 4 p.m. Saturday, we raised a toast to this special group effort, and our humble volunteer tent was transformed into a pretty spiffy catered event. It was clear from the sentiments shared that everyone felt like this project was a once-in-a-lifetime experience, and it was a privilege to work with a man whose genuine, generous nature was as authentic as his sculpture was solid and strong.

On Sunday morning, Patrick and Andy Lynch arrived early and were soon joined by stalwarts who wanted to help ready the site for the Spring Fling.   Andy sent me a photo of the sculpture, sans scaffolding, a few minutes before 9 a.m., and when I arrived, the place was already bustling, with Patrick pointing out places to “doll up.” More mulch was laid, scaffolding was dismantled, tools were organized under the big tent, the site was cleaned and tidied, and Patrick left his teeth marks on what he deemed “the last stick.” He placed it in a front doorway and pronounced the project finished.

The Sunday crew did a walk-about of the site, as a visitor might, and marveled at the varying angles and forms, and the way our perception of the sculpture changes from differing vantage points. We even trekked along the crest of the Anderson Meadow hillside to view it from above. As mockingbirds perched at the highest points, Patrick joked that we had created a “dome-itory.” 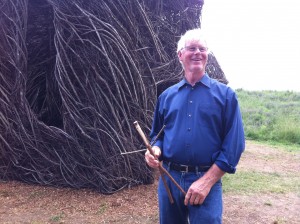 The Spring Fling was a lively congregation of guests of all ages, and the Richmond Indigenous Gourd Orchestra invited everyone to join in a parade to the Meadow. Patrick and Andy, accompanied by the GardenKeeper, led the way, and children with rhythm sticks kept pace to a beat set by the RIGO. Once at the Anderson Meadow, the band led a back and forth drum beat, with children following the rhythm and responding with a final drumstick roll. The Garden’s Executive Director, Frank Robinson, thanked Patrick and Andy for leading this special project, we presented Patrick with a souvenir carved Stickman, and finally Patrick took his turn addressing the crowd.

“This sculpture is built of basic diamond shapes, a new direction for me. I couldn’t name this “Diamonds Are Forever,” because these diamonds will only be around for maybe two years, so I’ve decided to name the sculpture “Diamonds in the Rough.” Sculptors create work so it will be enjoyed, so I invite everyone to come on in!” And with that, kids scampered in, around, and through, followed by their grown-ups and lots of eager admirers.

It has been my privilege to work with the many volunteers and staff who stepped forward to contribute to this project. What we’ve accomplished has added a new dimension to the Garden’s guest experience, and the impact will be lasting in ways we will all enjoy witnessing. And for each of us on a personal level, we’ve grown and been enriched beyond measure — I’m sure you agree!

Randee Humphrey, the Garden’s Director of Education, heads up a team of accomplished educators and program developers who design public, school, and special audience programs, educational exhibits and interpretation, and community engagement initiatives and partnerships. She loves how Beautiful RVA serves as a natural extension of the Garden’s heartfelt mission, as well as her own mission to live fully, be present, and serve others.