Down But Not Out

The post-Irene scene at the Lewis Ginter Community Kitchen Garden was a little disheartening at first, but that was before two volunteers from Luck Stone showed up. Sort of like a boxer after a bad first round getting a jolt of energy from the fans, we pulled ourselves up by our boot laces and started getting down to business.

Joy Cook & Roger Levesque, representing Luck Stone Corporation – one of the largest, family-owned and operated aggregates companies in the U.S, showed up undismayed and ready to work. We first harvested what we could – and for the first time this season the group of tomatoes allocated to the compost heap exceeded the count of tomatoes we crated for the Community Kitchen. Joy & Roger then moved to the next most important task, beginning to restore the vines to a vertical position. By the end of the morning work session there was a noticeable and critical improvement. 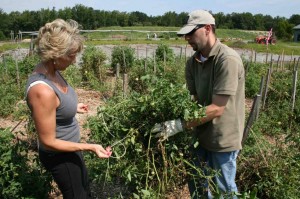 Joy Cook & Roger Levesque rassle the wind-blown tomato vines back onto the stakes. 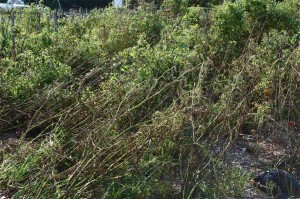 It's a little hard to make out what's going on in this photo - but that's what chaos looks like. The section of tomatoes using cages was the hardest hit, being taller and more tightly grouped. 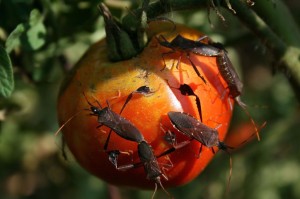 Leaf-Footed Bugs having a post-hurricane party on the Champion (tm) VFNT tomatoes.