All dogs must be leashed and current on rabies vaccinations. Please Note: We welcome dogs in the Robins Visitor Center and Conservatory, but ask that they not enter the Kelly Education Center building. Please read our rules and guidelines for visiting Lewis Ginter Botanical Garden with dogs.

The event is rain or shine; no refunds. Cost is $14 adults; $11 senior citizens (65+); $8 children age 3-12; free for children under 3 and members. Included is the exhibition M&T Bank RESTORE: The Healing Power of Nature.

With more than 50 acres, guests can socially distance themselves while exploring the gardens. Instead of one band at one location, the performers are splitting into soloists or duos in two locations, allowing for social distancing and providing background music for evening strolls and dining.

Guests are invited to bring their own blankets and chairs. Food is not allowed to be brought into the Garden, but the Tea House is open for in person dining or online ordering. The menu includes sandwiches, salads, snacks, desserts, drinks, and kids’ meals, as well as “Family Bistro Boxes”.  Beer, wine and hard seltzers will also be available for purchase in several spots throughout the Garden. 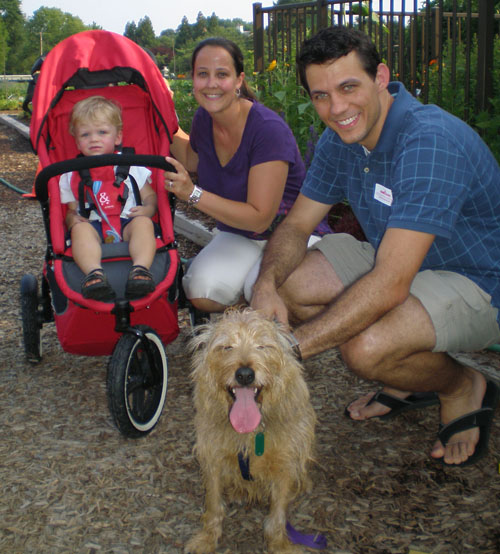 Please be aware this can be a stressful event for some dogs. Families planning to attend on this night should monitor children closely.

BEFORE YOU VISIT WITH YOUR DOG

Before attending Fidos after Five with your dog, it’s important to understand what your dog tolerates and will enjoy. Ask yourself:

-All dogs must have a current rabies vaccine.
-Retractable leashes are not permitted. Flat leashes will be available to borrow from the Richmond SPCA’s table in the Robins Visitor Center.

WHILE YOU ARE HERE WITH YOUR DOG

·         An adult must maintain control of the dog’s leash at all times.
·         Please ask before approaching or allowing your dog to approach an unfamiliar dog.
·         All dogs must be well-behaved; the Garden reserves the right to determine whether an owner and pet may be asked to leave, based on guest safety.

Please Note: We welcome dogs in the Robins Visitor Center and Conservatory, but ask that they not enter the Kelly Education Center building.

JUNE 10 (Fidos Night)
Bloemendaal House – Abram’s Bridge a band of brothers performing all of The Boss’s biggest hits, live staples and deep cuts! A tribute to the one and only Bruce Springsteen and the E Street Band!”

JUNE 24 (Fidos Night)
Bloemendaal House – Dead Letter Officers – born through an undying love of the jangle, Richmond’s R.E.M. merchants, the Dead Letter Officers, focus on early R.E.M. music from the early to late 1980s! Waking at the dawn of the college rock movement, DLO recreates the early 1980’s energy and songcraft of R.E.M. that became the soundtrack to countless college road trips and all-night dance parties throughout the South. Though they would later become the biggest band in the world for a time, at their beginning, R.E.M. was an intelligent, rocking bar band with rollicking songs and presence. DLO brings to life R.E.M.’s early sets in a live setting, recreating the IRS – era recordings with tireless enthusiasm. DLO creates a musical cacophony that harkens back to a simpler, more exciting time.

Luck Garden – Haze & Dacey are a Richmond-based folk-pop and roots-rock acoustic duo. They play and sing original music and cover songs, delighting audiences throughout Virginia, as well as in states ranging from North Carolina to Maine.  Haze recently assembled a full band to record a collection of her songs for their latest album, “Letters from Gilead,” recorded in early 2021.  The duo performs several of these and other original songs, along with covers ranging from Patty Griffin to Joni Mitchell to the Monkees to the Ramones.

JULY 8 (Fido’s Night)
Bloemendaal House – E3, featuring members of the band Everything, is a uniquely entertaining band that is creating a buzz at every event they play– from corporate cocktails to weddings, to big stage blowouts. And yes, their song “Who Got the Hooch” was a top 10 radio hit and showcased in Adam Sandler’s movie “The Waterboy”. Putting a new spin on cover bands, E3 plays electrifying versions of the songs you know and love. Their extensive song catalog covers it all; classic R&B, rock, reggae, funk, the 80s, 90s, and even today’s chart-toppers – from Louis Armstrong to Led Zeppelin, from Johnny Cash to The Cure to Coolio.

Luck Garden – Luke Bobbitt has played all around central Va for 12+ years in both bands and as a solo artist. He brings his Springsteen-esqe gritty, authentic storytelling voice to familiar songs ranging from classic rock, pop, country, Americana and his own songwriting. His former guitarist described him in the mold of “Modernized heartland rock with a stonesy swagger.” Luke shares that he always tries to keep his audience engaged with the songs they want to hear and with delightful surprises. He also plays the role of The Boss in the Tribute Springsteen Band called Abrams Bridge.

JULY 22 (Fidos Night)
Bloemendaal House –  Jackass Flats an ultra-talented Virginia quintet comes from a long-standing bluegrass tradition but creates a wholly original sound by weaving their melting pot of acoustic roots music with the sounds of electric rock’n’roll. Jackass Flats combines a unique blend of jam band rhythms with twangy versions of contemporary hits that can elevate any event into a unique, rousing experience. Expect a repertoire that runs the gamut from Johnny Cash to The Beatles, Willie Nelson to Prince, Smokey Robinson to The Rolling Stones, all delivered with warm southern charm and infectious energy.

Luck Garden – Ryan Phillips, the lead guitarist of The Whiskey Rebellion, covers a wide array of artists ranging from The Beatles to Tom Petty, The Grateful Dead to Guns N’ Roses. His background may be steeped in rock and roll, but his acoustic roots weave their way into what becomes uniquely original bluegrass, jazz, and anthemic party favorites making for easy listening and danceable tunes.

ALL PERFORMANCES AT BLOEMENDAAL HOUSE

AUGUST 26  (Fidos Night) – Paul Urban & Friends is a Tidewater Roots and Blues Band that includes rock and funk influences in their music.  The band is fronted by guitarist and vocalist Paul Urban. Joining him are Julian Burrell on bass, Tyrell Reese on drums and keyboard wizard Tyler Bevington.

SEPTEMBER 9 (Fido’s Night) – Dance Candy Hip hop and pop, jazz and funk and straight-up R&B all creating a big, funky scene of party-down. Slide into a seat at a Dance Candy party and you’ll know there’s something a little different happening tonight. It certainly feels like a Pharrell meets Justin Timberlake kind of night with a vintage cocktail of chilled-out Marvin Gaye. Mix in the soul of Aretha and Bob Marley, the modern style of Cee-Lo and Bruno Mars, and chase it down with a nightcap of Stevie Wonder.

SEPTEMBER 23 (Fido’s Night) – U&I Plus Latin Band is a Cover band native to Richmond, Virginia. We perform a mix of Afro Caribbean Salsa infused with a bit of Old School R&B. Many of our covers you will recognize, with just a twist of Latin flavor!

Want more evenings in the Garden?

Get Tickets
GardenFest for Fidos!
See the Dates
Plan Ahead