Family Walk and Talks — STEAM is in the Air at the Garden! 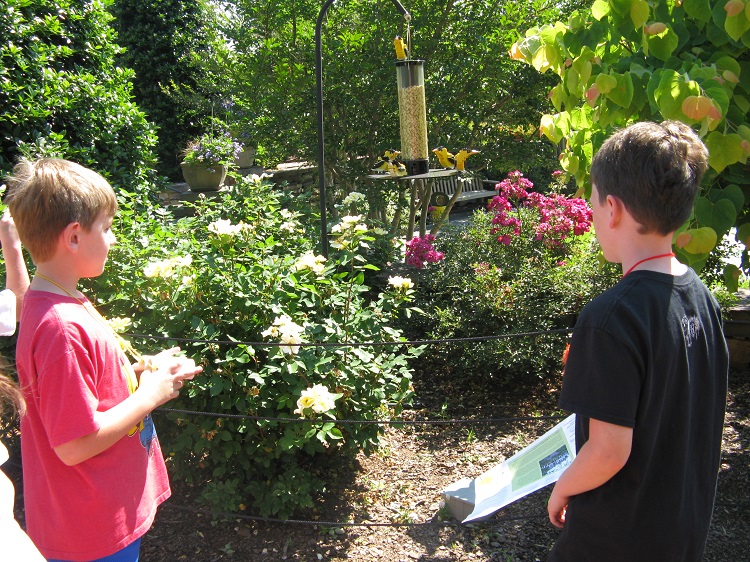 For our weekly Family Walk and Talks this summer season, Children’s Garden educators are taking advantage of the STEAM in the air. No, not the humidity, but science, technology, engineering, art, and math adventures all related to the Nature Connects®: Art with LEGO® Bricks exhibit.  Each week we feature a different set of Nature Connects sculptures – for my first Family Walk and Talk, I decided to focus on the beautiful birds.

It’s one thing to take a group of adults on a tour of the Garden, watching birds and taking the time to identify different species. It’s quite another thing to bird watch with a group of rising second-graders, third-graders and fourth-graders, especially when they’re already dressed in swim suits, ready to splash their way through Water Play. Good thing there’s an app for that!

To kick it off, we sat in a shady spot in the Central Garden and read one of my favorite bird books for kids, Where’s the Party? by Katharine Robey. In the story, a little girl follows different bird calls to a party – a birthday party for a new nest of ducklings! We decided we would do the same.

Armed with binoculars decorated with feathers, we set out to find the birds. Lo and behold, we found a hummingbird feeding at a flower and goldfinches feeding at a bird feeder almost right away. They were hard to miss – both vignettes were built out of LEGO® bricks!

The kids put their heads together to enter data into the Merlin Bird ID App.

After discussing the sculptures, we decided to go on the hunt for real birds in the Garden. But how could we identify the birds? Field guides are certainly helpful, but the real fun began when I pulled out my phone and introduced them to the Merlin Bird ID App that helps identify common birds by asking five simple questions: 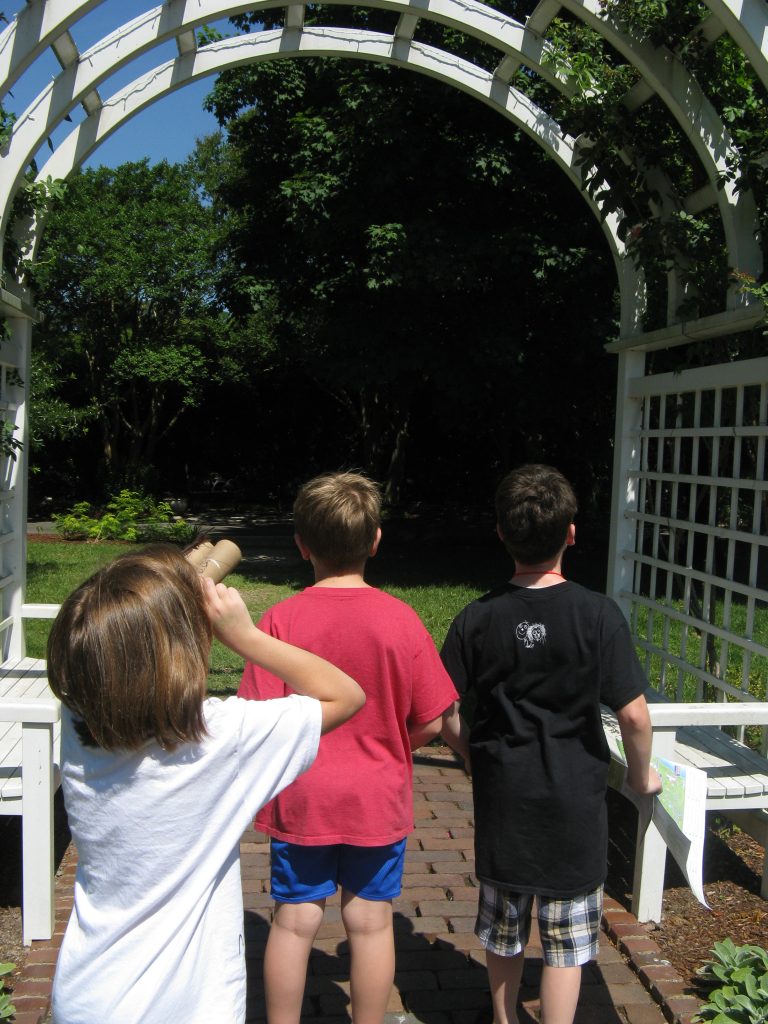 Lucy uses her bird-watching binoculars to get a more focused look at the mourning dove nest in the Grace Arents Garden.

After answering all five questions, the app, developed by the Cornell Lab of Ornithology, analyzes which birds are commonly in your area at that time of year. Narrowing it down by size,

color, and activity, the app presents photos of most likely matches. The photos feature males, females, and fledglings, which can often all look very different. And just in case there are still doubts, the app will also play the bird calls for you!

As the grandmothers accompanying the kids remarked, “you had them at the word app!” For the remainder of the walk, we visited three bird feeders and stopped and identified birds along the way. Listening to the bird calls to help us verify whether we had found the right one. Just like the book, the bird calls were leading us further into the Garden towards the party!

The kids were having fun using the technology to identify the birds, but they were also practicing science skills: making observations, recording data, comparing results, and drawing conclusions. Not only that, they were also practicing literacy skills while reading the names of the birds and spelling them out for our master list. In the end, we identified nine different species along the way — everything from a white breasted nuthatch and tufted titmouse to a female northern cardinal and the black and iridescent common grackle. 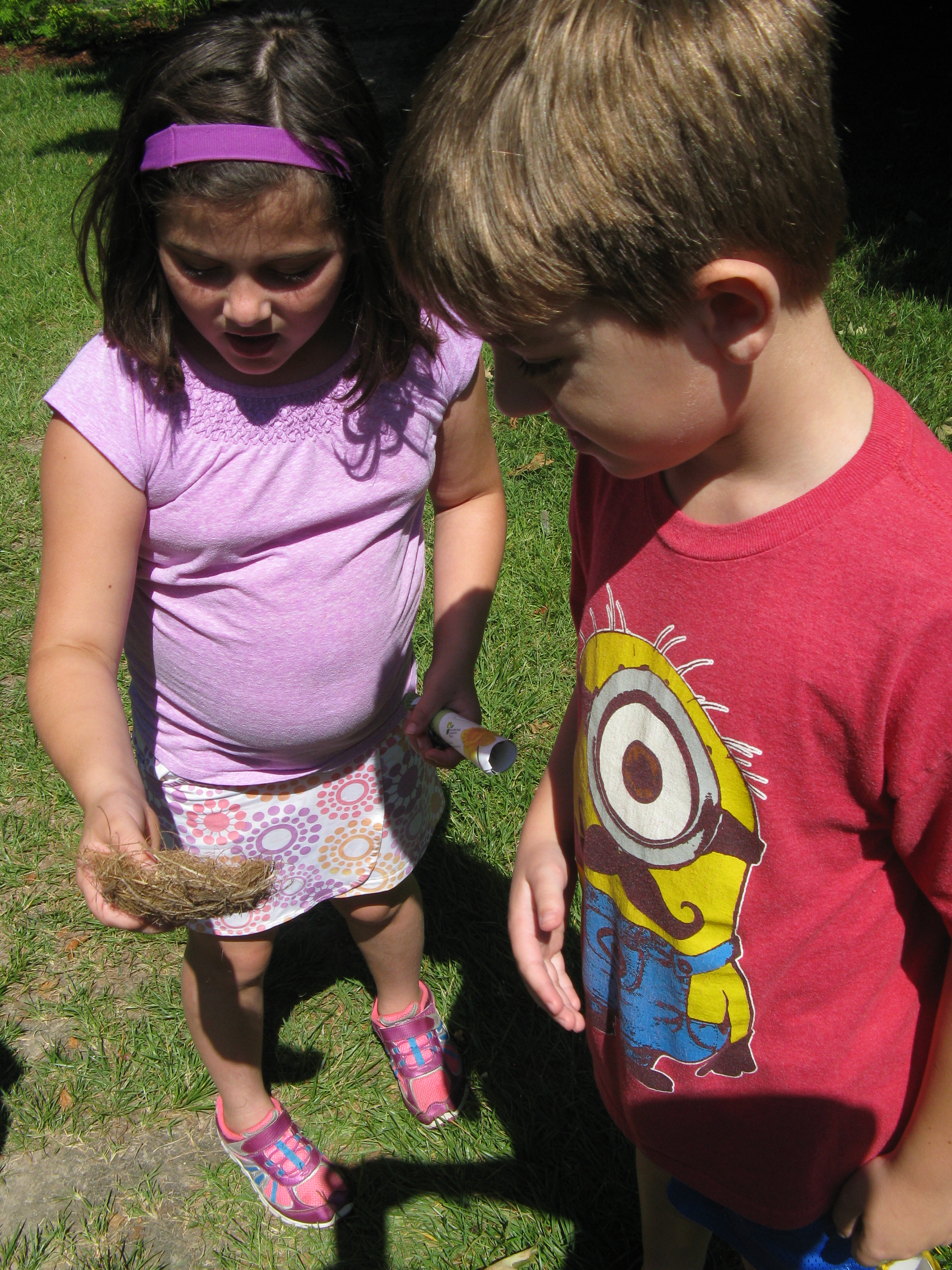 The intrepid bird-watchers discovered a nest on the ground. A new mystery is born: who built it?

And believe it or not, just like the story, we found a nest of new hatchlings in the Grace Arents Garden! Using the app, we discovered that it was a mourning dove with two babies. As if that wasn’t enough, we also found the remnants of a nest on the ground a few feet away, which we examined up close.

By all accounts, this bird walk was certainly a success! My favorite part was hearing the kids ask if they could download the Merlin Bird ID App on their own devices so they could try it in their backyards at home. It certainly seems like the next generation of bird watchers just hatched at the Garden!

As the Exhibitions Manager at Lewis Ginter Botanical Garden, Kristin Thoroman leads the development of seasonal exhibitions that support the Garden's mission to connect people through plants to improve communities. When not at the Garden, she loves exploring the sights and sounds of Richmond.

Meet us as we explore the Garden and Nature Connects: Art with LEGO Bricks!