A fig is a flower turned inside out. 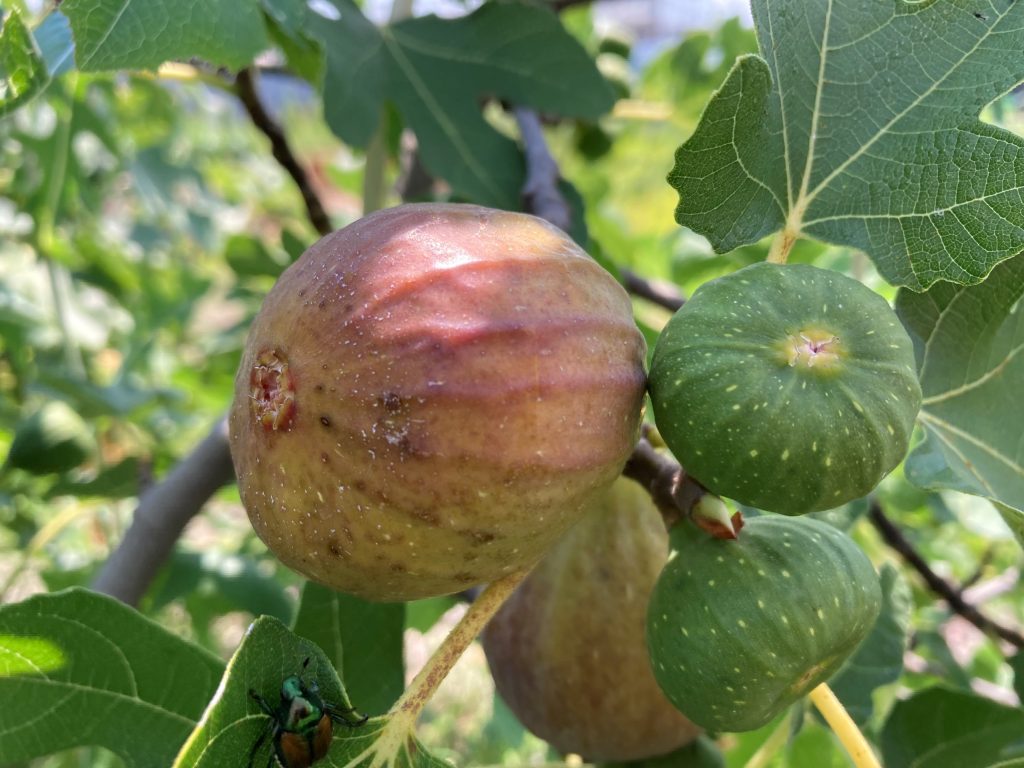 That soft pod of sticky summer sweetness is not a fruit at all. “It’s actually an inflorescence – an inverted cluster of tiny, fleshy flowers,” explains Mary Lincoln, Lewis Giner Botanical Garden’s Exhibitions Assistant. And while we love to wrap them in prosciutto, bake them into a batch of cookies or put them up in jars of preserves, a fig has a much higher purpose. It is the scene of a silent drama that plays out season after season, where lives begin and end and the secrets of the species are kept.

“There are over 750 types of figs worldwide, each one requiring pollination by its own unique species of wasp,” Lincoln explains. Fig wasps are so small, out of sight, and so seemingly insignificant that they don’t have a common name. But they are essential to the figs that have coevolved with them over 65 million years in synchronized service to each other. The rhythm of their respective life cycles is fine-tuned to meet each other’s needs at just the right time. Figs offer a snug nursery where fig wasps can lay eggs and raise young. In turn, wasps distribute fig pollen, enabling the plant to make seeds and reproduce. Theirs is a unique relationship, one of the best examples of mutualism in nature, where both of its members and the wider ecosystem benefit.

When it comes to fig pollination, it’s what’s inside that counts. An immature fig emits an enticing odor to signal that it is ready to be pollinated. Attracted by that odor, the female fig wasp burrows deep into the fig, tunneling a passageway for herself so narrow that she loses her wings and pieces of antennae in the process. She won’t need them. She will die in the dark interior of the fig after her life’s work here is done.

Once inside, she moves from flower to flower, laying her eggs and spreading the pollen she has brought with her from the fig where she was born. The flowers she pollinates will soon produce seeds; the eggs she lays will hatch, her larvae feasting on the tissue of their small, silent nursery.

“Male fig wasps hatch first, tiny and wingless, to mate with their unborn sisters inside the fig,” says Lincoln. “Then they tunnel their way out and die. The females are pregnant when they hatch, ready to make their own exit through the same tunnel.” Born and bred inside a fig, female fig wasps emerge from their edible incubators carrying a cache of pollen, ready to lay their own eggs in another immature fig and begin the lifecycle of a new generation. 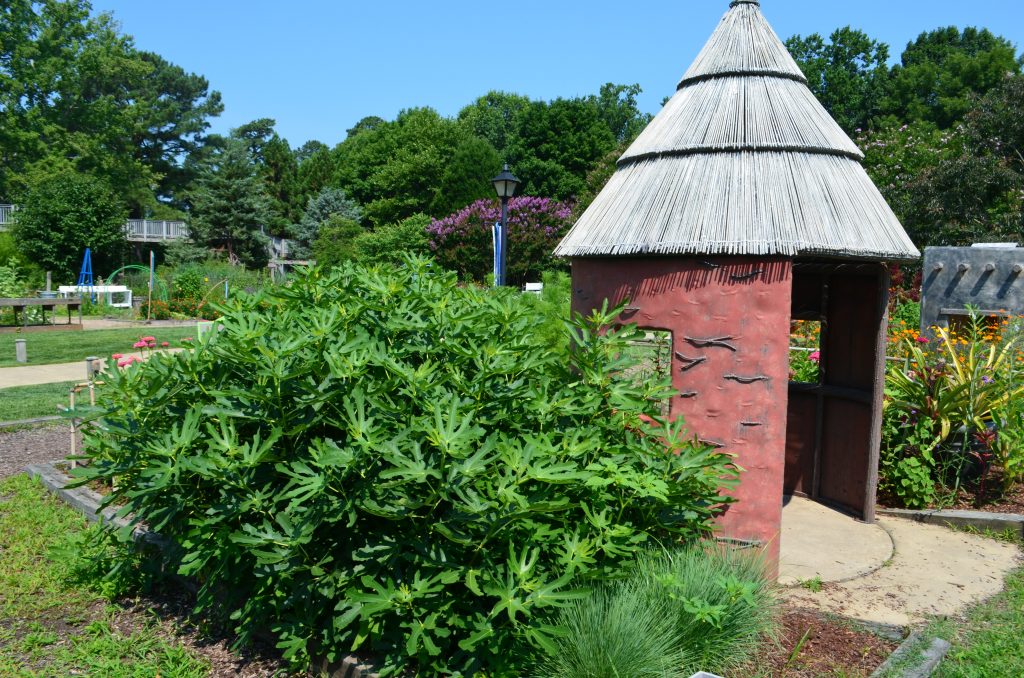 Brown turkey fig, Ficus carica ‘Magnolia’ fruiting this week in the International Village. This species is quite popular in Central Virginia because of its resistance to cold.

The delicate crunch you hear when you eat a fig is not the remains of a wasp, thank goodness! It’s the sound of the seeds. “Fig trees produce an enzyme called ficin that digests protein,” Lincoln offers reassuringly. “Ficin dissolves the wasp’s body, reusing the nutrients to nourish the fig.” The plant is the carnivore in this case, not you! The figs we buy in the grocery store have been specially cultivated to self-pollinate. “But there is a good chance that the fig growing in your back yard has or had a wasp in it,” she adds with a smile.

Figs are tropical plants — there are numerous species growing all over the world. And although only two of those species are native to the United States, many figs are able to survive here and produce fruit and are commonly planted in Virginia for that reason. Here at Lewis Ginter Botanical Garden, we have brown turkey fig trees or Ficus carica ‘Magnolia’ in the Kroger Community Kitchen Garden and the International Village of Children’s Garden.  They are fruiting right now!

Learn more about other insects and the important role they play in our ecosystem at the Secret Lives of Bugs which is open Thursday-Sunday from 10 a.m.-2 p.m. beginning through September 5, 2021.

Want to learn more about fig wasps and other bugs? Visit Mary Lincoln at the Secret Lives of Bugs micro-exhibition where you can learn a wealth of information about anything insect-related. 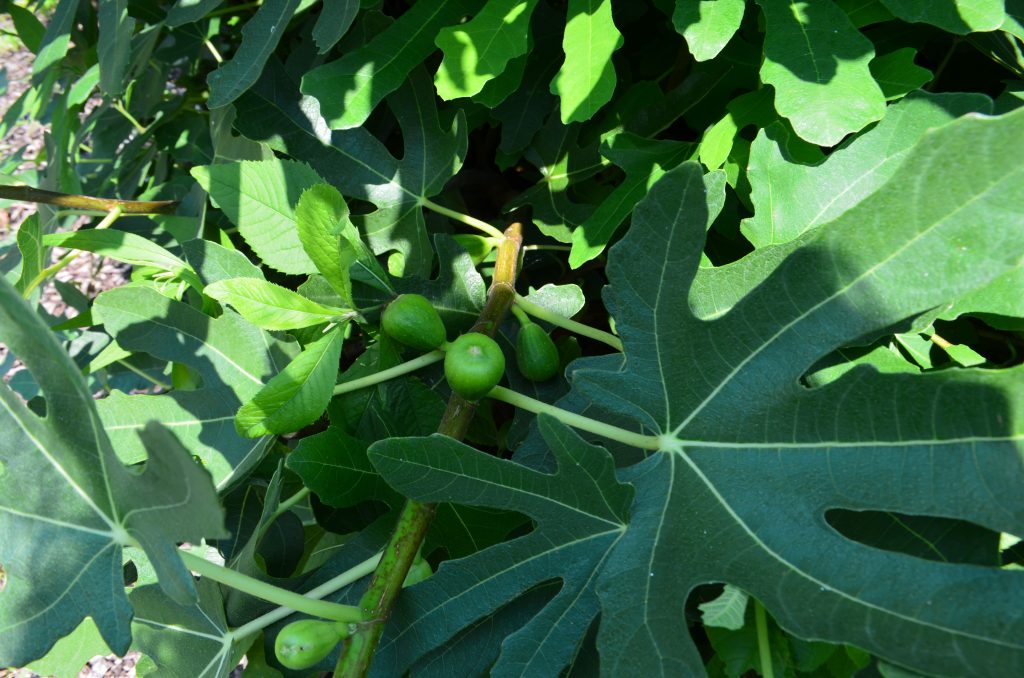 The unripe fruit of the brown turkey fig. Figs offer a snug nursery where fig wasps can lay eggs and raise young. In turn, fig wasps distribute fig pollen, enabling the plant to make seeds and reproduce. Theirs is a unique relationship, one of the best examples of mutualism in nature, where both of its members and the wider ecosystem benefit.