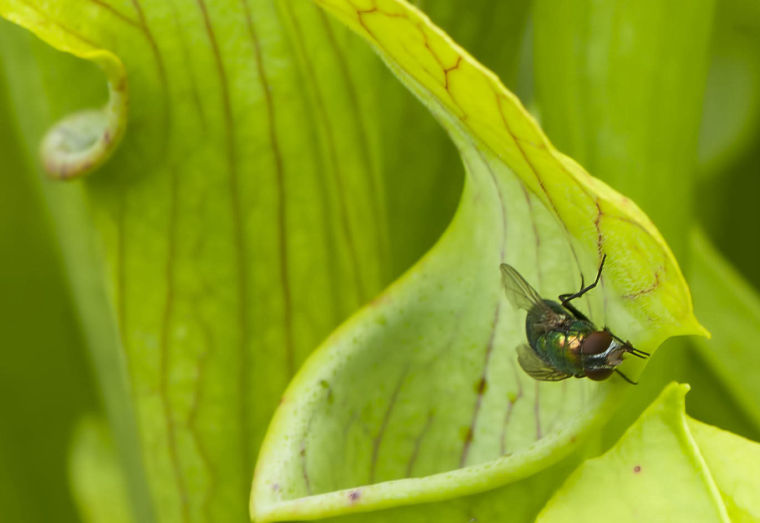 The carnivorous pitcher plant lures and captures unsuspecting visitors as a “nutritional supplement.” The plants are marked with colorful veins, spots or stripes that enhance their attractiveness to insects, as well as people.

A cunning carnivore with an inescapable death trap silently waits for prey in some southeastern wetlands. Its exotic markings and distinctive beauty are enhanced by sugary secretions and sometimes enticing odors that lure unsuspecting victims to draw near. While exploring its sweet, slippery “mouth,” the inquisitive typically becomes captive, plummeting through a long, narrowing tube toward death. Downward-pointing hairs prevent escape and force the prey into a deep pit of fluid where it drowns.
Enzymes or bacteria slowly decompose and digest the victim’s carcass, leaving only a trace solution of peptides, amino acids, phosphates and the like. Through absorption of these minerals the carnivore obtains vital nutrition, only to repeat the painstaking process when another “meal” comes along.
Though this scenario hints of fantasy, the fascinating “meat-eater” that’s described is real: the pitcher plant of the Sarraceniaceae family. Its intended victims are usually moths, flies, wasps, crickets and occasional butterflies that land on its leafy protrusion.
As a water-loving plant, it resides where other plants might not survive, such as near bogs and marshes. Sufficient nutrients are not readily available in the soil of most wetland habitats, so the pitcher plant’s pit-trap adaptation enables it to resourcefully obtain nutrients from insects it takes captive.
The West Island Garden at Lewis Ginter Botanical Garden is home to one of the largest botanical garden pitcher  plant collections on the East Coast. Horticulturist Claire Terry, who cares for the garden’s wetland habitat, said most pitcher plants prefer moderate to high light levels, high humidity and lots of water. “They don’t want to be in the water, but near the water,” Terry said. “They like a place that’s not soggy, but fairly damp.” 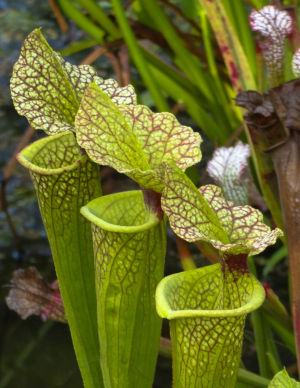 The pitchers of the Sarraceniaceae can be creamy white, rich purple, red or chartreuse, and eye-catching stripes, spots or veins make them distinctive.

The staff at Lewis Ginter allow the pitcher plants to die back naturally during winter. Then after the final frost in the spring, they cut the plants to the ground and lightly cover them with pine straw for protection from any late frosts and for support of the upcoming flower stalks. New flowering occurs in early spring before the pitchers develop, perhaps as nature’s way of supporting pollination before summer’s intense period of insect ingestion.
“Established plants may produce 10 to 15 flowers, and the flowers are just fabulous,” Terry said. “Though the stems stand upright, the flowers droop a bit, making them very exotic looking.”
Each flower’s seed pod holds numerous seeds, so the garden removes spent flowers before the seeds are distributed in an effort to limit reseeding.
Leafy tubes develop during late spring and summer, and their resemblance to water-bearing pitchers is the basis for the plant’s name. The pitchers can be creamy white, rich purple, red or chartreuse, and eye-catching stripes, spots or veins make them distinctive. While some species’ trumpet-shaped pitchers rise 3 to 4 feet above the soil, others grow small and low to the ground.
Pitcher plants don’t attract all insects, so they provide little help with controlling mosquito populations in bogs and marshes. What the pitcher plant does offer is wetland beauty and another example of nature’s amazing adaptations.

Editor’s Note: This article first published in the Richmond Times-Dispatch, in July  2013.