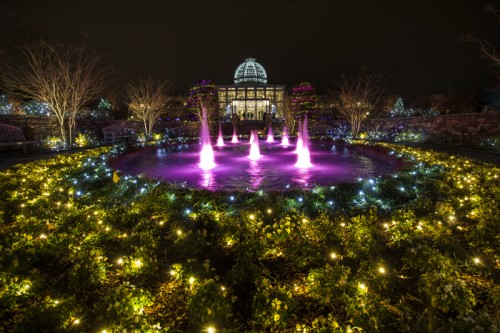 The Conservatory, photo by Sarah Hauser

Richmond is known for its tacky lights. We’re also known for our classy lights too. Here’s a roundup of the top illumination events in Richmond this holiday season. If you really love the holidays, you’ll want attend them all! Mark your calendar, these are just around the corner. And if you don’t get enough lights at the  illumination events, remember Dominion GardenFest of Lights continues nightly 5 p.m. – 10 p.m., November 28, 2014 through January 12, 2015 (closed Dec. 24 & 25) — perfect for a holiday lights double date, or a family night out with the kids. 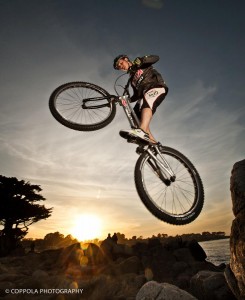 Dominion GardenFest of Lights Illumination, Friday, November 28, 2014: Opening night, the GardenFest Illumination is always chock full of excitement and entertainment.  This year opening night features Mike Steidley, a 12-time national champion and professional trials, freeride, and stunt rider for an action packed mountain bike stunt show! Also, the GardenKeeper, Butterfly Fairy and historic characters from the Garden’s past will be here to entertain you. Doors open at 4 p.m., Illumination ceremony at 5:30 p.m.  The opening night is a popular event, so you may want to arrive early and enjoy the Garden and displays prior to the evening activities. Everyone is invited to assemble on the Terrace Lawn in front of the Rose Garden at 5 p.m. to enjoy the stunt show and help count down to the Illumination. At 5:30 p.m. The Garden Keeper, Butterfly Fairy and a representative from NBC12 will flip the giant light switch and the Garden will be illuminated. From 6 p.m. – 6:30 p.m. Mike Steidley will perform an encore mountain bike stunt show in the Rose Garden followed by an autograph signing. Then stroll the Garden and enjoy the bike-studded Dominion GardenFest of Lights on your own. Our theme this year is A Legacy in Lights: 120 Years from Bicycle Club to Botanical Garden.

Also, how could I NOT mention that EnergyCycleRVA will have children and adult bikes in the Azalea Room, located in the Kelly Education Center, powering our unicorn light figure! You will be able to power this 100+ strand, 9-foot tall unicorn by simply riding a bike. Fun Fact:   The Children’s Maze, relocated to the Anderson Meadow, is now 50 percent larger for even more good times.  Fun Tip: A man-in-the-moon backdrop beckons you for a one-of-a-kind photo op! 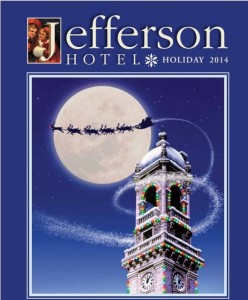 The Jefferson Hotel Grand Illumination, Monday, December 1, 2014: Always a hit with kids, and a family tradition for many, the Jefferson Hotel hosts Richmond’s biggest holiday fans for the lighting of their holiday tree. Live music starts at 5:30 p.m. and the lighting of the tree is at at 6 p.m. Also, don’t miss the parade of characters from Richmond Ballet’s Nutcracker, sing-alongs, and complimentary refreshments (traditionally hot cider, hot chocolate and homemade cookies) in the Empire Room.  Note, decorations stay up ’til January 5, 2015, so if you miss the Grand Illumination, you still have plenty of time to see them.  Tip: Don’t miss Music at Midday featuring musical talent from  local high schools in the Jefferson’s Palm Court and Rotunda during lunch hour.  Fun Fact: Did you know that Lewis Ginter Botanical Garden’s own Visitor Services Associate, Mabel Brock, also performs at this event each year with her spirit group CHEER!?

The James Center 30th Annual Grand Illumination, Friday, December 5, 2014: Richmonders gather to see their city skyline illuminated at the James Center, between 9th-12th and Cary Streets. The music and activities line-up is yet to be announced, but be sure to get their early, they flip the switch right at 6 p.m., entertainment continues until 7 p.m.

James River Parade of Lights, Saturday, December 13, 2014: Each year, boaters decorate their vessels and take to the river at dusk in a dazzling spectacle of lights. The James River Parade of Lights, which is sponsored by the James River Advisory Council, is one of the region’s most cherished holiday events. Spectators line the shorelines at several official viewing sites to take in the parade and other festive entertainment. The parade begins in Richmond, just below the fall line, and the boats cruise through Henrico and Chesterfield counties to the Varina-Enon Bridge. Time of the Parade: Boats gather at 5:45 p.m. (6 p.m. countdown for illumination). The parade lasts until about 8:30 p.m. Viewing sites (free admission): Libby Hill Park and Dock Street in the City of Richmond, Osborne Park and Boat Landing in Henrico County, Henricus Historical Park and Dutch Gap Boat Landing in Chesterfield County.   Number of viewers expected: 6,000-8,000.

Fun Fact:  In 1989, Harvey Price, then the dock master at Kingsland Reach Marina in Henrico County, decided to decorate his boat and cruise the James. Many other boaters laughed at him, but when they saw how much fun Mr. Price was having and how much people along the river appreciated his efforts, they decided to join him. In 1992, the James River Advisory Council (then called the James River Task Force) approached the boaters with the idea that the parade could be a yearly holiday event, and the official James River Parade of Lights was born.