How will Richmond Show its Spirit for Richmond 2015?

Editor’s note: What started as a nice email from Garden visitor Donna Copley after she enjoyed the Garden’s bicycle theme at this year’s Dominion GardenFest of Lights, A Legacy in Lights: 120 Years from Bicycle Club to Botanical Garden turned into a guest blog post. We enjoyed the photos and comments so much, we decided to share them with you. It’s exciting to see how a town might be transformed by a bike race and many of us are curious to see how Richmond will show its excitement. For our part, the Garden will host extended evening hours, weeknights during Richmond 2015 and will display a history exhibit, “From Bicycle Club to Botanical Garden” featuring a bicycle just like the ones that would have been ridden to the Lakeside Wheel Club, also, the John Meola bike sculpture will be on display during the Richmond 2015 event. 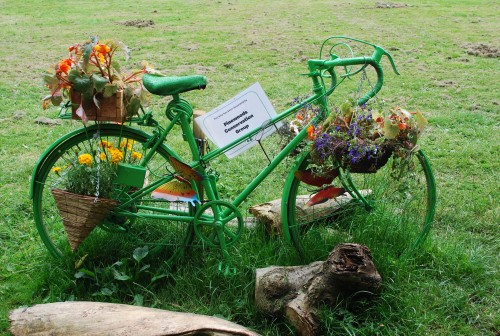 A conservation group got into the spirit of “Le Tour” with this bike decoration.

We live in Richmond and from watching Le Tour de France over the years, we have grown in to big cycling fans. We have experienced cycling events twice in Europe.

The first time was in Belgium for one of the one-day Spring classic races. We spent a few hours in a small town where the two races (women’s and men’s) went flying through the town. Even with such a short visit from the race itself, the town had a lot of cycling-related decorations and events. 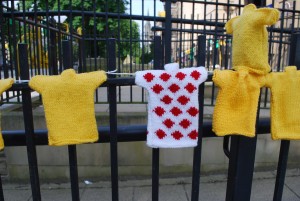 Le Tour de France shirt buntings. There was a call to knitters to volunteer to knit those jerseys. They asked for something like 3,000 and got something like 30,000, so folks obviously liked the idea!

The second time was last year in England when the first two stages of Le Tour de France were in Yorkshire (“The Grand Depart”) and the third stage finished in London. We spent five days in Harrogate, in Yorkshire. The organizers developed an entire program called the “Yorkshire Festival 2014: 100 days of Art & Culture,” which included an amazing array of cycling themed events and art. The whole region really got caught up in the anticipation of the Tour, even, admittedly, many of them knew nothing about the sport. By the time the riders had finished those first two stages, it was the greatest Grand Depart ever and the region continues to reap benefits from the exposure the beautiful countryside and towns received. 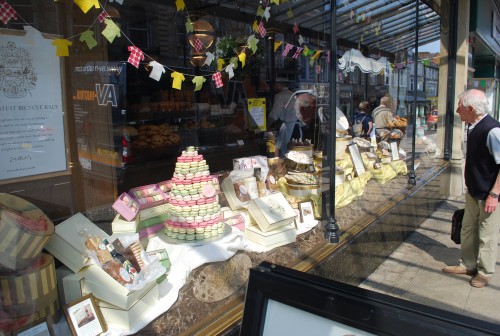 Even the bakeries got into the spirit! 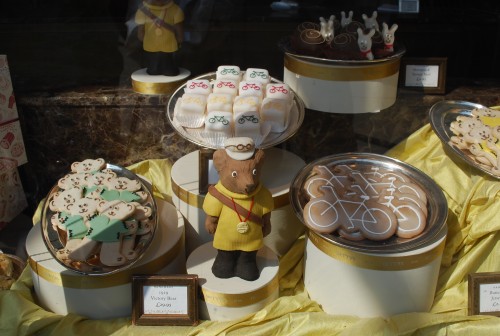 We can only dream that Richmond residents and businesses would get as excited! So we were thrilled to see the cycling theme at Lewis Ginter Botanical Garden this holiday season. We love that the all the historical displays and the bicycle pyramid sculpture will be back for the September UCI Road World Championships, Richmond 2015. I think the extended evening hours will be very successful … When we were in Yorkshire, there were plenty of us cycling fans who not only looked forward to and enjoyed the cycling, but also enjoyed many of the tourist sites in the area. 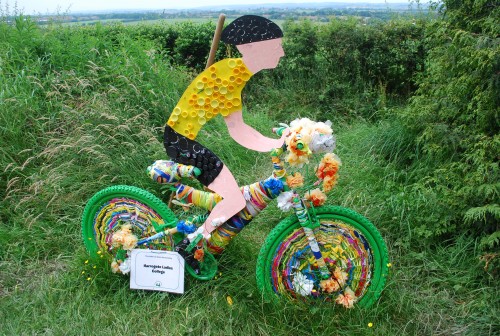 Local groups having some fun with the Tour de France visiting their city. 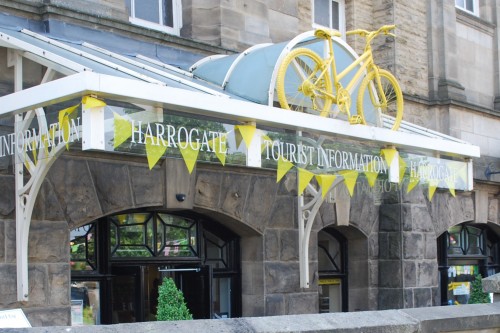