Grown-ups never understand anything by themselves, and it is tiresome for children to be always and forever explaining things to them. ― “The Little Prince,” Antoine de Saint-Exupéry

I hope my friends of Henderson Middle School are not too exhausted from all the explaining. I surely tried to allow them to have some time in the Garden without any talking. This was important. But it took a while to this figure out.

Every Wednesday afternoon when I brought them here for their after school program (Middle School Renaissance 2020, now doing business as NextUp) they were always asking if they could “have fun this time.” “Well, yeah, of course!” I would say. But with each visit it seemed I was struggling more to capture their attention, less show them a good time. 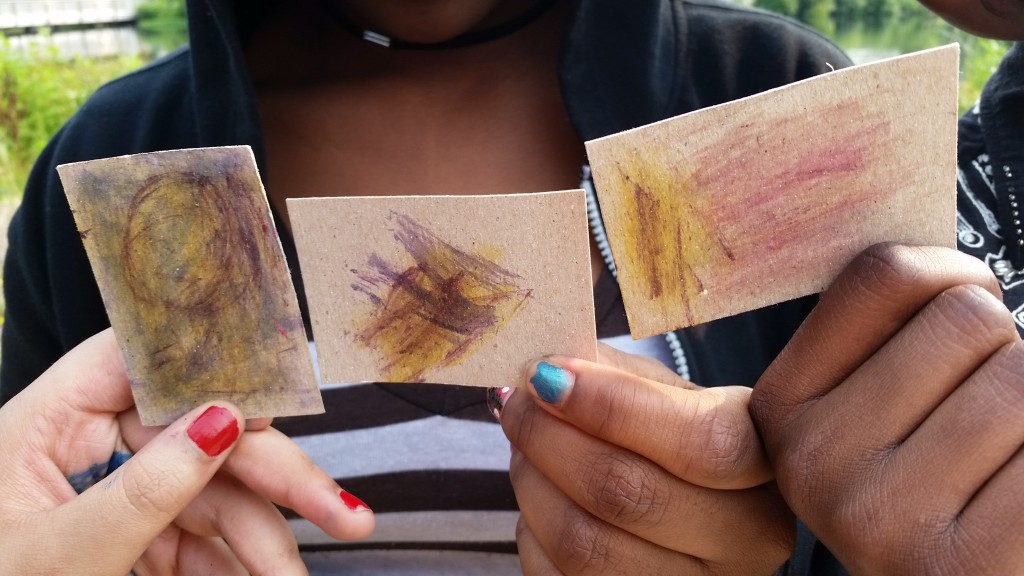 Experimenting with flower pigments in the Children’s Garden.

I tried showing plant tricks (medicinal uses), I entertained experiments (painting with flowers), I even took them to a haunted house (Historic Bloemendaal House), etc.  This group was like a Chinese finger trap: the more I tried the less effective I was. They continued to ask, “When are we going to have fun?”

The group couldn’t quite explain and they became frustrated with me “I dunno! Fun — like hula hooping” someone blurted, “making pancakes!” 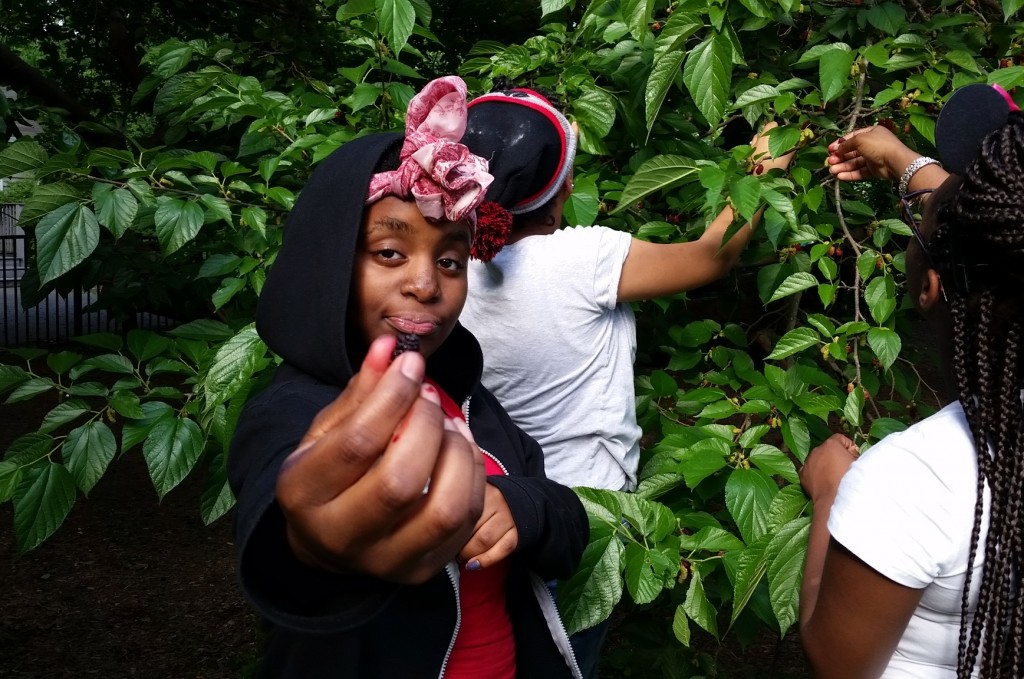 Kennijah smirks with a purple-fingered offering of a ripened mulberry.

The group harvests mulberries and strawberries for the pancakes. This is not their first time trying these fruits, though for many, their last visit to the Garden was where they first tried them. I sit under the mulberry tree and ask the students “What would you say to someone in the next NextUp session who didn’t want to try these mulberries?”

This proverb makes me laugh thinking back on the first day of the program — some of the students hid from me. There were others who outright refused to go to the Garden. The first thing I said to them was what my grandmother always told me at the dinner table, “Just try it at least once, if you don’t like it, then fair enough.” 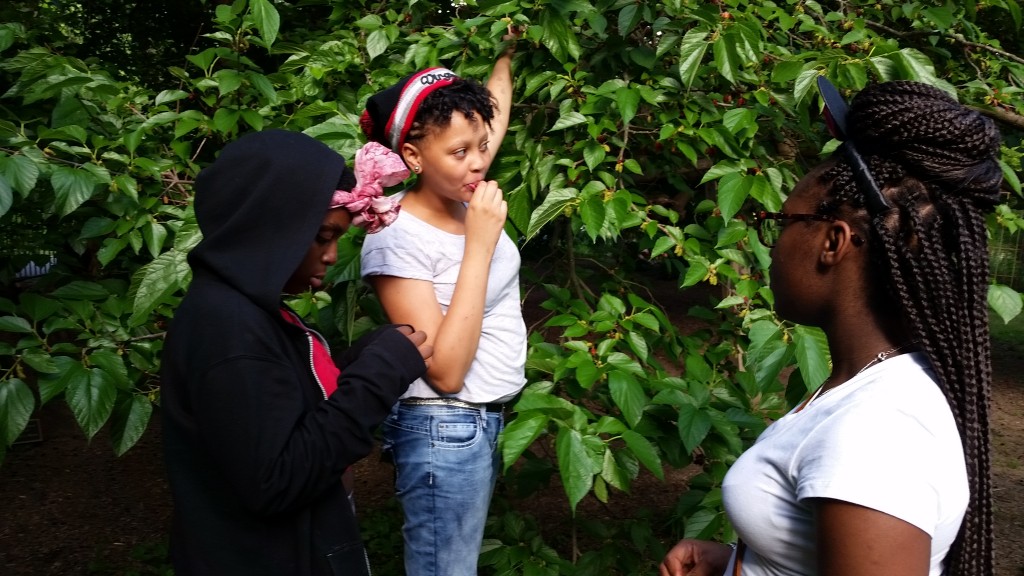 Yarianna smiles as she tastes a mulberry.

With each NextUp session, the activities lessened as it took longer to work through biases and fears the students had built up. They were at a seesaw age between a younger child who will try anything and an adult who is stuck in their way. It was worth taking the extra time to explain something like the importance of bees or the fact the dirt is not necessarily dirty, though not everyone was always swayed. Persuasion is easier when the explaining is done hands-on with little talk. 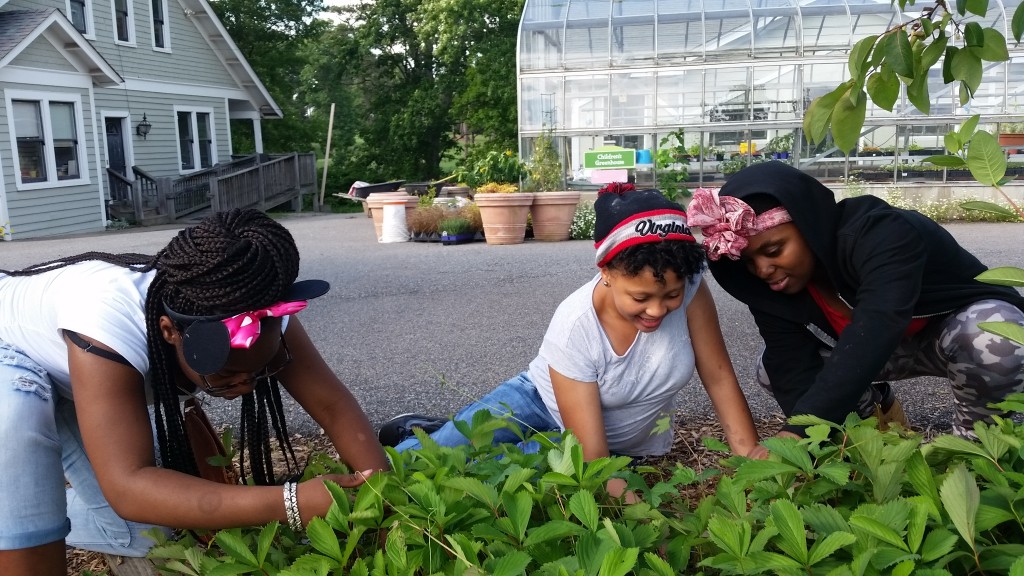 Memory paired well with the senses. Laughing and joking among themselves, I quiz Jasmine to see if she remembers why not all strawberries look like the ones that we pick in the Children’s Garden. She answers, “a lot of the really big strawberries [at the grocery store] are pumped with chemicals.” Yarianna follows, “the ones from the Garden [Fragaria virginiana] are fresh… and native.”  They are just a naturally smaller variety.

The students remembering these facts impresses me greatly. There were many distractions: fears, biases, trust yet to be earned, and other more logistical issues, like transportation. The Garden does not have it’s own charter system, so coordinating transporting minors through the public school system has its own complexities.

NextUp RVA, also known as Middle School Renaissance 2020, is a collaborative community initiative providing opportunities for middle school youth to continue their learning beyond the school day by building an integrated Out-of-School Time (OST) system to support and sustain quality-expanded learning opportunities after school across the city.