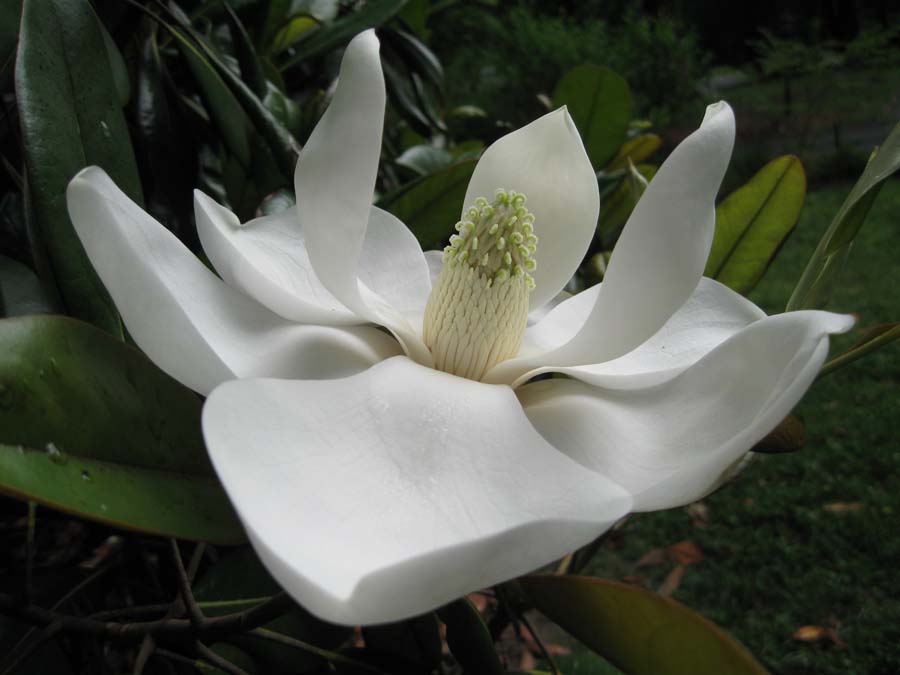 Bloom of the Magnolia grandiflora predates bees so is pollinated by beetles.

A southern summer wouldn’t be complete without the sweet smell of the southern magnolia blossom. Magnolia grandiflora, an icon of the South, is such a marvelous tree. Its large shiny evergreen leaves and large, showy, fragrant blossoms are a splendid addition to any southern garden. Here at Lewis Ginter Botanical Garden we have several wonderful specimens, one can be found in front of Historic Bloemendaal House in the Grace Arents Garden. But this magnificent flowering tree holds an age-old secret. Its genus is ancient and predates bees. So exactly how is a magnolia pollinated? Beetles! The flower has specifically evolved to encourage beetles for pollination purposes.

If you thought bees were the largest set of pollinators like I did, you’re wrong. It’s beetles, largely in part because there are so many of them. According to the United States Department of Agriculture, beetles are responsible for pollinating 88 percent of the 240,000 flowering plants globally. Beetles are crucial for the pollination of ancient species like the magnolia.

One of the most primitive of all flowering plants, the magnolia’s flowering structure hasn’t changed significantly in millions of years. The “cone” of the magnolia isn’t really a cone at all, but a woody fruit. During their development, the seeds are contained within the fruit, but as the fruit matures it splits, exposing the gem-like, red seeds. If you’ve never done it, take a green leaf and crush it. (Please don’t pick a leaf from the Garden, but from one of your own or with permission, from a private garden.) Smell the leaf. It has a very piney scent. When the red seeds pop out of the mature fruit in the fall, crush one of these between your fingers, just enough to break the fleshy aril covering the seed. Smell that! If the citrusy, piney scent doesn’t make you think of the holidays, I don’t know what would. These seeds are a wonderful source of food for songbirds as the aril is high in fat content.

So next time you’re sitting under the magnolias sipping on a mint julep, do remember you’re beneath an ancient genus as well as an icon of the South!

Fruit of the Magnolia grandiflora. In the early stage of development seeds are within the fruit, making it an angiosperm. Later, shiny, red seeds pop out and spill forth.

If you are interested in more information about the biology of the Magnolia grandiflora, read more from this abstract: The Reproductive Biology of Magnolia Grandiflora.