There’s a question we’ve been hearing a lot these days. “What do I do when Japanese beetles are eating all my plants?”  Japanese beetles happily consume and damage the plants that you’ve worked so hard to carefully tend. They are pretty indiscriminate and they love roses especially! 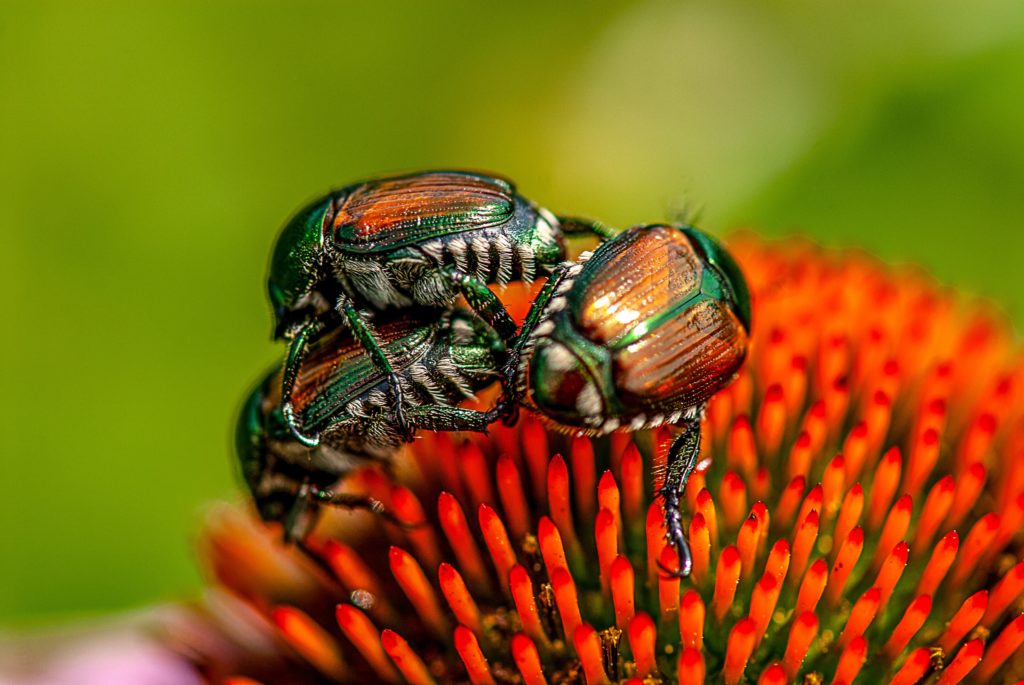 Where Did They Come From?

Japanese beetles (Popillia japonica) are an invasive species brought over from Japan in the early 1900s. Now, they are widespread in the United States and a major pest for over 300 plants, especially roses, raspberries and well, basically any tree or vegetable.  They continue to be a significant problem and often come up as a topic of heated discussion in our Gardening in Virginia — Question and Answers group.  Here at Lewis Ginter Botanical Garden, we are very familiar with these guys, but we have finally gotten the upper hand. We hope that you can learn from our experience.  Here are our top tips!

First, it’s a good idea to inspect your yard in spring for grubs and your garden in early summer  — May to June, depending on where you live — to see if you can find Japanese beetles. If you have them, starting treatment early is key.  The bad news is that grub treatments can take months, even years to take effect.  But the good news is that once you do treat, those treatments can last 20 years or more. Japanese beetle grubs are often more prolific in sod than in established rose or garden beds, so areas surrounding your garden with grass make a natural habitat for them.  You can roll back your turf in spring to count grubs to help determine how serious the infestation is before you spend money on control products. Did you know that beetle-damaged foliage attracts more beetles? So, removing beetles and any damaged foliage as soon as you see them will be a big help.  If you are trying to keep Japanese beetles out of your vegetable garden, using row covers for the month of June can be a deterrent.

The best treatment for Japanese beetles is picking them off by hand and tapping them into soapy water.  That is what we do here at Lewis Ginter Botanical Garden for the few that we find in the Rose Garden. Early morning is the best time to do that since as they don’t fly as fast then. But sometimes, you have so many beetles that hand-picking is not effective enough. That’s when it makes sense to use a turf treatment.  Some turf treatment products on the market for grub control are not selective and will harm beneficial species like earthworms.  Avoid those for sure.  We prefer organic milky spore (Paenibacillus papillae bacteria) a product that is applied to the turf as a dust. But it’s important to keep in mind that milky spore only affects Japanese beetles in larval stages, not the full-grown beetle.  That’s why it can take months or even years to have a noticeable effect. It’s true that milky spore can be expensive if you have large turf area, but keep in mind one application lasts 20 years! There are also systemic products, like Neem oil, that are somewhat helpful in managing Japanese beetles. Beetles eat the Neem oil and it keeps their offspring from developing. Neem oil can also harm fish and aquatic life, so never use it near ponds, lakes, or streams. (Please note that Neem oil can burn foliage when the weather is warm. When it is 70 degrees or warmer, a good alternative is all-season horticultural oil.) Whatever product you choose, check the label to be sure that it lists the pest you are trying to control.

Rose Garden horticulturist Laurie McMinn says, “We have gone from uncountable numbers of Japanese beetles in the Rose Garden to less than a handful the past few years. I firmly believe the milky spore treatment has been a major factor in controlling the grubs.”  Plus, you can’t beat the fact that it’s organic and non-harming to other insects or plants.  Japanese beetles may be a nuisance for gardeners but getting rid of them doesn’t have to be a lifelong struggle. The key is vigilance, acting early before things get out of hand, and a bit of persistence.

“I keep a plastic bottle with a wide mouth opening and a lid filled with soapy water on hand. When I inspect my roses in the morning I just tap the beetles into it as soon as I spy them.” Now that daily check along with the milky spore treatment has them mostly under control. It just takes a few minutes each morning to hand remove any stragglers.

If you want to see results while you are waiting for the milky spore treatment to take effect, companion plantings can also help. Geraniums are beautiful and are especially good to plant near your roses and other vulnerable plants. Geraniums are an especially effective control because if a Japanese beetle eats geranium leaves it paralyzes them temporarily — long enough for a predator like a bird to come along and eat them. Plants in the allium family, marigolds, rue and tansy can also discourage beetles.

Please note that we do not recommend “beetle bags” or beetle traps that have pheromone to attract beetles in the flying stage because that can increase your population.  You will surely catch lots of beetles, but you’ll be attracting them from all over the neighborhood to do so!