Leaves from the Library: Trees that Capture the Love of Children 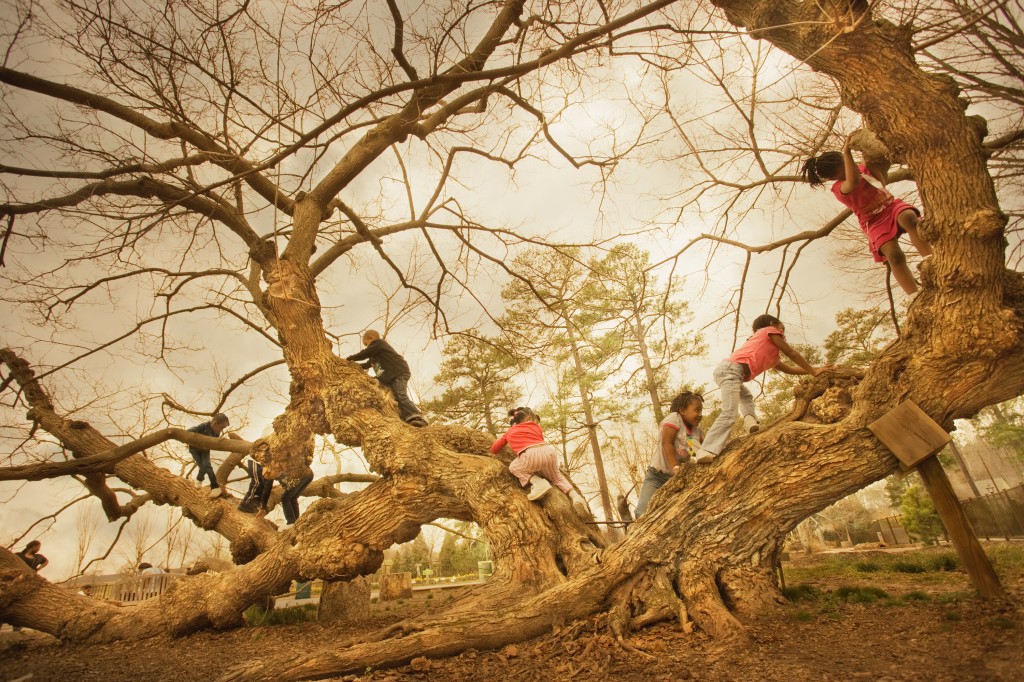 In Teaching the Trees: Lessons from the Forest,  Joan Maloof, asks us to reflect on our childhood memories of trees.

“It turns out that many people have a very specific memory of a particular plant species, a memory of wonder….” she says.

I was born and raised in Missouri and the first tree I learned to identify was the black walnut. There were several growing near our house. I have a picture of my brother (age 1) and me (age 4) sitting in the tree.  I spent many an afternoon trying to crack those nuts. I learned to wait until the green covering dried and cracked before attacking the nut as those coverings are stinky before they dry. The hull of the walnut is extremely hard. After hitting my fingers with the hammer a couple of times, I just let the nut lie on our concrete porch and tried to hit it. Most times I would just hit it a glancing blow, which turned it into a flying projectile. Being hit by a flying walnut smarts! I never managed to get at enough nutmeats for my mother to use in a cake. So, at church dinners I always checked out the buffet table for a homemade black walnut cake and made sure to get a piece before it disappeared. The black walnut ice cream, made at ice creams socials using hand-cranked freezers, was always my first choice.

When I was about 8 years old, I discovered another marvelous tree. It had long branches that touched the ground all around so densely that the trunk was hidden. I couldn’t resist working my way through those branches and discovered a secret haven, a roomy cave. The sun filtered through the green leaves and I was enchanted. I was in love with a tree! I asked the name of the tree and was told it was a weeping willow. Ever since, I’ve been a sucker for any plant that has the word ‘weeping’ in its name or description. ‘Cascading’ is a lure, too.

Although  we don’t have black walnut or weeping willows  here at Lewis Ginter,  Lucy, the Garden’s Group Tour Developer, and Maggie our librarian in the  Lora M. Robins Library, have helped me identify a tree that is very special to many children today at Lewis Ginter. The  mulberry tree, in the Children’s Garden is over a hundred years old. During late spring and summer when the mulberry branches burst with luscious dark berries, many a child can be seen climbing the tree and trunk and sitting, perched on a branch until the dark red juice is all over their hands and face.  Even the birds vie for space in the branches because the fruit is so sweet. The children know, the trick is to find berries that are black — they are the sweetest. If you find a red one, you’ll learn quickly, they are sour. Mulberries are a really neat fruit. They don’t have large seeds like blackberries — but they taste a bit like them. And they have short stems like blueberries.

Many photos have been taken of children in this tree,  often you’ll see entire classes perched in its branches on a field trip, posing for a class photo.  But one of the most famous photos of this tree  is by Robert Llewellyn and featured in Remarkable Trees of Virginia, which we have in both our library and The Garden Shop.

Join us at the Garden to wander the paths — you just might discover a new plant you love or reconnect with an old one.  And if you have never tasted a mulberry — you’ll have to visit the Children’s Garden this May — usually Memorial Day is peak picking season and the fruit lasts a couple weeks.  I promise, I won’t tell if you want to climb the tree for a few berries.