One of the best things about Lewis Ginter Botanical Garden is that we just get better and better!  In early 2011, expect some major enhancements to the Central Garden (CG) between the Robins Visitors Center (top of photo) and the Conservatory (bottom of photo.) 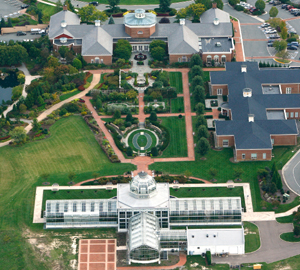 The proportions and forms of the Central Garden are classical in their origins, linking well back to 18th-century garden design. This classicism really “wants” symmetry and balance (not to mention the influence of the surrounding classical architecture), and that is what you will see by the end of the process.

Weather permitting, construction will begin just after the new year to enhance pedestrian circulation in the Central Garden. Additions will include a new diagonal walk on the west side of the Sunken Garden (in front of the Education Complex), a perpendicular walk on the east side (from the Café toward the Conservatory), and a second “veil of trees” on the east that will define the fourth wall of the area. These new walks will result in two spectacular, triangular planting beds flanking the entrance to the Conservatory – the ideal site for seasonal displays of tulips, summer annuals and mums. The square footage of the display areas will double, and visitors will be able to circumnavigate the beds to enjoy the displays from all angles. New lighting, seating and irrigation also will be added, though memorial and honorific plaques will not be disturbed.
In addition, there will be an exciting addition to the Sunken Garden itself, bringing new life and interest to the area. (Suspense! More details to come!)

Watch for significant changes in the West Island Garden next year, as well.  Originally completed in 1993, the West Garden will undergo some much-needed TLC, including the addition of new weirs (small dams) to control the depth of the water for the delicate bog species, and new walkways and plantings that will make views from the Tea House even more stunning. The wetland-bog nature of the garden will be retained, as will the habitat for the many fish and reptilian species that thrive there. The diversity of flowering species also will be expanded, as will the seating and visitor interest.
And, we are not done yet! There are wonderful plans to plant a Japanese cherry tree collection around Sydnor Lake, including walkways, lighting and seating, beginning in 2012.  It will be our April highlight for years to come!
There is so much to look forward to at the Garden.  Come often to enjoy the process and the results!