I’ve always been a quiet fan of moss, the herbaceous plant that reminds me of mysterious forests and rainy days. But not everyone shares my love. For instance, Virginia gardener Norie Burnet  once “had the mindset that moss belongs in the woods, not your garden.” 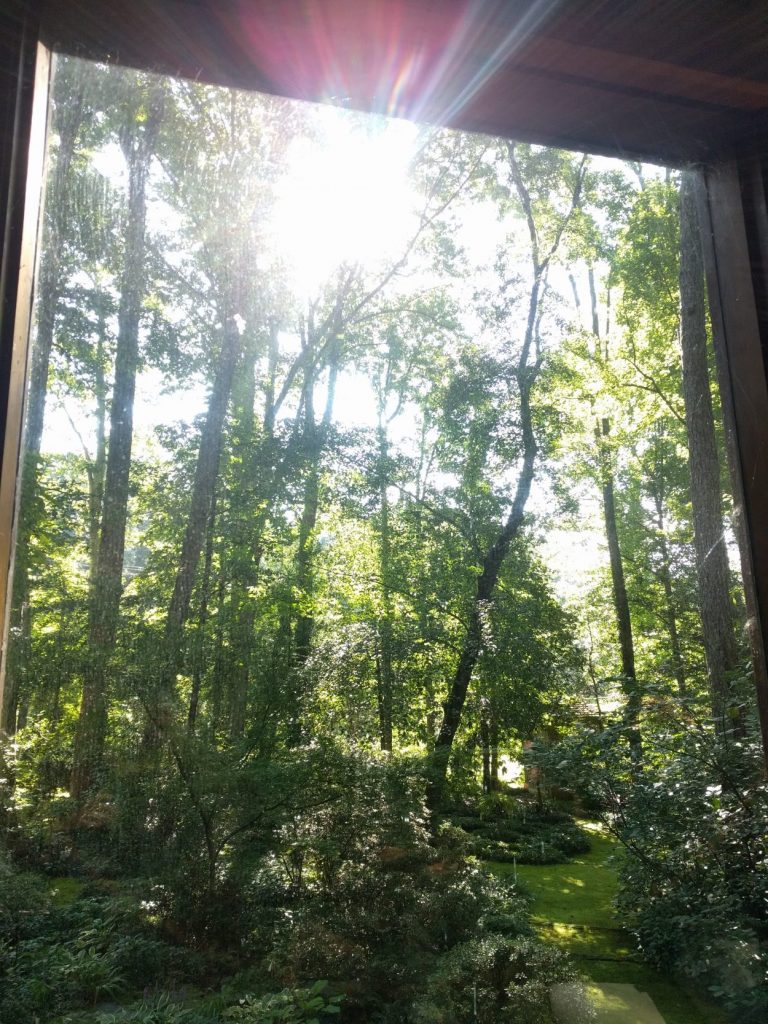 The spacious view of Eden Woods from the tall windows of Norie Burnet’s home.

That isn’t the whole story, though. Burnet is now the caretaker of Eden Woods, a spacious garden celebrated for its winding, mossy paths—so much so that she is known in gardening circles as “the Moss Lady.” Recently, I had the opportunity to join fantastic volunteers and horticulturalists from Lewis Ginter Botanical Garden for a visit, one of several trips they’ve made to the area. There, we learned the secrets of Burnet’s moss, and how it turned, in her eyes, from a mistake to magic.

As soon as we arrived, Horticulturalist Megan Lacey wanted to know how the moss had been doing with the intense bursts of summer rain. “Oh, the moss is delighted,” Burnet chuckled, leading us inside to a picture window that gave us a full view of Eden Woods.

Pictures don’t do this garden justice. It’s a verdant prism, with soft sunlight refracting through the multilayered canopy of the trees. It feels like a place you could wander forever—and yet, it’s all in a backyard on a commonplace street in Bon Air, Va. We lingered in front of the picture windows, in awe of the yard’s fairy-tale appearance. Even more impressive was learning that Burnet blew leaves off the moss for five hours the previous day to prepare for our visit!

When I first saw Eden Woods, it was hard for me to believe that it began with the intention of being anything but a moss wonderland. Yet Burnet was quick to tell us of her original dream: a “normal” garden based in beds and grasses. Her vision was disrupted by the moss, which kept coming in.

“Finally,” she said, “I just gave into the moss. And the rest is history.” 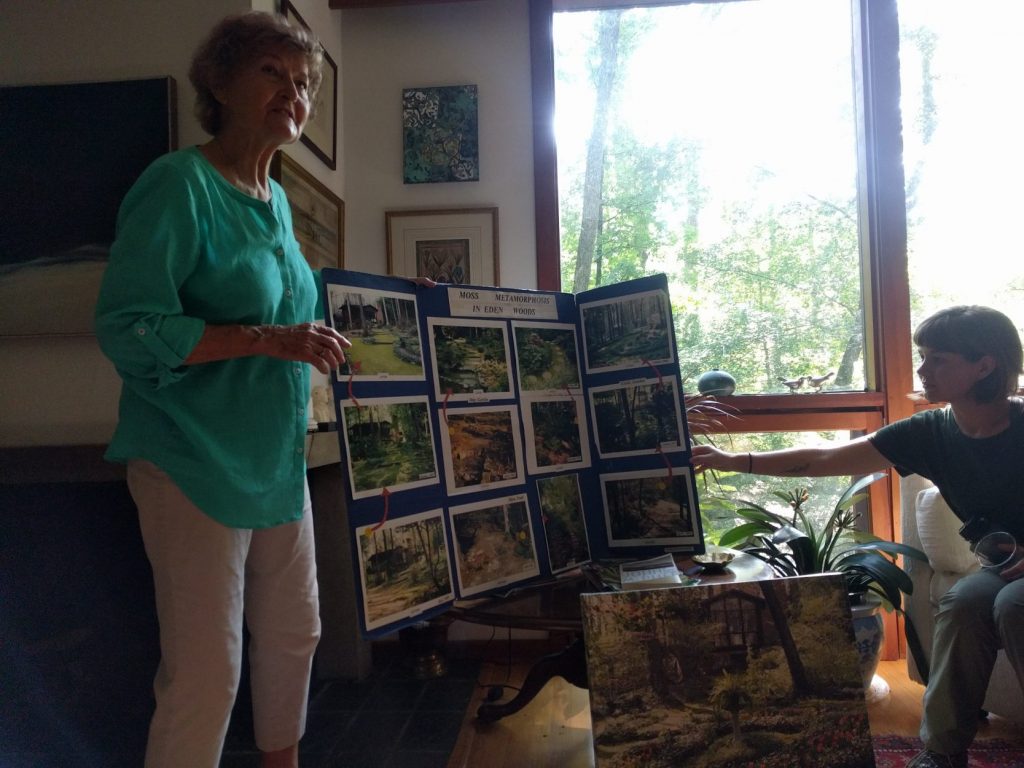 Burnet’s willingness to work with the moss, rather than against it, paid off. Eden Woods has been featured in several garden guides for its unique focus, including the Smithsonian Archives of American Gardens.

Director of Horticulture John Morse was curious if Burnet used techniques to encourage the moss. “A lot of people think that when I come here, I planted all this moss. Uh-uh. This has all come in naturally,” she said. She rarely uses a rake, which could damage the moss, and makes use of a blower to clear leaves. The blower doubles as a way to carry spores through its wind-like gusts. She also sprays water, absorbed directly by the moss’s cells, for nourishment.

Though moss is the hallmark of Eden Woods, Burnet deliberately nurtures a diverse mix of plants, with natives and wildflowers growing alongside hybrids and non-native species. On my walk through the garden, I had the chance to see shade-loving  hosta, clethra, astilbe, and a deerhorn cedar tree. “This is a garden that has many personalities, as we [people] do,” she said.

It is clear Burnet’s landscaping vision includes looking at moss as her palette. “I’m an artist as well,” Burnet said. “This is my canvas.”

The first sight in the garden that caught my eye was far from inconspicuous. This bamboo patch, which winds alongside the entrance to Eden Woods, has been growing for nearly 55 years since the house’s original owner planted it. 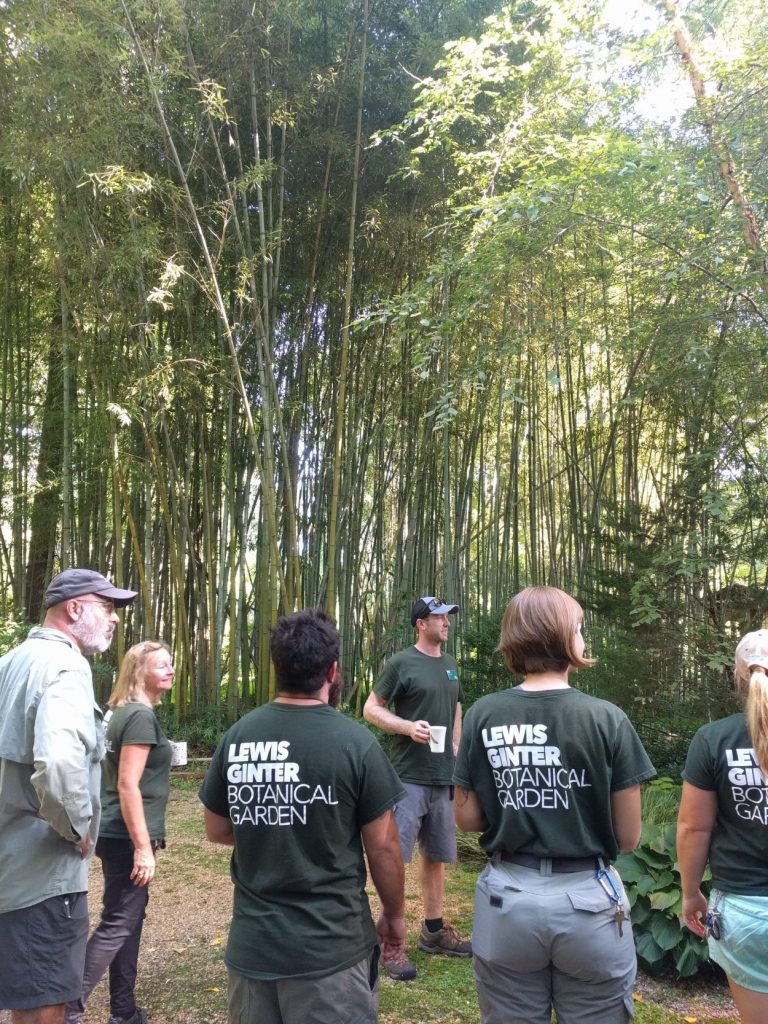 Horticulturalists and volunteers from Lewis Ginter Botanical Garden wait under the bamboo for the beginning of the tour. Notice the massive size difference between people and bamboo! 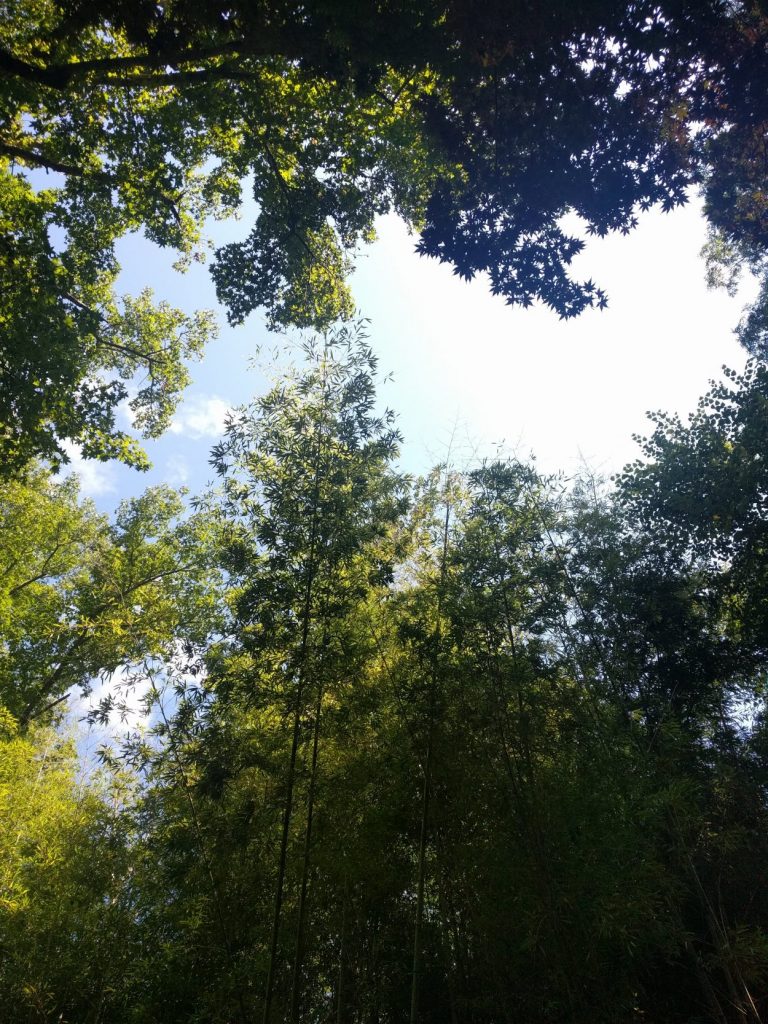 The bamboo of Eden Woods shoots into the sky.

The bamboo serves as an example of one of my favorite aspects of Eden Woods: its variation in design. Our tour with Norie Burnet led us down into a sunken garden, along winding paths of moss, past grass-accentuated sculptures, and near pond gardens teeming with aquatic plants.

“So many people have asked me ‘What’s your favorite season?’” Burnet commented with a smile when someone put forward the question at the end of our tour. Ultimately, she can’t decide. “It’s like asking about your own children.” 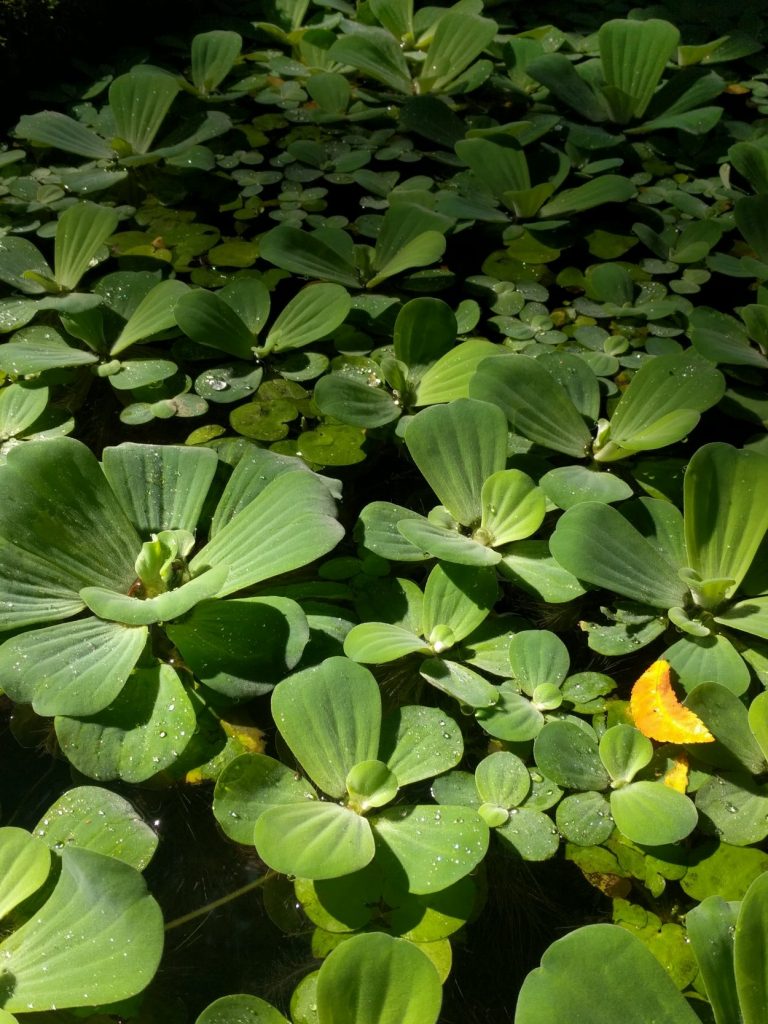 The surface of one of the two pond areas in the garden is covered under aquatic plants. 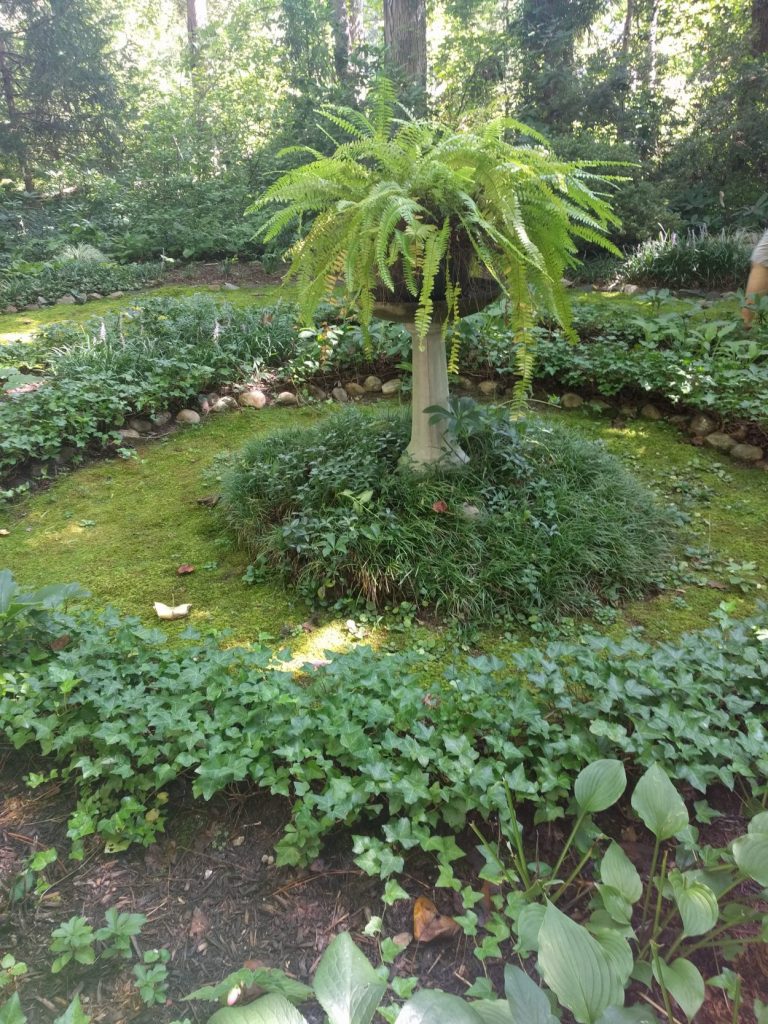 Burnet’s “circle garden”, dedicated to her father, who arrived in the United States from Amsterdam.

Of course, no description of the variation of Eden Woods, or of Eden Woods itself, would be complete without moss. There was climacium moss from North Carolina—“like a little furry animal,” in Burnet’s words–and moss with liverworts creeping up rocks. And then there was Polytrichum commune, more commonly known as haircap moss, with a pointed yet ticklish top that I could have lain in for hours. 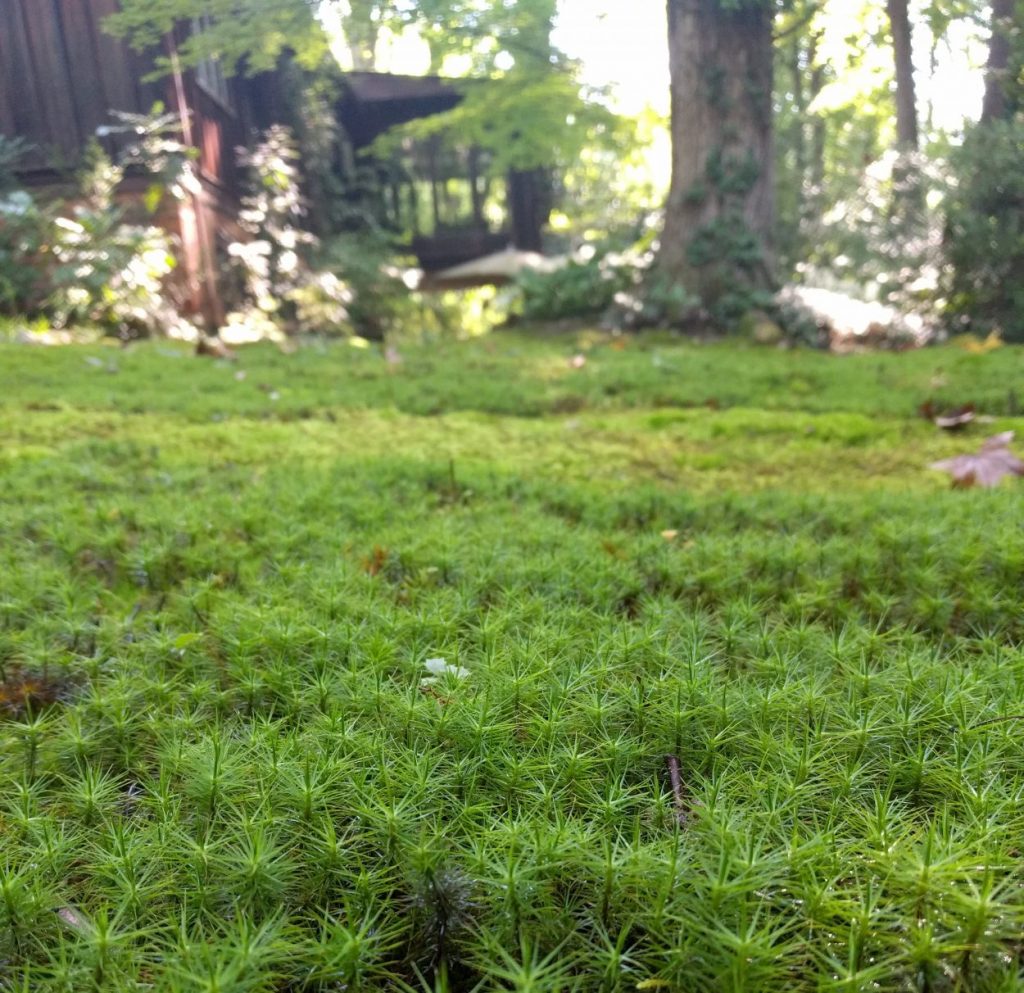 The ubiquitous moss of Eden Woods, like this polytrichum, adds texture to the garden–and for your feet!

In one of the highlights of my visit, Burnet allowed us to take off our shoes and walk barefoot. I let time pass as I stood still, letting moss brush pleasingly between my toes. But even while wearing shoes, I could feel it as it quietly enveloped my covered feet. 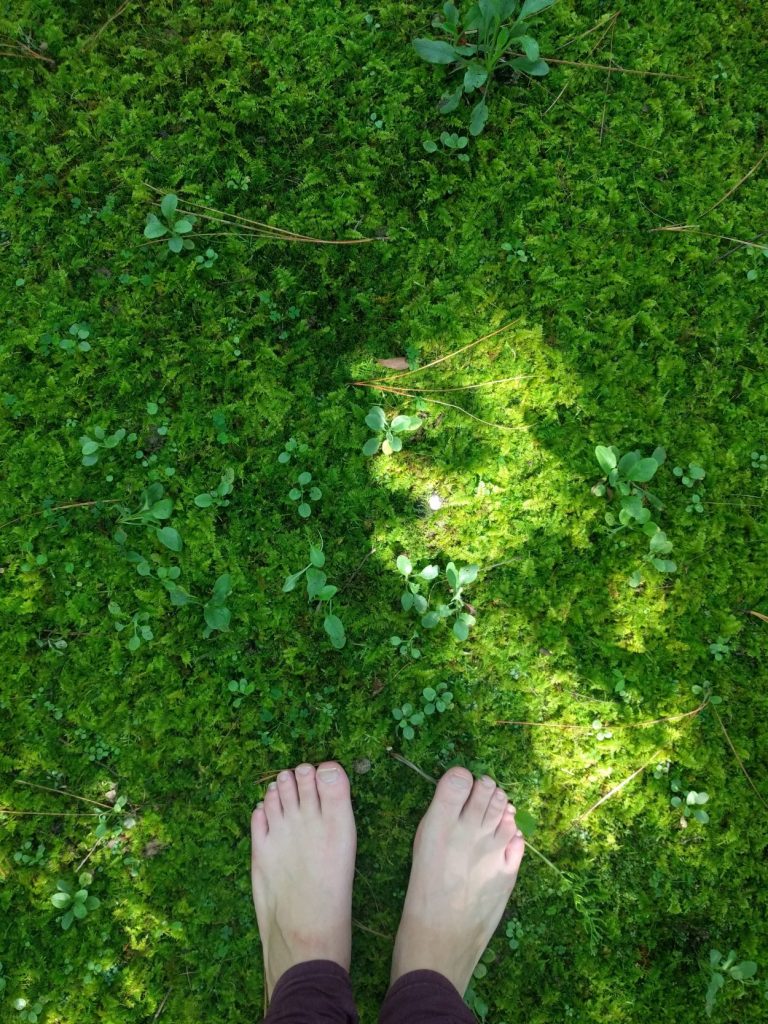 Want to see more? You can view more pictures of this fabulous garden in the book “The Magical World of Moss Gardening,” which contains six pictures of the garden, available in the  Garden Shop.

Next time you see a patch of moss, in the forest or in a neighbor’s yard, I would strongly recommend an in-person visit–shoes not required–to enjoy the full effect.

Claire Jeantheau, the summer Public Relations/Marketing Intern at Lewis Ginter Botanical Garden, is excited to use her background in writing and social media to tell the stories of the green spaces here she loves. She currently studies classics and social entrepreneurship at Dickinson College.