You can find a rare beauty, Magnolia amoena, right here in Richmond, blooming now at the north end of Sydnor Lake at Lewis Ginter Botanical Garden. With plants, like people, I try not to have favorites, but when you are in love, you are in love.  And the striking form of this magnolia —  the shape, the color of its blooms, and the way it looks when you are standing in its shadow looking up at its blossom above is a breathtaking experience. 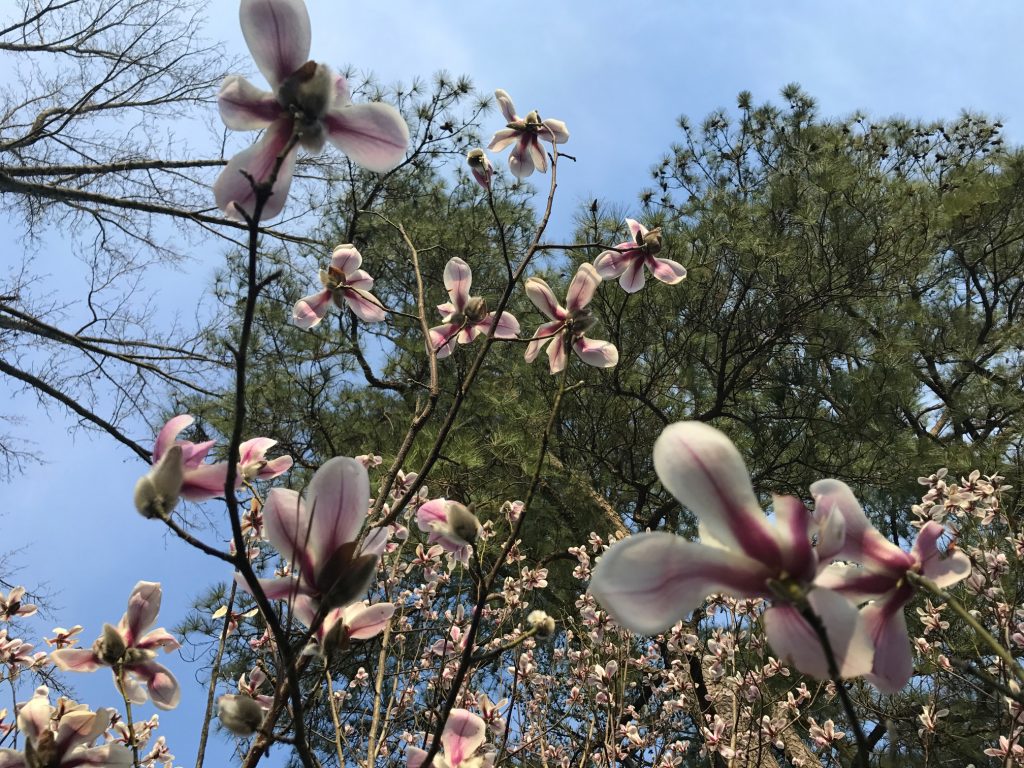 Magnolia amoena, sometimes called the Tianmu magnolia, is from the region outside Hangzhou, China. It is so named because it is native to the Tianmu Mountains there.  Amoena means “beautiful” or “pleasing,” a perfect name for such an exquisite species. According to the 2014  IUCN Red List of Threatened Species, its numbers are decreasing in China due to habitat loss. 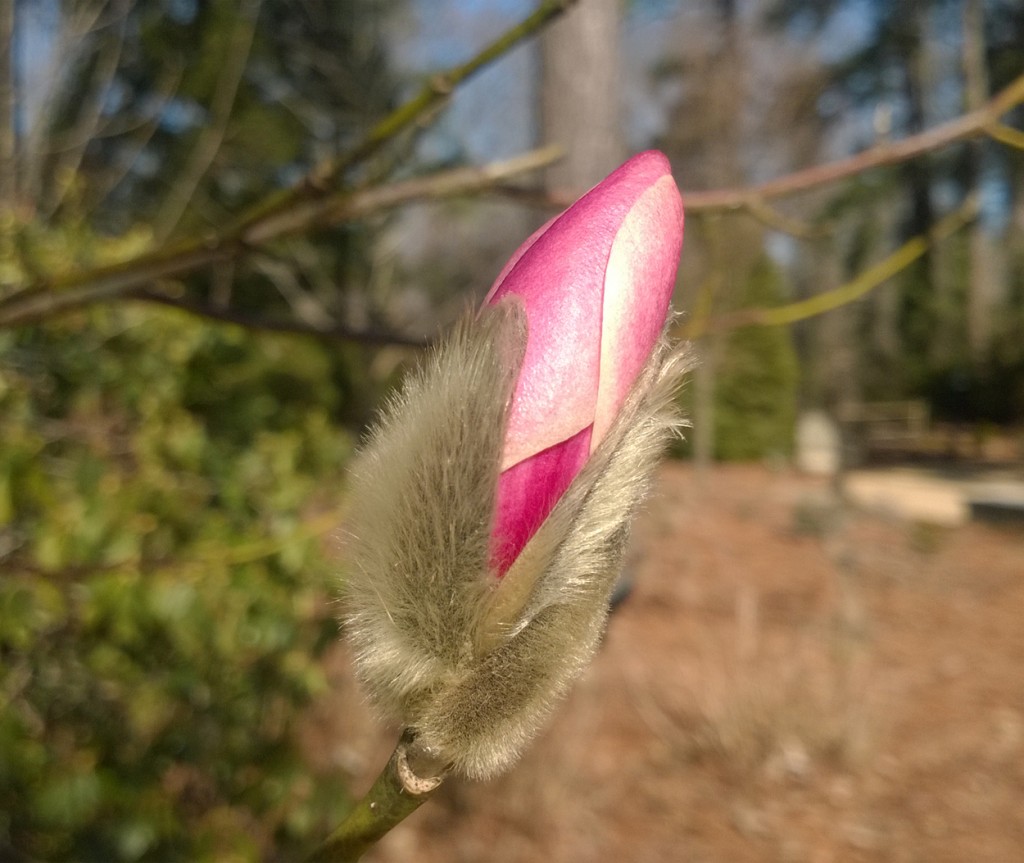 My first impression of Magnolia amoena, which can be seen blooming in the Lucy Payne Minor Garden.

My love affair with Magnolia amoena started many years ago. I first tried to write about her in 2016 when Senior Horticulturist Elizabeth Fogel sent me this image above. She was just about to bloom. Each year, I set a reminder in my calendar to check for blooms and to try to research more about this beauty, but I just haven’t had much luck unraveling the mystery.

“The only thing I know is that it was one of Bill Smith’s special plants. He brought it to the garden, and it was planted here prior to my arrival in 2006,” Elizabeth explains.  She mentioned that the horticulturist who worked in this area before her might know, but I had no luck getting in touch with him. We know from our plant records that it was planted here in 2004, but that’s about it. We know that before he died in 2016, Bill devoted the last 15 years to creating, evaluating and distributing new and improved magnolia species for Virginia gardens.  Bill was well-connected in the magnolia world. Perhaps someone gave this Magnolia amoena to him. Bill was a generous and passionate and long-time Lewis Ginter volunteer, perhaps he gave it to the Garden! Bill was quite a guy, and if you never knew him, I highly recommend you get to know him a bit by watching these videos where he tells you about his beloved magnolias, including his biggest success, ‘Ginter Spicy White.’ 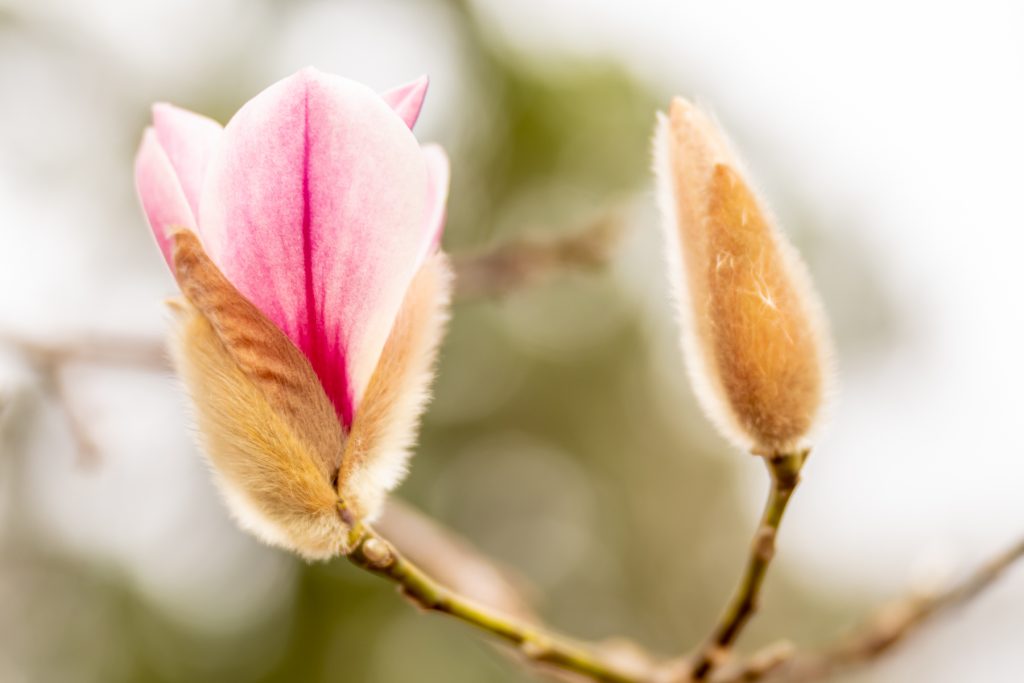 Magnolia amoena is just starting to bloom now! You can see it at the north end of Sydnor Lake at Lewis Ginter Botanical Garden. Image by Tom Hennessy.

To save this plant in the wild in its native habitat we need more research and legislation supporting the protection of its native range. Again, here’s the Red List:

Magnolia amoena is found only in China but is scattered across many provinces. …. It occurs in small scattered stands in hilly lowland mixed forest so the extent of occurrence is likely to be much less than the forest extent of 24,769 km2 and is estimated at less than 20,000 km2  …..The small scattered populations are under threat from a continuing decline in its extent of occurrence and area of habitat. Very poor seed production and the occurrence of few saplings under the parent trees is the result of bud-collection for medicinal purposes by the local inhabitants which is believed to be the greatest threat to this species.

To be moved by this beauty,  all you need is to come to see it in bloom.  It is graceful. It is lovely. It is mysterious. It is vulnerable. It is waiting for you. 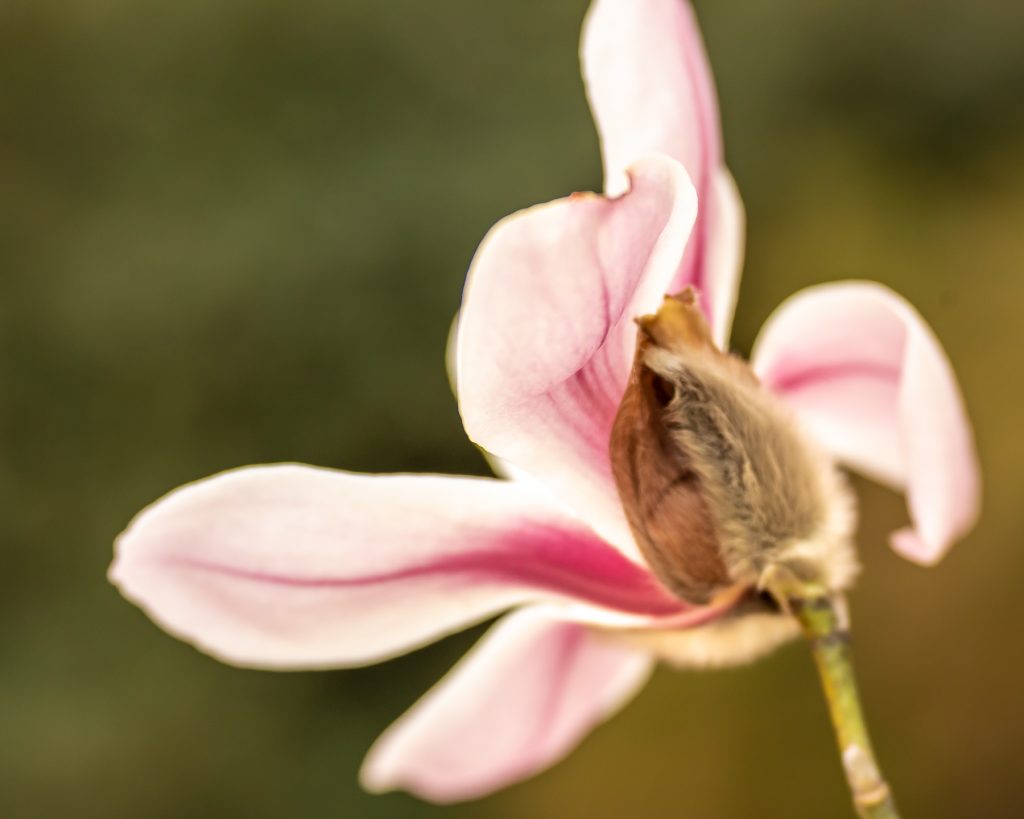 Magnolia amoena petals unfurling in pink and white with a furry pod breaking away. Image by Tom Hennessy.

Over the years, Smith has produced seeds from more than 250 different crosses using various magnolia species, hybrids and/or cultivars as parents.