More precisely, Catesby prints are visiting. Mark Catesby was a British naturalist who lived from 1682 (or 3) to 1749.  He came to Virginia in 1712 and stayed with his sister in Williamsburg.  He was sent by friends to collect botanical specimens and return them to London, where colonial plants were in great demand. Catesby returned to London in 1719 and delivered shells, bird skins and eggs, acorns, plants, and drawings that he made on his travels. His friends were so impressed by his attention to packing and shipping plants and other specimens that they recommended him to the Royal Society for a return mission. Other friends were impressed with his drawings and encouraged him to go back to the colonies to create a ‘Natural History’ of the new world.  He painted from life usually and the detail and accuracy of his work is remarkable. Catesby worked in watercolor and gouache. He may not have set out to paint birds and animals but we can imagine that he soon became enthralled with them and added many to his plant illustrations. He was not overly concerned with proportional representation and this made for some interesting combinations. For example, his bison is humorously dwarfed by the ‘Pseudo Acacia’ it stands under (print RL26090). This tree is now known as Robinia pseudoacacia or black locust. 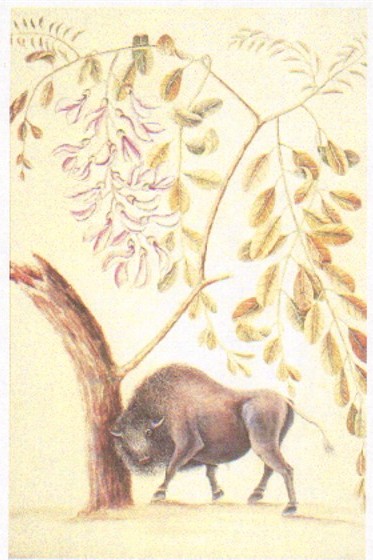 On his return to England after the second trip (1722-26), Catesby learned to etch his own plates so that his original drawings could be reproduced. The original watercolors were purchased by George III in 1768 and are owned by the Royal Library at Windsor Castle. To celebrate the 60th anniversary of the reign of Queen Elizabeth II and the 300th anniversary of Catesby’s arrival in Virginia, they are for the first time being reproduced for publication. Addison Publications of London offered us facsimiles for display during the time our garden is hosting the Council on Botanical and Horticultural Libraries annual meeting, April 29 – May 3. I had the pleasure and challenge of selecting 15 facsimiles for display; all were selected based on their representation of Virginia plants, animals, birds, insects, and reptiles. I like to imagine how our woods and fields looked to Catesby during his explorations and I’m very impressed that he could keep his papers and drawing supplies dry during his wanderings. He must have been very clever and determined to succeed.

Bibliographic details: the last 20 sets of this facsimile edition are being issued in four leather-bound volumes. Each set includes Catesby’s extensive description of the environment and its inhabitants. Indices are included that list Catesby’s Latin and English names alongside up-to-date scientific nomenclature and common names. More information on the four volume set is available at Addison Publications Ltd.